State-run oil company YPF SA needs to come up with more than US$1 billion to spur drilling in Patagonia, where the firm is leading development of the biggest shale patch outside the United States.

It’s not going to be easy. YPF restructured bonds last week to free up money to spend on shale, which demands a relentless cycle of drilling and fracking. But relatively few creditors took the new notes, and the company could only get US$630 million of relief from debt payments over the next two years. It wanted more than that and will have to take extra steps to achieve spending targets, according to a person familiar with the matter.

YPF is aiming for capital expenditures this year of US$2.7 billion, which includes US$1.3 billion in shale formation Vaca Muerta, as it tries to halt four years of production declines. After the coronavirus pandemic decimated revenue and the debt swap yielded limited results, getting there will require increasing fuel prices, cutting drilling costs, selling local debt, and maybe divesting assets.

At stake is not only the company’s growth strategy, but the future of Vaca Muerta itself as capital controls turn foreign drillers away. 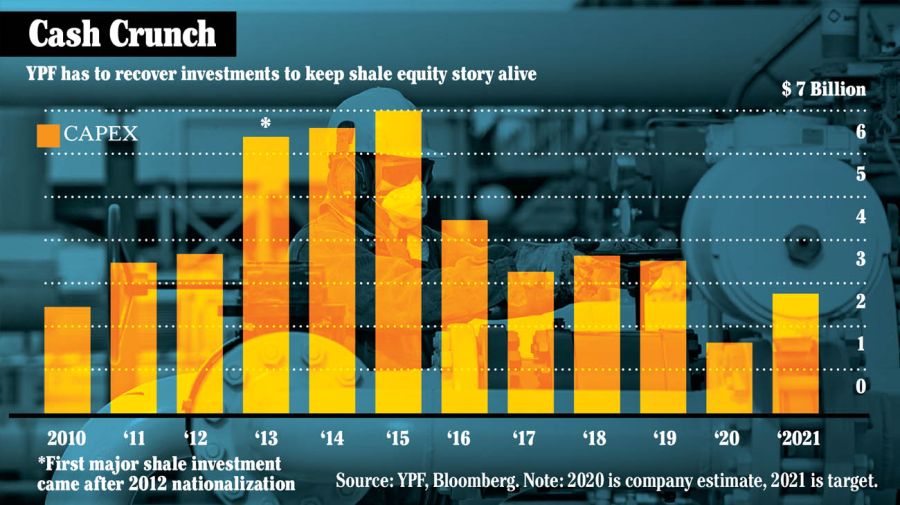 Fuel sales are particularly important because YPF refines most of the oil it produces. Demand for petrol and diesel has fallen because of the pandemic and prices for them in dollar terms are cheap, too, after years of government meddling to tame inflation.

“If you’re using YPF to subsidise consumers it won’t have capital to keep drilling,” Valle said.

The company needs to raise fuel prices this year by fiver percent in dollars, issue at least US$400 million on the local debt market, and keep lowering costs to reach the US$2.7 billion target, said Ezequiel Fernández, an equity analyst in Buenos Aires for Balanz Capital Valores.

That level of spending would allow YPF to grow crude production by 0.5 percent this year and keep natural gas production flat. It’s a fine line. Anything less than US$2.5 billion would mean another fall in output, Fernández said.

Shale currently accounts for about a fifth of YPF’s crude. It wants to increase that proportion to a quarter this year and to as much as half by 2023. It produced the equivalent of 468,500 barrels a day of oil and gas in the third quarter of 2020, which is similar to Marathon Oil Corp in the United States.