The United States supports "a vibrant Argentine economy," US Secretary of State Antony Blinken declared Tuesday as he received his Argentine counterpart Santiago Cafiero in Washington and called on Buenos Aires to outline a substantial economic plan for the coming years.

The duo met for talks as negotiations with the International Monetary Fund (IMF) continue, with Argentina seeking to refinance its multi-billion-dollar debt with the multilateral lender and restructure payments due in the next three years.

"Argentina is a friend and partner in our hemisphere and beyond," said the Joe Biden administration official as he settled down for his first face-to-face meeting with President Alberto Fernández's foreign minister.

"We strongly support a vibrant Argentine economy, which will only further strengthen our own partnership and Argentina's leadership in our hemisphere and beyond," Blinken added.

The duo spoke for an hour at the Thomas Jefferson Room of the US State Department, and sources inside the Foreign Ministry afterwards described it as a “good meeting.”

"Today there was strong support from the political wing of the United States," a senior official in Fernández's government told reporters in Washington.

The position of the United States, the IMF’s largest national shareholder, will be key if a new financing programme is to be agreed with the Argentine government.

The Fernández administration has said it will not be able to meet repayments due over the next three years that were agreed as part of the record US$57-billion credit line granted to the Mauricio Macri government in 2018.

According to a press release from the US State Department issued Tuesday evening, Cafirero and Blinken did discuss the IMF talks, with the US official encouraging “Argentina to put forward a strong economic policy framework that will return the country to growth.”

The Argentine government added in its own statement that Blinken "firmly supports the negotiations with the IMF and aspires to a prompt positive resolution."

The US secretary of state said "it is necessary to have the support of the United States at the International Monetary Fund, and thus not to restrict Argentina's growth," said the Foreign Ministry.

According to the statement, "Blinken said he strongly supports the negotiations with the IMF and hopes for an positiveearly resolution."

The US secretary of state on Tuesday highlighted the many "events and challenges" facing the United States and Argentina, the Americas and the rest of the world.

"We look forward to Argentina taking a leadership role in the [UN] Human Rights Council, where we hope to work closely together," said Blinken.

Argentina recently assumed the year-long presidency of the United Nations intergovernmental body, composed of 47 states and based in Geneva, for the first time in its history.

"We hope to work on a constructive agenda that involves human rights, climate change, disarmament and non-proliferation, as well as economic sustainability for development," he added.

"Thank you very much for making this meeting possible in the midst of the pandemic,” he told the US official.

Cafiero met with Blinken just days after Argentina's ambassador to Managua, Daniel Capitanich, attended the January 10 inauguration of Nicaraguan leader Daniel Ortega and his wife and vice-president, Rosario Murillo, whose re-election Washington considers to have been a "farce."

Iranian official Mohsen Rezai, one of the accused in the 1994 bombing of the AMIA Jewish centre that killed 85 people in Buenos Aires, was also in attendance, something the US State Department and Argentina’s opposition main coalition noted.

The following day, Argentina condemned Rezai's presence in Managua, considering it "an affront to Argentine justice and to the victims of the brutal terrorist attack against AMIA," which left 85 dead, injured hundreds and remains unpunished.

"The hemisphere cannot look the other way while Ortega-Murillo undermine democracy and regional security," tweeted US Assistant Secretary of State for the Americas Brian Nichols on Friday.

Nichols attended Tuesday’s meeting, as did Argentina’s Ambassador to the United States Argüello. Cafiero later met with influential Democrat and Speaker of the House of Representatives, Nancy Pelosi.

Notably, Argentina's statement did not make reference to the Iran-AMIA issue, unlike the read-out issued by Washington. A Foreign Ministry offificial confirmed that Argentina had discussed the issue, noting the need for international cooperation to enforce Interpol's red notices worldwide.

Foreign Ministry sources told the Noticias Argentinas news agency that Cafiero’s meeting with Blinken was the latest phase of the government’s plan to prepare the ground for a potential bilateral meeting between Fernández and Biden, a goal Ambassador Argüello has been working towards since he assumed the post..

Speaking in Buenos Aires last week, Government Spokeswoman Gabriela Cerruti said that the IMF agreement "is not just an economic issue" and that Cafiero was travelling to Washington to "carry out other types of meetings that have to do with geopolitical discussions."

The Fernández government, which refused to accept the remaining tranches of the IMF credit-line, the largest ever granted, upon taking office says it is seeking an agreement that will reduce Argentina's fiscal deficit through economic growth, not by cutting public spending. 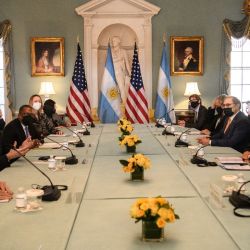 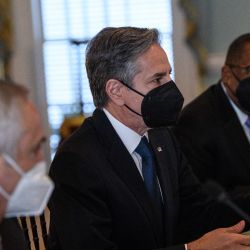 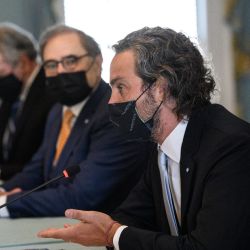