In a city of books, all are welcome.

This year’s Feria Internacional del Libro de Buenos Aires (“Buenos Aires International Book Fair”) is a 45,000-square-metre metropolis where stands are numbered like buildings on countless labelled calles (“streets”). Within it intersect the complexities of publication, access to literature and in-person porteño culture.

The Feria del Libro, which runs this year from April 28 to May 16, returned this week with its 46th edition, opening its doors to the public for the first time since 2019.

At the La Rural exhibition centre in Palermo, patrons flood in — residents who have visited the book fair all their lives, parents with their children, students in large groups. Less than an hour after doors opened, the city of books is already bustling.

According to the event’s organisers, it is the most popular book fair in the Spanish-speaking world. Lasting almost three weeks, it is visited by more than one million readers and more than 12,000 editorial professionals.

This year’s invited city is Havana, Cuba. More than 100 international writers will be in attendance, including Peruvian Nobel Prize winner Mario Vargas Llosa.

But though patrons are clearly overjoyed by the return of the fair after its two-year absence, not everyone shares in this sentiment.

Addressing a crowd of more than 1,000 people, Saccomanno delivered a scorching address that questioned the true role of the Feria del Libro — as a cultural tradition and as a commercial event — while highlighting the complicated situation facing publishers in Argentina.

“To say ‘fair’ implies saying commerce,” the renowned writer said. “This is a fair of the industry and not of culture, even though it claims this role. In any case, it is representative of a way of understanding culture as commerce in which the author, who is the main actor of the book, as creator, is paid barely 10 percent of the cover price of a copy.”

Continuing on his theme, Saccomanno observed that Argentina’s continued struggles with runaway inflation and the after-effects of the coronavirus pandemic weigh heavy for authors, leaving them with little to get by.

The Cámara Gesell author also noted that “to the paper shortage, due to the pandemic and the increase in energy costs in the world, we have to add the usual problems in our country: the paper industry is oligopolistic, paper is priced in dollars, and even when it is priced in dollars, there is inflation and no type of regulation from the State.”

The Feria’s warm environment carries a contrasting tone to that of Saccomanno’s pointed address, with patrons happily bustling, rushing from stand to stand and eagerly picking up books. Much of this excitement is undoubtedly linked to the joy of being able to attend the fair in-person, leafing through the pages of a future cherished tome.

For Raúl Robledo, sales manager for Grupo Editorial Planeta, the return to face-to-face events reinstates a long-awaited personal connection at the fair.

“The encounter between the reader and the writer is what was missing,” he told the Times, emphasising that this essential contact is “what people want, what they are looking for.”

His words ring true, as the multiple talks, signings and book presentations offered this year draw large crowds. Mariel Barrionuevo, a customer at the fair, said she was especially excited to attend.

“To come back a bit after the pandemic with such a massive and cultural event is great,” she said in an interview with the Times.

Barrionuevo hopes to return to the fair in the coming days with her young daughter. The fair, with all its complexity and prestige, is also a haven for kids. Stands feature statues of lovable characters, interactive drawing exhibits and colourful books within reach. Children can be seen taking off toward eye-catching displays — with parents running to catch up — or sitting on the floor reading together.

Leonardo Clerici, a patron who has been attending the fair since he was young, also emphasised the cultural role of the event.

“It marks Buenos Aires as a reference point as a cultural capital,” the 38-year-old told the Times. “It gives it an impetus, a force that we hope hasn’t been lost… over the years, with the appearance of computers, tablets, mobile phones.”

The return of the Buenos Aires International Book Fair will continue to represent a unique year in the history of the event. Even in an ever-evolving world of books that is increasingly more virtual, the importance of personal connection proves far from lost.

The crime of the precarious 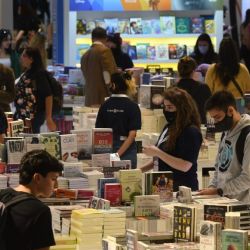 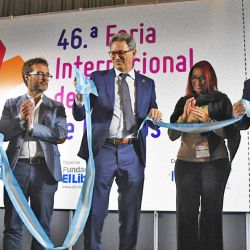