Tens of thousands of government supporters marched on Wednesday to the Plaza de Mayo, the historic epicentre of popular demonstrations in Argentina, to express their support for President Alberto Fernández, three days after an adverse result last Sunday's midterm legislative elections.

The November 17 ‘Dia de la Militancia’ rally, called by social organisations, trade unions and sectors of the ruling Frente de Todos coalition, was a show of unity that gathered under the slogan "Todos unidos triunfaremos" (“We will triumph together”), a line from the famous Peronist march sung at party rallies.

Addressing the crowd from a stage in front of the Casa Rosada, President Fernández told those present that his administration is “starting a new stage of government” in a euphoric speech lasting around 20 minutes. He told supporters that his coalition is unified, dismissing rumours of tensions and called on the opposition to help him "mobilise the economy" and ensure Argentina's economic recovery.

Highlighting five key pieces of legislation that he wanted Congress to pass, Fernández called on the opposition to "speak" and "give their opinion," claiming that his government is “waiting to mobilise the economy.”

"There are five laws that are very important to me and that have to do with the future of Argentina,” he said, citing planned bills addressing hydrocarbons, the agricultural industry, rules on purchasing and producers, electromobility and the automotive industry," Fernández detailed.

In his address to the crowd, Fernández vowed to "guarantee that genuine employment is created," and said "education, public health and science and technology" would not be forgotten in the remainder of his term.

"There is a president and a vice-president [former president Cristina Fernández de Kirchner] who want to work in the same direction," said the president.

"Let us begin to put the nuances and differences on the table, so that we can reach [the next election in 2023] with all the strength we need," he concluded.

Not all sectors seemed to be on the same page, however, despite the remarks. According to multiple local outlets, the main leaders of the La Cámpra militant youth organisation, which is closely linked to Kirchnerism, marched together as a column, yet only arrived at the Plaza de Mayo after the president's speech had taken place. Party spokespeople put the error down to expectations that the president would begin his speech late.

The government has hailed its comeback performance in last Sunday’s vote as a “triumph,” highlighting its improved performance in relation to the September PASO primaries. In the midterms, the government won around 7.6 million votes nationwide, compared to 9.7 million for the opposition Juntos por el Cambio coalition.

Final results are yet to be fully confirmed, though with 98 percent polling stations reporting, the ruling coalition looks on track to lose its majority in the Senate, slipping to 35 seats – two short. It remains the largest bloc, however, in both the lower and upper house of Congress.

"In the PASO [primaries], the ballot boxes left us a message and we heard that message. We also heard the message in Sunday's elections. I am very clear that there is much to do and there are many who are waiting for this government to do much more – and we are going to do it," declared Fernández on Wednesday.

"I've heard a lot these days: 'If they lost, what do they celebrate?' Triumph is not only winning, but about never giving up. Today what we are celebrating here is that the militancy went to raise its arms for the one who was defeated," declared the president, who was the only speaker at the event.

Inviting the opposition to "build this country together" with dialogue, though saying he wouldn’t work with sectors that “express hatred," the president once again took aim at his predecessor in office, Mauricio Macri, as he sought to stoke tensions in the opposition front.

Among the issues on the table are Argentina’s pressing US$44-billion debt with the International Monetary Fund, which needs to be restructured by March next year when key repayments begin. ‘Once and for all’

Fernández said that "the first objective is to recover the economy once and for all" as he sought to make his case for the remainder of his presidency, which is due to end in 2023.

Argentina is beginning to emerge from the recession it entered in 2018, which was aggravated by the coronavirus pandemic and the lengthy quarantine period imposed by the government to tackle the virus crisis.

"We are kicking off the second stage of our government," said the Peronist leader, who called on his supporters to "take to the streets" and support his administration’s efforts.

"We have to do what is necessary so that in 2023 we can ensure a resounding victory," said Fernández, referring to Argentina’s next presidential election.

Speaking prior to the event, the government briefed reporters that “more than 100,000 people” were expected to flock to the Plaza de Mayo for the event, which also included representation from the Kirchnerite wing of the ruling coalition.

The rally was originally intended to “shield” the president from criticism following defeat in the midterms. The ruling coalition’s better-than-anticipated performance instead led to a mobilisation of representatives from all sectors of Frente de Todos in a bid to relaunch the government and President Fernández’s second half of his term in office.

Responding to the rally, lawmakers from the Juntos por el Cambio opposition coalition accused the president of “inventing triumphs and celebrating illusions” rather than “solving problems.”

Following last Sunday’s election, President Fernández said his government would “open a dialogue” with the opposition in order to seek agreements on a number of issues, but the fiery rhetoric on display on Wednesday seems to have damaged that attempt before it has even begun.

"The president was not strengthened but weakened by an act that only underlined the differences that exist in the Frente de Todos," said Mario Negri, the head of the opposition’s bloc in the lower house Chamber of Deputies. “While they are sorting themselves out, the problems of Argentines are getting worse."

For his part, senator-elect and UCR leader Alfredo Cornejo said in a post on Twitter that Fernández had “wasted a unique opportunity" with his speech.

“Denial and aggression is the complete opposite of the dialogue," said the Mendoza leader in a post on Twitter. 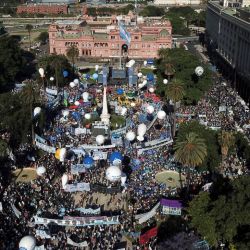 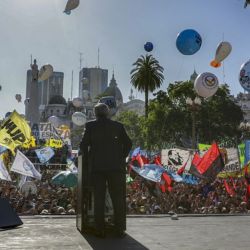