Local paleontologists have unveiled the replica of a 65-million-year-old skeleton of a plesiosaur marine reptile found in Lago Argentino in 2009.

"We've been working since 2009 until now to liberate the fossil from the rock surrounding it, making a reproduction and hanging it here in the museum hall," paleontologist Fernando Novas of the Bernardino Rivadavia Natural Science Museum in Buenos Aires told the AFP news agency in an interview.

The fossil is of a marine reptile found in Cretaceous period rocks close to the southern town of El Calafate, 2,800 kilometers (1,700 miles) from the capital.

The remains of this plesiosaur are the most complete found in the country and were discovered in rocks submerged in Lake Argentino at the foot of the Andes mountains.

"It was around 50 centimetres (1.64 feet) under the water and part of the lake had to be drained to take out the rocks," said scientist Marcelo Isasi.

Four tons of rocks had to be removed to unearth the fossil remains, found just 500 metres (1,640 feet) from an international airport. 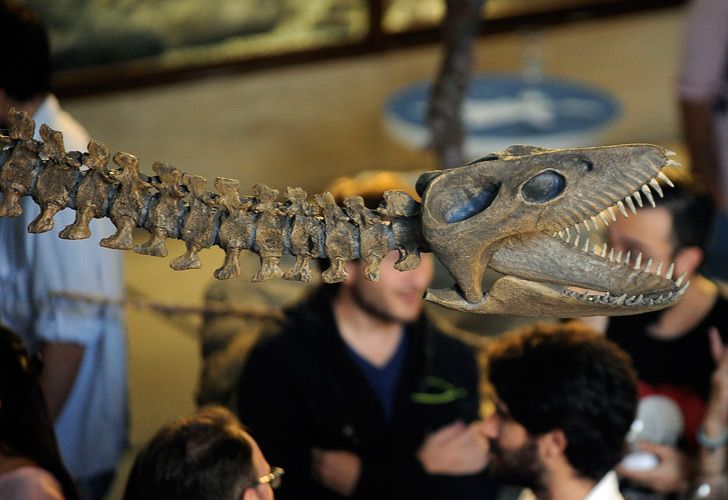 It was an era before the Andes existed and when Patagonia lay underwater.

The fossil is nine meters long with each fin measuring 1.3 meters.