Thousands of people gathered in Plaza de Mayo yesterday to join a political celebration marking the Day of Democracy and Human Rights in Argentina.

Peronist and unionist groups from across the country descended on Buenos Aires for the ‘#10D’ event, called by the national government, which was headlined by four speeches from President Alberto Fernández, Vice-President Cristina Fernández de Kirchner and the former presidents of Brazil, Luiz Inácio "Lula" da Silva, and Uruguay, José ‘Pepe’ Mujica.

Under the slogan "Democracy forever," the celebrations marked 38 years since the restoration of democracy in Argentina and the inauguration of Raúl Alfonsín as president.

The main show came at around 7.30pm, when the four leaders took to the stage for a political love-in.

After Mujica had told the crowd to treasure and cherish democracy, which he admitted was imperfect as “we humans are,” Lula hailed the previous "progressive and humanist" governments that previously led Argentina, Brazil and Uruguay in his own speech, calling it "the best moment for democracy in our homeland, in our beloved Latin America."

Fernández de Kirchner, turning more national in her tone, lashed out at the Mauricio Macri administration while praising the Mothers and Grandmothers of Plaza de Mayo for their human rights work. She then went on to list the achievements of her and her late husband Néstor Kirchner’s administrations.

President Alberto Fernández was the final speaker. He confirmed before the crowd that he would pay down Argentina's US$44-billion debt with the International Monetary Fund (IMF), though he said he would not apply austerity measures that "compromise growth."

"We are going to fulfil the obligations assumed by others," he said, referencing the deal agreed by his predecessor, Mauricio Macri.

"But the day we take on these obligations as our own, it will not be at the expense of public health, public education, salaries or pensions. The Argentina of adjustment is history, there is no more chance of that happening," he told the crowd.

"We are not the ones who don't want to pay debts, nor are we the ones who took it, we are the ones who have to take care of the debts that the scoundrels left to us," Fernández declared, slamming the opposition.

The president spoke hours after the IMF issued a statement in which he considered that "there had been progress" in talks over the last week in meetings between technical teams from Argentina and the IMF, but that "further discussions" were necessary.

The president insisted that he will take "all the time it takes to ensure that the agreement serves us Argentines as a country."

Earlier, Fernández de Kirchner had indicated her discontent with the multilateral lender, saying in a speech that she was "a little distrustful" of the IMF.

"The Fund has been conditioning democracy," said the former president, who recalled previous clashes under her late husband Néstor Kirchner's government

"I know we have many difficulties, but in the face of great adversity. It is said that Argentina lacks dollars – it is not that there is a lack of dollars, it is that they have been taken away. We need the Fund to help us recover billions that have gone to tax havens," said the vice-president.

Lula, who was showered with praise by Argentina's president and vice-president, also looked back with his remarks, saying he had the "good fortune" to be in office at the same time as the Kirchners in Argentina and the other leaders of Latin America's so-called 'Pink Tide' era,

Both Mujica, Fernández and Fernández de Kirchner expressed their desire for Lula to return to power in Brazil.

"I have held many offices, but today I assume the office of presenting the incredible comrade and friend Lula, who is going to be the president of Brazil," said Mujica.

Previous to the event, the four leaders had presented the Azucena Villaflor awards to prominent personalities for their work in the defence of human rights at the Casa Rosada Bicentennial Museum. 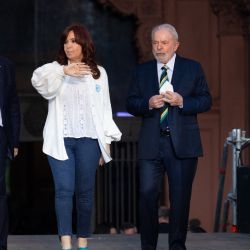 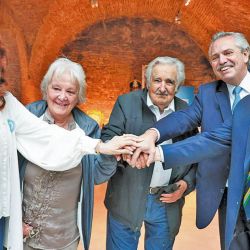 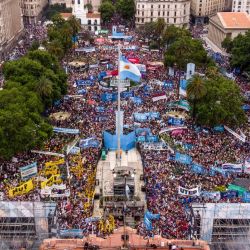