Lawmakers in the Chamber of Deputies approved the government's bill to legalise abortion in the early Friday morning, paving the way for a momentous vote in the Senate before the year is out.

To cheers inside the lower house and wild celebrations outside on the streets, the bill was passed with 131 votes in favour, 117 against and six abstentions.

The vote came at the end of an epic session in Congress. Lawmakers opened debate on the initiative at 11am on Thursday, with deputies continuing to put their case to the floor well past midnight and into the following morning.

Eagerly awaiting the vote, protesters from both sides of the divide gathered outside the National Congress building in scenes reminiscent of those of two years ago, when the bill passed through the lower house but was narrowly rejected by the traditionally more conservative Senate.

"Legal abortion now, safe and free," chanted pro-abortion activists wearing the green scarves which have become a symbol of their cause.

"It's a question of public health, social justice and human rights," Valeria Bonetto, a 48-year-old doctor, told AFP as she demonstrated.

On the other side of a fence erected by police to keep the two groups apart, women in sky-blue scarves planned a "March for the Unborn Baby" for late Thursday, calling on lawmakers to "save both lives."

In Argentina, abortion is only permitted in cases of rape or danger to the woman's life, under a 1921 law.

This is the ninth time in majority-Catholic Argentina – homeland of Pope Francis – that a bill to legalise abortion has been presented in Congress.

President Alberto Fernández announced last month he was bringing in the new bill, having promised the legislation during last year's presidential election campaign. The bill allows for voluntary abortions to be carried out up to the 14th week of pregnancy.

A majority of 129 of the 257 votes were needed to approve the bill. Around half a dozen deputies were said to be undecided before the session opened, with the ruling Frente de Todos coalition confident it had the votes to carry the measure.

A bill introduced under the previous centre-right government of Mauricio Macri won approval in 2018, in a tight lower house vote before being rejected days later in the Senate, by 38 votes to 31, with two abstentions.

Both houses welcomed new members in the 2019 general elections.

Fernández has made some political gestures to opponents of abortion, pledging another bill, called the '1,000 Days Plan,' which would provide greater support to poorer families to avoid them having to resort to an abortion for financial reasons. That won wide support in the lower house on Friday morning, win 196 votes in favour and five absentions.

The abortion bill also allows for the conscientious objection of doctors who may refuse to carry out the procedure on religious grounds. However, they will be obliged to refer the patient for care in another hospital.

"The debate is not about abortion yes or no, but about safe abortion or unsafe abortion," lawmaker Ana Carolina Gaillard (Frente de Todos) coalition said during the debate, referring to the deaths of some 3,000 women in clandestine abortions in Argentina since 1983.

Martín Maquieyra (PRO-Juntos por el Cambio) called on lawmakers to "choose the difficult path, that of sex education and contraceptives," rather than termination.

"We need a state that accompanies its people and does not discard them. What kind of a country would Argentina be if we selected who was born," he argued.

Argentine women and girls undergo between 370,000 and 520,000 clandestine abortions annually, with 39,000 hospitalisations each year, according to government statistics.

The Senate is expected to begin discussing the abortion bill in committee stage this Monday, with the upper house likely to to vote on the initiative sometime between December 28 and 30.

According to a tally kept by the La Nación daily, 36 senators have said would back the bill in its current form, while 35 have said they will reject it. One senator is yet to define their position. In the event of a tie, Vice-President Cristina Fernández de Kirchner, in her role as head of the Senate, would cast the deciding vote. 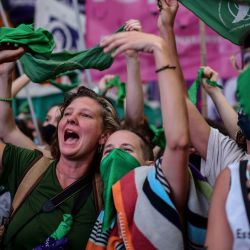 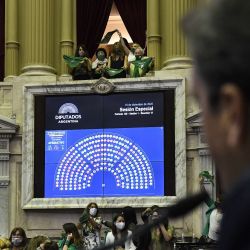 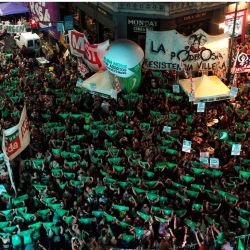