As surely as the rains fall and flowers blossom, the Northern Hemisphere awakens every June to another, less inspiring rite of spring — a new peak level for global atmospheric carbon dioxide. This year, that number is 419 CO₂ molecules for every million molecules of air, aka parts per million.

Based on geological evidence collected over the six decades scientists have been tracking atmospheric CO₂, this year's peak appears to be the highest in as long as 4.5 million years. This continued accumulation of greenhouse gas is driving dangerous global heating around the world.

In 1958, when modern measurements began, atmospheric CO₂ was at 316 ppm. Three centuries ago, before the beginning of the industrial age, geological records show that number was 280 ppm. In other words, by burning fossil fuels in generators and cars, humanity has increased concentrations of the most important greenhouse gas by 50 percent. 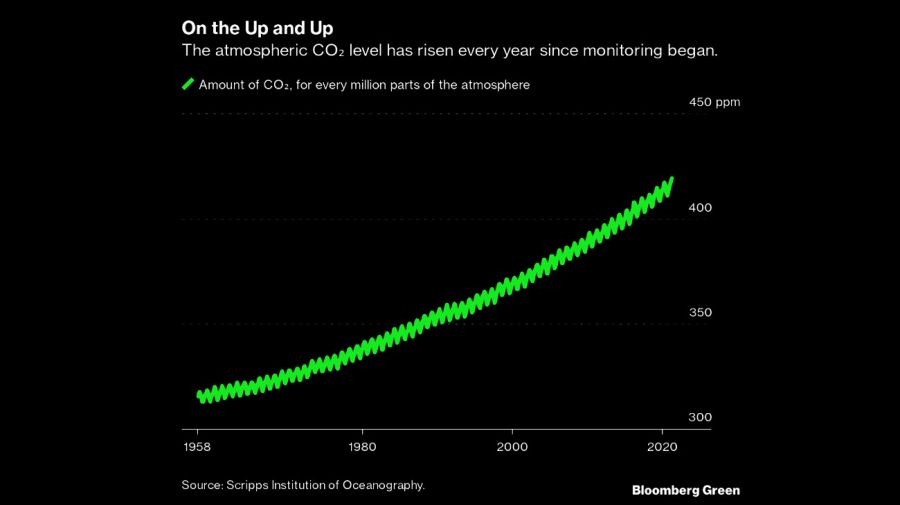 Two organisations have kept the historical record over the past six decades. The Scripps Institution of Oceanography pioneered the practice when climate scientist Charles David Keeling set up his equipment on Hawaii's Mauna Loa volcano. The National Oceanic and Atmospheric Administration followed in 1974.

Pandemic-related economic disruptions that drastically reduced emissions had practically no effect  on the trajectory of CO₂, a finding researchers predicted as early as April 2020. The May average rose by 1.8 ppm over May 2020, slightly less than the annual growth rate for 2017 and 2011. Atmospheric CO₂ concentrations fluctuate year by year, and averaged about 2.5 ppm a year from 2010 to 2019. The numbers aren't determined solely by pollution, but also depend on variations in the rate that oceans and plants soak up CO₂. The atmospheric concentration follows a seasonal cycle, peaking typically in May, when plants in the Northern Hemisphere — where most of them live — begin drawing CO₂ into tissue.

“The ultimate control knob on atmospheric CO₂ is fossil-fuel emissions,” said Ralph Keeling, a geochemist at Scripps and son of the scientist who launched measurements in 1958, “but we still have a long way to go to halt the rise, as each year more CO₂ piles up in the atmosphere. We ultimately need cuts that are much larger and sustained longer than the COVID-related shutdowns of 2020."