A year after Brazil’s most famous city hosted the Olympic Games, a grinding economic crisis has led to an influx of thousands of homeless people, creating a climate of tension and violence that city officials are scrambling to address.

One night about a year ago, Leandro Mota Generoso was sleeping on a street in downtown Rio de Janeiro when he felt something jagged strike his face. Somebody – he didn’t see the person, but believes it was a resident in the neighbourhood – had slashed his nose with broken glass from a vodka bottle. He awoke in a pool of blood.

“I can’t sleep at night anymore,” said Generoso, 23, who has been homeless since the grandfather who was raising him died five years ago. “To many people, we are rats, garbage or whatever thing.” “That is the reality, and now there are many more homeless in the streets,” he added. A year after Rio de Janeiro hosted the Olympic Games, a grinding economic crisis has led to an influx of thousands of homeless people, creating a climate of tension that city officials are scrambling to address.

Warm temperatures and miles of beaches have long made Brazil’s most famous city a place with a large street population. But city officials say it’s more than tripled in the last few years, to an estimated 15,000 people. While many US cities have experienced sharp increases in people living outdoors thanks to rising housing prices amid a recovering economy, in Rio the driving factors have been fallout from Brazil’s worst recession in decades and long-standing inequalities.

Today’s homeless in Rio include thousands who came from other states for work before the 2014 World Cup and 2016 Rio Olympics and subsequently lost their jobs.

“Rio de Janeiro is facing the worst possible scenario when it comes to the homeless,” said Pedro Fernandes, the city’s secretary of social assistance and human rights. “We have never had such a large number in the streets.”

Tensions have been steadily increasing, particularly in affluent and touristy neighbourhoods where residents and businesses are frustrated with the throngs of people sleeping on the streets. In August, a residential building in the iconic Copacabana neighbourhood installed sprinklers below its awnings to rouse unwanted campers below. The city later forced the sprinklers to be removed. People in several affluent neighbourhoods post messages on community Facebook groups urging police to act and imploring neighbours not to feed the homeless.

In some cases, violence has erupted. Forty-year-old Fernanda Rodrigues dos Santos was fatally shot in the chest while sleeping in the street in Copacabana in October. Police say 24-year-old Rodrigo Gomes Rodrigues, a medical student who lives in the neighbourhood, has confessed to the killing. Police say he and a friend argued earlier in the night with another homeless person, went to get a gun and returned looking for revenge.

“How many Fernandas are still in the streets?” said Wilham Rodrigues dos Santos, Fernanda’s brother. “We can’t accept that this aggression becomes normal.”

Carla Beatriz Nunes Maia, from the Public Defender’s office, has been leading visits to the homeless at night to get a sense of what they are facing. She says complaints about rough-handed tactics by police have given way to even more complaints about friction with residents in affluent neighbourhoods. “There is a repressive movement to keep people from helping the homeless,” said Maia, referring to the calls on social  media not to give food or money. The city has launched an initiative to spruce up shelters and persuade more homeless people to use them. Many shun shelters because they often have strict rules and, by the city’s own acknowledgement, have fallen into disrepair, with infestations of bugs and filthy bathrooms.

“You may go into a shelter healthy, but then how will you come out?” said Nancy Gouveia, a 49-year-old who has been on the streets three years. When her marriage broke up, the former housewife with no work experience said she had nowhere to go but the street. While many people have helped her, she said she has also had water and diesel thrown on her.

A man once tried to light her on fire while she slept. “All of us on the street want to get off it. But how?” Gouveia said as she lay on a frayed cushion in front of a bank near the ocean in Copacabana.

Sitting on a chair next to Gouveia, Patricio Santos added there would be no change until the economy improves.
“We need jobs,” said Santos, 34, who has been on the streets six months since losing his job as a telemarketer. While some of the nearly 2,200 beds in shelters go empty each night, successfully persuading more homeless people to use them could create its own problems, as there are vastly more potential users than space for them. Given that reality, the city is also working to help migrants return to their home states, and in some cases even other countries.

Despite the grim situation, there are signs of hope. Though growth is tepid, Brazil officially emerged from recession earlier this year. And city officials say some businesses are donating food and clothes as well as providing jobs for some homeless. On a recent day, hundreds of homeless showed up at a park where the city offered services ranging from free haircuts to recovering documents and help with job searches. One of those who showed up was Generoso, who wanted more information about a shelter where he might be able to stop worrying about being attacked again. “I want to find a place to sleep,” he said. “There is only misery on the streets.” 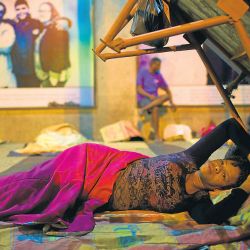 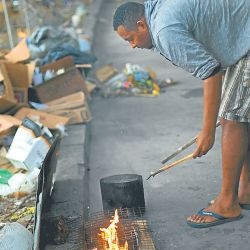