Last year, a video of a Chinese fishing vessel, the Lu Qing Yuan Yu 206, went viral in Argentina and Uruguay. It shows footage of crew members onboard the ship in the Port of Montevideo, trying to lift something up from below-deck, into the open-air.

After a few seconds, a huge lifeless mammal comes into frame, with a harness gripped tightly around its neck.

As the crew attempts to raise the enormous animal from the hold, the rope of the harness begins to strain against the weight of the carcass. The corpse and the rope begin a horrible dance of death, twirling into a spiral before the crew manages to regain control and set it down.

There, on the deck, lies a large dead elephant seal, a protected species whose capture is strictly banned in Argentine and Uruguayan waters.

The Lu Qing Yuan Yu 206 has been stationed in Montevideo since 2014, fishing regularly on the edge of Argentina’s Economic Exclusive Zone (EEZ). Many other fleets, from shores such as China, Taiwan, South Korea and Spain, regularly do the same.

EEZs are areas extending 200 nautical miles from the coastline, reserved to countries that adhere to the United Nations Convention on the Law of the Sea. As foreign vessels don’t have licenses to fish within Argentina’s EEZ, they instead concentrate on the waters close to the outer limits, where they can find plenty of migratory species.

The fishing vessels are in search of squid, mackerel and other species and will often stop off at the port of Montevideo for logistical needs. The number of vessels has grown steadily over the past two decades, going from about 20 in 2001 to around 500 now, an increase which has caused several disputes with the local authorities.

There are 50 species of marine mammals that live in the waters of Argentina and Uruguay, including sea lions, elephant seals, dolphins and whales. Most are classified as “vulnerable” or “threatened,” as they have lost part of their habitat or been affected by fishing vessels, which unintentionally capture them as they go about their trade.

While these animals are technically protected by local and international legislation, and their capture is strictly banned both in Argentina and Uruguay, reports of intentional catch have been growing in recent years, raising concerns among conservationists. If this is a generalised problem, witnessed in many other areas, it would make the animals even more vulnerable to extinction, they argue.

A fisheries observer who lives in Argentina, who has more than 30 years’ experience in the sector and asked not to be named in order to speak freely, said that he has seen crew members onboard foreign vessels harpooning sea lions and elephant seals and then storing them in the cargo area. They would then eat parts of the body, including the penis and the testicles, as they are believed to have aphrodisiac properties.

“The [vessels] would easily go in and out of the EEZ of Argentina due to the lack of control and then use the port of Montevideo, as they wouldn’t have much difficulties with port authorities. I tried to stop them, telling them it was forbidden, but they didn’t care,” he said.

Dominic Thomson, EJF’s deputy director, said that the crew would turn off the vessel’s lights and tracking system, then use squid as bait to lure sea lions and elephant seals to their deaths with harpoons. Hiding their bodies in the machine room, the teeth, liver and genitals of the animals would later be sold on the black market.

One of the ships, Oyang 77, was prosecuted for illegal fishing within the Argentine Sea in 2019, with its crew admitting to having broken the law. That vessel, and another, the Oyang 75, have both been denounced by conservationists since their arrival in Montevideo in 2014 for illegal fishing, the capture of threatened species and human rights abuses.

“We are barely scratching the surface of the true extent of marine mammals' capture,” Thomson said in an interview. “Crew members would get up to US$60 or more for a small sea lion tooth, for example. The bodies would also be eaten as supplementary food, as the drinking water and food supplied to the crew is usually very poor.”

The port of Montevideo

The port of Montevideo has been singled out by dozens of studies from local and international organisations as part of a network that enables the trafficking of illegally caught marine life. More than 300 foreign vessels used its facilities last year but only 34 were inspected, according to official figures. Locals do not doubt that illegal behaviour is rife. Deceased humans have even been unloaded and brought ashore by vessels.

Andrés Milessi is the head of Oceanosanos, an Uruguayan NGO that has been regularly tracking the developments at the port. He describes the issue as a “hot potato” for the government. From permits granted to inspections being done, everything should be reconsidered, Milessi argues, though he concedes it’s a complex problem to the authorities to address.

Jaime Coronel, Uruguay’s national director of aquatic resources, says that while not “all illegal fishing can be ruled out” in Montevideo, controls have recently stepped up. He said no irregular situations involving marine mammals had been observed at the port.

“It’s the best port to use in the Atlantic, with a massive logistic capacity that foreign vessels rely on,” Coronel said. “We check every vessel that uses the port. They have to inform what they bring in their cargo and sign an affidavit acknowledging that they haven’t fished in the EEZ of other countries.”

Most of the foreign vessels that have been accused of involvement in the illegal capture of marine mammals have been docked in Montevideo, so there’s a strong possibility of the organs being trafficked out of the port, says Milko Schvartzman, an Argentine marine conservation expert.

“They [the vessels] mainly fish off the coast of Argentina, near the colonies where marine mammals live, and then unload in Montevideo. The animals have been tracked with GPS and they feed in the same area where the vessels are. We knew about incidental captures in the past – but here, it’s all intentional,” Schvartzman said.

Uruguay has the largest sea lion colony in South America, and permitted hunting as recently as the 1970s. Everything was exported, from the organs to the fur, through a state agency called ILPE. Now, the country only exports live sea lions for marine aquariums.

Silvina Dans, a marine mammal expert at Argentina’s CONICET research institute, said genitals were the body part most traded by Uruguay historically. They are especially prized by Asian countries. “The meat wasn’t much wanted, but the genitals were particularly relevant due to their alleged aphrodisiac or healing effects,” she added.

There’s anecdotal information about the use of marine mammal parts in traditional medicines and tinctures in Asian societies. All the countries of Southeast Asia and four in East Asia (South Korea, Taiwan, Japan and China) currently report direct takes.

Derivatives from at least 20 species are detailed in Chinese pharmacopeia. The most commonly listed ingredients are oil, pancreas and liver, prescribed for intestinal disorders, inflammation, and a variety of skin conditions. The penises of several different species of seals are also believed to “cure” male impotence.

A search on Taobao, China’s most famous online shopping platform, found more than 400 products of Wa Na Qi and Hai Gou Shen – traditional male impotence medicine made mainly from seal penises. These are capsules, pills, oral liquids and tablets that are also available in Chinese pharmacies.

Conservationists and marine experts are calling for further action to avoid the intentional capture of marine mammals in the Southwest Atlantic Ocean. One of their most requested measures is the creation of a regional initiative to regulate fishing activity on the high seas (areas beyond national waters) which would allow fishing activity to be monitored.

While this could take many forms, one of the suggested mechanisms are regional fisheries management organisations (RFMOs), which facilitate cooperation between governments and are responsible for assessing resources, monitoring vessels and adopting conservation measures, among other things.

There are already two RFMOs specifically for tuna covering the Atlantic Ocean, but not for the many other species fished in the area. While RFMOs focus on protecting fish and not on marine mammals, they would indirectly benefit from stricter control on fishing vessels, conservation experts agree.

“We need a consensus between coastal countries outside of their EEZ. If not, the number of foreign vessels will keep growing and the amount of fishing resources declining. There has to be obligations for vessels working on the high seas,” said Eduardo Pucci, the Organisation for the Protection of Resources in the Southwest Atlantic (OPRAS).

Under the UN Convention on the Law of the Sea (UNCLOS), countries have an obligation to cooperate on conserving ocean life on the high seas, and to develop management measures if they are exploiting the same resources as other countries. States are even requested to establish regional fisheries organisations, such as RFMOs.

Coastal states in the Southwest Atlantic have not agreed on any management and governance formula for international waters. Uruguay has recently held conversations with Argentina and Brazil to set up a regional organisation, but no progress has been achieved so far, with Argentina expressing doubts over RFMOs.

Countries worldwide are currently negotiating a landmark global landmark agreement known as the BBNJ (biodiversity beyond national jurisdiction) to protect the high seas, which cover two-thirds of the ocean. This accord has been highlighted by marine experts as a way to deter illegal capture of marine mammals and illegal fishing.

Inside EEZs, meanwhile, experts highlight the importance of increasing controls at ports, as this would deter any potential black market trade in marine mammals' organs.

Uruguay has been one of the early adopters of the Port State Measures Agreement (PSMA), a key global treaty that has shored up port policies in order to prevent illegally caught fish from entering the market. Vessels are supposed to be subject to increased inspections, which would make it more difficult to traffic marine mammals through ports.

The agreement, which has also been signed by Chile but not by Argentina, has led to Uruguay taking further action, particularly at the port of Montevideo, over the past few years, Coronel said. This is questioned by conservationists, who argue the government should increase controls.

“Nothing has really improved, it’s a political problem,” said Milessi. “Every foreign vessel that uses the port of Montevideo represents thousands of dollars in income for the government. It’s a lot of money for a very small country.”

Dominic Thomson, from EJN, suggests installing live cameras on vessels, an approach that was trialled by Korea but hasn’t been adopted widely. This could also be complemented with human observers on board as an additional layer of security. “Vessels can spend six to nine months at sea without anyone inspecting their actions,” he added.

Argentina’s Navy was consulted for this story but they did not wish to comment.

Poverty, frustration and contempt: Lima's forgotten people in the Andes 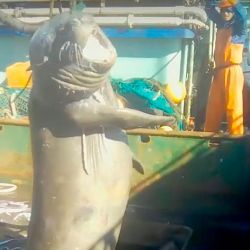 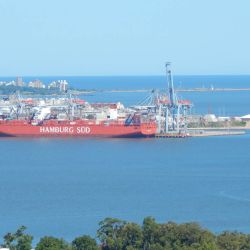 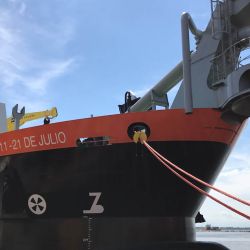 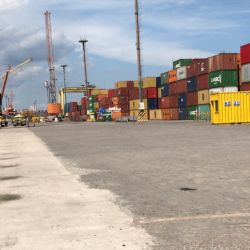 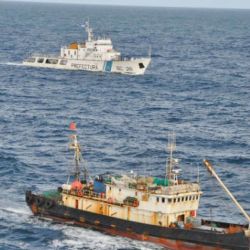