Hawking his goods by the roadside in the northeast town of Salgueiro, travelling salesman Matheus Silva has a new line in this election year in Brazil.

Alongside the windshield wipers, car seat covers and hammocks that are his mainstay, on a recent weekday Silva was selling towels at 35 reais (US$7) apiece featuring the two main candidates for the presidency. By late afternoon he’d sold four showing President Jair Bolsonaro, and six of his likely challenger, Luiz Inácio Lula da Silva — but, he added, he’d shifted more Bolsonaros earlier in the neighbouring town of Cabrobo.

After a turbulent four-year term that saw him dismiss Covid-19, take on the Judiciary and roll back protections for the Amazon, Bolsonaro, 67, is trailing the former president in polls for October’s presidential election. But signs of support even in places like Salgueiro —  in Lula’s home state of Pernambuco, no less — suggest the incumbent isn’t down and out just yet.

A tour of three states in the so-called sertão, or hinterland, of Brazil’s northeast in mid-February showed that the strongest headwinds to Bolsonaro’s re-election come less from his most controversial policies than a weak economy and rampant inflation that are hitting the poor hardest.

Rather than translating into rock solid support for his opponent Lula, 76, however, many people were undecided how to vote.

If the president does have a chance of turning the tide in his favour, it’s because of his programme of cash assistance for the poorest families. In particular, his flagship government subsidy, the “Auxilio Brasil,” has become crucial to his electoral fortunes — and Bolsonaro’s performance in the northeast will be a key indicator of whether it can help him pick up enough votes to win a second term.

“The northeast will be this election’s battlefield,” said Creomar de Souza, chief executive officer at Dharma Political Risk and Strategy, a Brasilia-based consultancy. “It’s where Lula and Bolsonaro will measure their strength.”

Brazil’s election is shaping up to be a bruising contest between polar opposites on the political spectrum to determine the direction of Latin America’s biggest economy at a time of change. Leftist leaders have taken power this past year in Peru and Chile, and may win in Colombia, as anger grows across the resource-rich region at inequalities that were exposed and aggravated by the pandemic.

In Brazil, the divide is geographical. The southeast region that includes the financial centre of São Paulo accounted for some 55 percent of Brazil’s economic output last year, according to estimates by LCA Consultores. That compares to 13 percent for the northeast; only the sparsely populated northern region was lower. Consequently, the northeast region has more households in receipt of the Auxilio Brasil than any other.

It’s also the only one of Brazil’s five regions that Bolsonaro failed to win in 2018. But with around 30 percent of the country’s 215 million-strong population, his campaign team sees it as key to his chances of taking the country.

That helps explain why the president has visited the region more than any other in the past year, clocking up 31 trips through the end of March, including most recently on March 30.

Bolsonaro won’t win in the northeast, his chief-of+staff, Ciro Nogueira, acknowledged in an interview with TV Globo aired last month. “But he will have a much higher vote than he had in the last election,” said Nogueira. “Overall, I think Lula wins in the northeast, but he will lose in the rest of the country in a very significant way.”

Government subsidies are set to shape that outcome. Brazil’s poverty rate fell to an all-time low of 4.8 percent of the population in August 2020 as the Bolsonaro government paid 600 reais per month to poor families at the height of the pandemic’s first wave — coinciding with a peak in the president’s approval rating. When handouts were halved in October 2021, poverty levels shot back up to 13 percent. The government is now paying 400 reais to a smaller number of families. On average, Auxilio Brasil is double what was paid by Bolsa Familia, the Lula government equivalent.

US needs to see more from Maduro to ease Venezuela sanctions

On paydays, queues form around the block of bank branches as people line up to receive what for some is their only regular source of income.

That’s the case for Francisca Vieira Gomes, 53, and her family outside Brejo Santo, a town of about 50,000 in the interior of the northeast state of Ceara. She lives with her husband, a 26-year-old son, her daughter-in-law and three small grandchildren in a makeshift house of wood and clay whose roof is partly covered with a plastic sheet.

No-one in the house has formal work. The gas canister ran out two months earlier and she was using a wood-burning stove to cook. Sometimes, she says, she goes hungry.

“When Bolsonaro gave us this money, he helped a lot,” Gomes said. She still doesn’t know who she’ll vote for, though. “The situation here is difficult,” she added. “Only God knows who will win.” 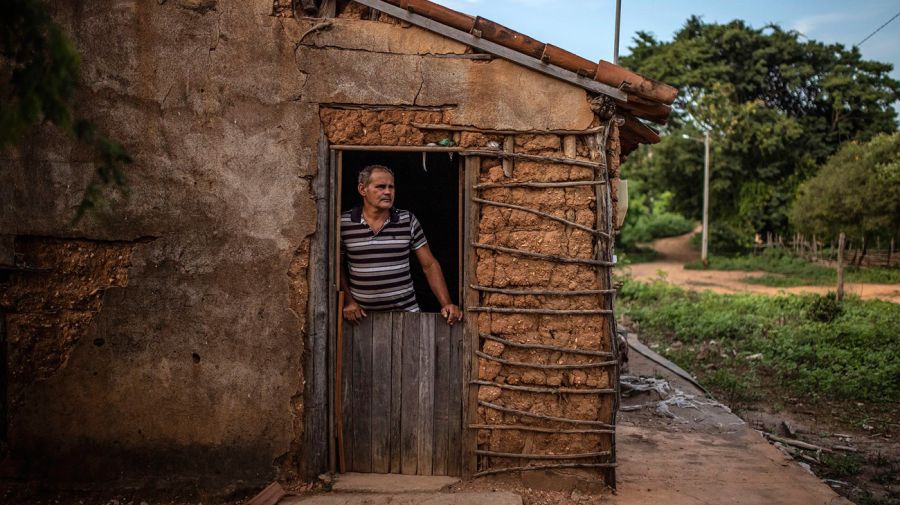 Inflation that’s above 11 percent, driven by rising fuel and food prices, is hurting the purchasing power of all families, but especially the most needy. A poll by the Datafolha institute released at the end of March found that one-in-four Brazilians said the amount of food available at home in recent months was less than they needed to feed the family.

“Food, electricity, cooking gas, all of this weighs much more on the life of a person who earns a minimum wage,” said Tania Bacelar, a partner at consultancy Ceplan based in the northeast city of Recife.

The Getúlio Vargas Foundation, an influential think tank, considers someone who earns less than 261 reais per month — US$56 — to be poor. By that measure, poverty steadily declined during Lula’s two terms, from 2003-2010, and in his successor Dilma Rousseff’s first term. It’s a drum he’s beating in the campaign.

“During the Workers’ Party government there was food on the table, formal jobs and a valued salary,” Lula said in a TV address on March 29. “Today, what we see is hunger, high prices and poverty on the streets.”

Luzia de Sousa, 71, agrees that life was better under Lula, and says he’s got her vote. Now retired, she receives a pension of 800 reais, but continues to clean houses for 30 reais a day to help her 14 children, numerous grandchildren and great-grandchildren in São José de Piranhas, in the northeast state of Paraíba.

“Lula was very good,” she said. Now though, she said, “the rich don’t even look at the poor.”

Bolsonaro is trying to address that deficit. In mid-March, he unveiled a 165-billion real  package of social spending aimed at the poor and middle class. He’s also exempted basic food items from import taxes, including roasted coffee, cheese, macaroni and sugar. Polls suggest his focus on aid for the poor is helping him to gnaw away at Lula’s lead. Lula had 40 percent backing in a Poder360 poll released April 13, down from 41 percent in March, while Bolsonaro’s support rose to 35 percent from 32 percent. That's the narrowest margin recorded by the pollster this year.

“Brazil is going through a difficult time,” the president said at a public event on March 29, citing the impact of inflation. He blamed it on the pandemic and the actions of state governors in applying restrictive measures to contain the spread of the virus.

More than 660,000 people have died of Covid-19 in Brazil, more than anywhere in the world except the United States. Bolsonaro promoted gatherings, ridiculed the use of face masks, criticised vaccines and defended quack cures. Polls show voters are critical of his handling of the pandemic, but they also express understanding for any president faced with a crisis of such magnitude.

“He is more likely to suffer the consequences of a loss of purchasing power and a high degree of unemployment and underemployment than the results of the pandemic,” said Graziella Testa, a professor at the School of Public Policy and Government at Getúlio Vargas Foundation in Brasilia.

In Barro, a city in the northeast state of Ceara, farmer Cicero Antonio de Oliveira finds everything expensive. The price of a gas cylinder jumped from 70 reais before the pandemic to 120 reais today. A kilo of meat that was 25 reais is now 40.

Oliveira, 55, says that he received 600 reais from the government during four months of the pandemic, but he’s not eligible for the current payout. He doesn’t yet know who he’s going to support at the election, but he’s clear he won’t vote for Bolsonaro. “I don’t think he’s any good,” he said.

Francisco Branco is less sure. Lula enjoys more support in his hometown of Penaforte in Ceara because “in his time it was better for me and for others,” said Branco, 61, who delivers barrels of water by horse-drawn cart. Now, though, with the cost of living soaring, he says he doesn’t know who to vote for.

The sertão in Brazil’s northeast is characterised by an arid landscape with twisted branches, cacti, and livestock whose skin stretches taut over pronounced bones, hinting at the hardships of rain just three months of the year.

Long known as an impoverished part of the country, there are signs of change. The constant sun and near year-round winds are a boon for clean energy, which has helped it become a net exporter of electricity.

Whereas water was once mostly supplied by trucks — traditionally in exchange for votes in small towns — a massive irrigation project to deploy the São Francisco River is now coming to fruition. First conceived in the 1870s, work on the 700 kilometres (435 miles) of canals began in 2007 under Lula and is being completed under Bolsonaro. A measure of its success is that both camps are sparring over who deserves credit for the near 15-billion reais infrastructure project that crosses four states and has the potential to bring water to 12 million people.

For Bacelar, a former secretary of planning and finance in Pernambuco state, the northeast should be seen as “part of the solution,” rather than the epitome of Brazil’s problems.

That’s little comfort to José Demontie de Souza, 61, who lived in São Paulo for 14 years before returning to Ceara. Now he sleeps in a hammock and only has electricity because he’s wired it up to the house next door. His refrigerator is broken and serves as a closet.

He has little truck with Bolsonaro, yet neither is he planning to vote for Lula. Soaring prices are causing “the worst crisis” he’s seen. Life, he said, “should be better for those of us of a certain age.”

Smiley and discreet: meet the sociologist who married Brazil's Lula 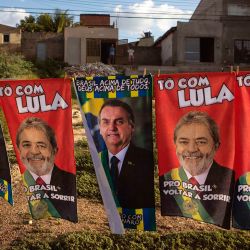 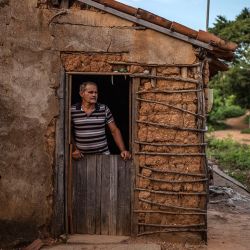