Argentine assets have tumbled so far, so fast that a few stout-hearted investors say it might be time to buy.

“Find me a high-yield sovereign country with an IMF programme paying so generously,” said Jean-Dominique Butikofer, the Atlanta-based head of emerging-market fixed income at Voya Investment Management, which oversees about US$205 billion.

“We can agree on the growth outlook, inflation running unexpectedly out of control, the debt dynamic after currency depreciation and worrying technicals. But at these levels, value has been created.”

He means numbers like these: 16.2 percent on dollar bonds maturing in three years or, better yet, 17.8 percent on bonds due in two. At a time when benchmark U.S. Treasuries yield 2.5 percent and bonds in more stable emerging-market peers like Chile just four percent, these are mouth-watering rates – especially from a nation that has a record US$56-billion loan from the International Monetary Fund, a narrowing fiscal deficit and even a trade surplus.

“I would be very reluctant to be completely out of Argentina here,” Paul McNamara, London-based investment director at GAM, which oversees about US$135 billion, said in an interview. “The currency is cheap, and unlike when this happened last year they have a huge external trade surplus.”

Of course, there are plenty of things to worry about. There’s Argentina’s history as a serial defaulter, for one. It stiffed bond investors for 15 years until finally reaching a settlement in 2016, months after market-friendly President Mauricio Macri took office. Its peso lost more than half its value last year and is on track to score a three-peat as the world’s worst-performing major currency in 2019.

And perhaps most importantly, there’s the threat that Macri might lose a re-election bid in October to his populist predecessor, Cristina Fernández de Kirchner. Concern about her return to power after polls showed her approval rating is now above Macri’s sparked this week’s rout.

With six months to go until the election, Macri’s popularity has taken a hit as the economy endures the second recession of his presidency with an inflation that’s above 50 percent, prompting the government to announce price controls that some analysts said smacked of panic.

But Jaime Duran Barba, the Ecuadorean adviser who has accompanied Macri throughout his political career, says investors exaggerated – focusing on polls now, he says, “is absurd.”

Emerging markets are all about volatility, said Jan Dehn, London-based head of research at Ashmore Group Plc, which oversees about US$85 billion.

“If you get afraid of market volatility you should not be in this business,” Dehn said. “Volatility is a permanent feature of life in EM, but we know that permanent losses are tiny in comparison. Volatility is, in almost all cases, absolutely your best friend.”

Besides, there’s a good chance inflation that high will decline from here, creating a window of opportunity as support for Macri rebounds, according to Whitney Baker, the founder of New York-based Totem Macro, which advises funds holding more than US$3 trillion.

Local investors are also seeking bargains. Argentina’s state pension fund on Thursday bought so-called local law bonds – dollar bonds sold only domestically – due in 2020 and 2024, according to people with direct knowledge of the matter. 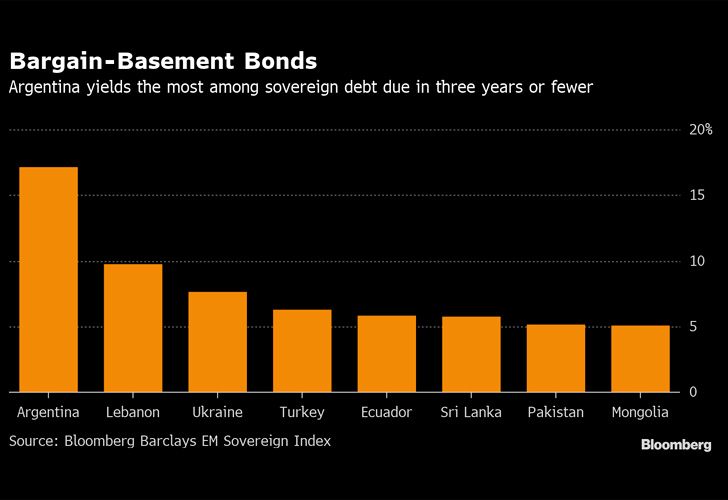 Argentina raises key interest rate to 69.5% in biggest hike since 2019

by by Justin Villamil and Ben Bartenstein, Bloomberg