Argentina’s bonds tumbled for a second day, sending an implied probability-of-default gauge over 60 percent and rattling the resolve of investors who want to believe President Mauricio Macri will fend off his populist foes and win re-election this year.

Argentina is once again feeling the pain of being considered one of the riskiest credits in emerging markets despite progress on a fiscal deficit and a record credit line from the International Monetary Fund (IMF) as a strengthening dollar saps demand for high-yielding assets. It comes at a tough time for Macri, who is struggling with sky-high inflation and a recession ahead of October elections which have eroded his public image in polls and led to concerns of a populist comeback by his predecessor Cristina Fernández de Kirchner.

The extra yield investors demand to own Argentine debt over US Treasuries has surged 160 basis points this week to 10.08 percentage points, surpassing the threshold where a credit is considered distressed. Dollar bonds lost 4.5 percent on Wednesday alone, bringing year-to-date returns to a three-percent loss against average gains of 6.6 percent for developing nation peers. The first bond maturing after the election, in April of 2021, has tumbled 9nine cents this week and now yields 20 percent.

In comments on Wednesday, Macri admitted that the market volatility is stemming from the political uncertainty.

“The world isn’t sure whether Argentines want to go back, and that makes the world very concerned – sovereign risk goes up, they take more defensive positions,” Macri said in a radio interview. “I think they’re wrong, they’re wrong. We Argentines aren’t going back” to the past. 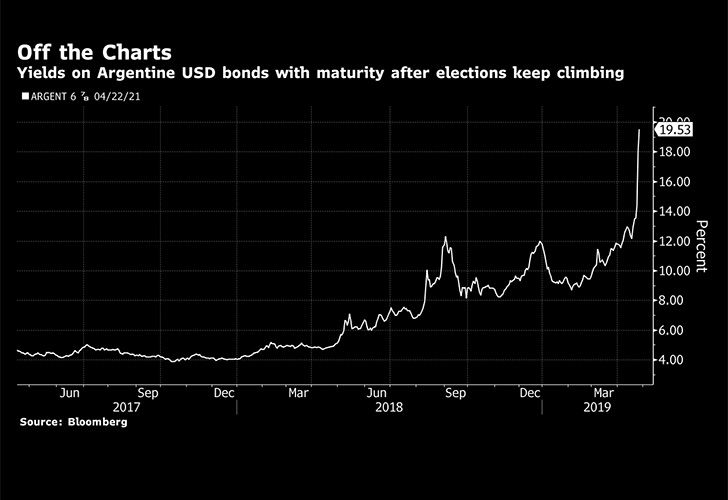 The implied probability of non-payment over the next five years has jumped to 61 percent, according to credit-default swap trading. Just a year ago, that reading was 23 percent. The peso, which was already the worst-performing currency in the world, slipped another four percent to 45.78 per dollar, a record low.

The market selloff is exacerbating the situation as rising borrowing costs and a weakening peso translate into higher inflation expectations, eroding support for Macri, JPMorgan analysts wrote in a note late Wednesday. That “negative feedback loop,” added to worse-than expected inflation, are the main drivers behind Argentina’s dire situation, they added.

“At the current juncture the market seems to be looking for a circuit breaker to that negative feedback loop,” the analysts said.

by by Carolina Millan and Patrick Gillespie, Bloomberg