Amid Argentina’s minefield of underperforming and already defaulted debt, notes from power producer MSU Energy have outshined them all.

The company’s US$600 million of overseas notes due in 2025 have almost doubled in price in just the past two months on bets that a sovereign restructuring is near. They’ve returned 16 percent since the start of the year, the best performance for Argentine corporates and among the top 10 in all emerging markets.

Investors flocked to the securities partly because of how beaten down they were, hoping for a windfall as Argentina’s economy normalises over coming years, according to Ezequiel Fernández, head of corporate fixed income at Balanz Capital Valores. While the notes are still deeply distressed at 67 cents on the dollar, the rally underscores optimism that the government and its creditors will come to terms on a US$65-billion debt restructuring soon.

“Once Argentina became risk-back-on because the sovereign was getting closer to a debt restructuring deal, MSU was poised to outperform,” Fernández said from Buenos Aires. 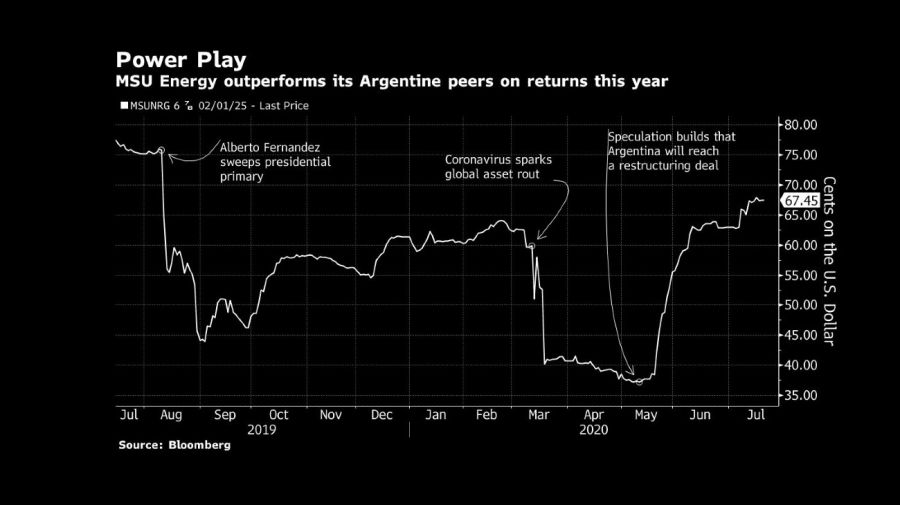 There are also more fundamental reasons for MSU’s gains this year. The company, which manages three natural gas-fuelled power plants for a total 750 megawatt output capacity, is almost finished upgrading its systems to so-called combined cycle, which improves power generation and efficiency.

It doesn’t need much more financing to complete the project, according to Fernández, but has access to local credit markets. MSU announced last week plans to issue as much as US$15 million of bonds in Argentina.

Investors are also taking comfort in MSU’s long-term power purchasing agreements, or PPAs, with the government that pay in dollars. While officials could seek to renegotiate those accords to square up the budget once the sovereign debt talks conclude, MSU’s contracts are newer than peers’, with less risk of being modified, according to Roger Horn, senior emerging-market strategist at SMBC Nikko Securities in New York.

“The sovereign debt renegotiation is an enormous amount of relief over the next two years, so the government will not be trying to find every peso to make the budget,” Horn said. “These are the last things that you mess with.”