Economy Minister Sergio Massa has managed to comply with the September objective of accumulating reserves in the agreement signed last March with the International Monetary Fund (IMF). There is relief over the record inflow of “soy dollars,” which surprised the economic team.

Nevertheless, the horizon for meeting the projections for the last quarter of the year looks more complicated although the economic team is betting on improving on the expectations for 2023 – a key year with elections but also a commitment to austerity and debt payment deadlines.

Cashing in on the soy harvest with a special 200-peso-per-dollar rate allowed the Central Bank to walk away with reserves of US$7.643 billion due to the sale of US$8.126 billion worth of the grain and its derivatives.

Yet “it was not a measure clearing us for extraordinary situations. Every dollar which came in must be guarded,” said a cautious Massa on the last day of September when announcing the results of the Programa de Fomento de Exportaciones while anticipating that “fiscally and prima facie we have complied” with the IMF.

The CEPA (Centro de Economía Política Argentina) think-tank highlighted that the public sector has through to August an accumulated deficit of 1.08668 trillion pesos, which represents 1.4 percent of a Gross Domestic Product estimated at 76 trillion pesos with half a trillion pesos for this year, according to the first IMF review of its agreement with Argentina.

“During the last month of the quarter the government could count on extra revenue from the export duties applied to cashing in soy at a 200-peso dollar (this could bring in almost 300 billion pesos), to which should be added a possible review of the nominal objective of the deficit, granting it an extra fiscal space of 120 billion more pesos. Although today’s numbers look complex, the government has sufficient tools to turn the situation around and meet the deficit objective without major inconveniences,” affirmed the report.

After meeting the reserves objective, Massa hopes to pocket around US$5 billion this month  between the remittances being discussed by the boards of directors of the IMF and the Inter-American Development Bank (IDB or BID, in its Spanish acronym).

Yet September’s good numbers will not be repeated in the next few months “cashing in the soy which would have been sold in October and November in advance,” Fundación Mediterránea - IERAL economist Juan Garzón assured Perfil.

Last month saw 13 million tons of soy cashed in “with only a minimal residue for the last three months of the year,” said Garzón, estimating that “in October there might be US$1.25 billion cashed in, with a similar sum or perhaps less in November.”

This scenario “would improve again in December due to the winter crop entering the market,” especially wheat, which would be contributing US$2-2.5 billion.

All this occurs when the balance of trade has accumulated three consecutive months of deficit through to August so far this year. The overall trade surplus stood at US$2.193 billion up to August, as against US$10.655 billion for the first seven months of 2021. 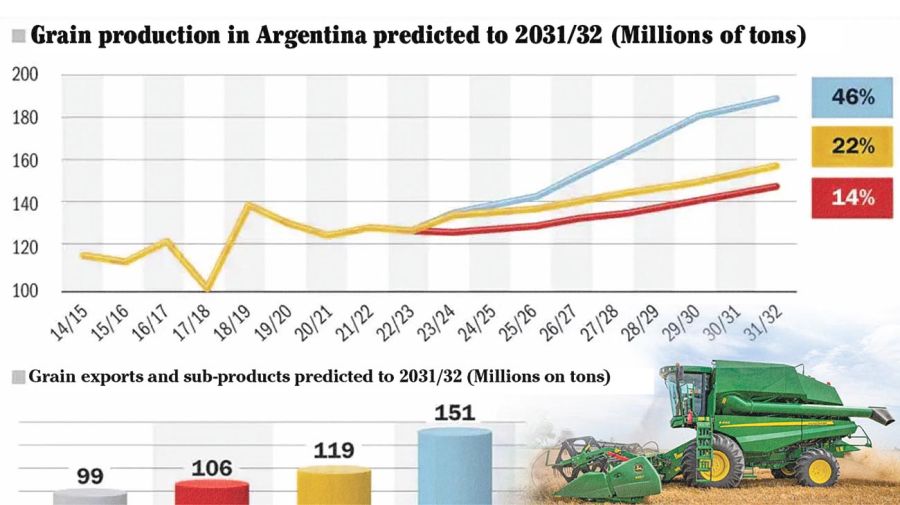 Economists and the opposition

In this context, former economy minister Hernán Lacunza remarked last week that “the government is trying to gain time” with the measures linked to the soy dollar.

“We’ve been on a downward slope not only under this government but for several decades. We’ve been failing in the basics, not only economic but also cultural and educational,” the minister, who served during the Mauricio Macri administration, explained to CNÑ Radio.

“When a government has to make decisions with the following Monday as its horizon, things can only go downhill as a result … The government is trying to gain time and dollars in the short term in order not to drown,” considered the former official.

In that framework he affirmed: “Public spending must be reduced although it does not come free nor can be done from one day to the next. It’s traumatic. It’s easy to increase spending and difficult to lower it.”

Nevertheless, “for that to be achieved, he would need to have and announce a consistent programme with political support, something lacking today,” said Llach in a report prepared for the Economics Department of Austral University.

Despite this, Llach has an optimistic outlook, assuring that “the global context is helping Argentina for now, fundamentally due to the (high) grain prices and it would be ditto for fuel if Vaca Muerta were operating at full blast.”

Despite the high prices of farming products, next year will not be the best for Argentine agriculture.

Farm exports are set to fall nine percent next harvest to US$40.9 billion. This dip will be due to the drought which cannot be compensated by agricultural investments, the Buenos Aires Grain Exchange estimates.

The grain production of the 2022-23 harvest will be 127.7 million tons with a dip of 1.6 percent as against the previous harvest while the area sown will be maintained at 34.5 million hectares.

Agustín Tejeda Rodríguez, the chief economist of the Grain Exchange, highlighted that the contribution of the main agricultural chains will be lower in 2023 due in part to the impact of the drought and that the only  variable to register growth will be the investments of farmers.

Emmanuel Álvarez Agis: ‘While we remain trapped in the grieta, lowering inflation will be quixotic’