As Argentina negotiates with creditors to restructure its debt following a ninth default, the government is struggling with another crisis: preventing precious dollars from flowing out of its embattled economy.

Strict currency controls, stalled debt payments, a nationwide lockdown – and still the greenbacks drain away. Foreign currency reserves dropped to a four-year low last week, totalling less than they did when the International Monetary Fund started a US$56-billion loan programme in 2018.

The strain is clear to see. After widening to a record 85.4 percent on May 14, the gap between the official and unofficial exchange rates still sits around 67 percent as investors accept huge losses to circumvent the currency controls and get out of pesos. Argentina may need to tighten capital controls still further, or let the official exchange rate weaken more quickly, risking higher inflation.

“The government is going to have to let the exchange rate slide a bit more,” said Alejo Costa, chief Argentina strategist at BTG Pactual in Buenos Aires. With net liquid reserves below US$6 billion, “the pressure from other emerging market currencies, especially the Brazilian real, increases pressure on the peso.”

The breach between the official and so-called blue-chip swaps, calculated from the difference between the prices of stocks and bonds that trade locally and abroad, is wider than the average of 40 percent during former President Cristina Fernández de Kirchner’s period in office between 2011 and 2015, which was notorious for capital controls. Ex-president Mauricio Macri lifted those controls, before a run on the currency forced him to reimpose them at the end of his term.

“Once the debt negotiations are through and the economy is somewhat normalised after the quarantine, the decline in the exchange rate will speed up,” said Marcos Buscaglia, founder of Buenos Aires-based Alberdi Partners.

The slump in reserves is remarkable given how hard it is to buy dollars.

Banks are prohibited from sending dividend payments abroad and Argentines can only purchase US$200 per month via official means since last October. More recently, officials have limited the amount local funds can hold in dollars, and restricted oil producers from trading on the foreign exchange market until December 31.

Argentina’s securities regulator, known as the CNV, set a five-day minimum for investors to wait before local assets can be sold in a foreign currency, according to a government decree Tuesday. 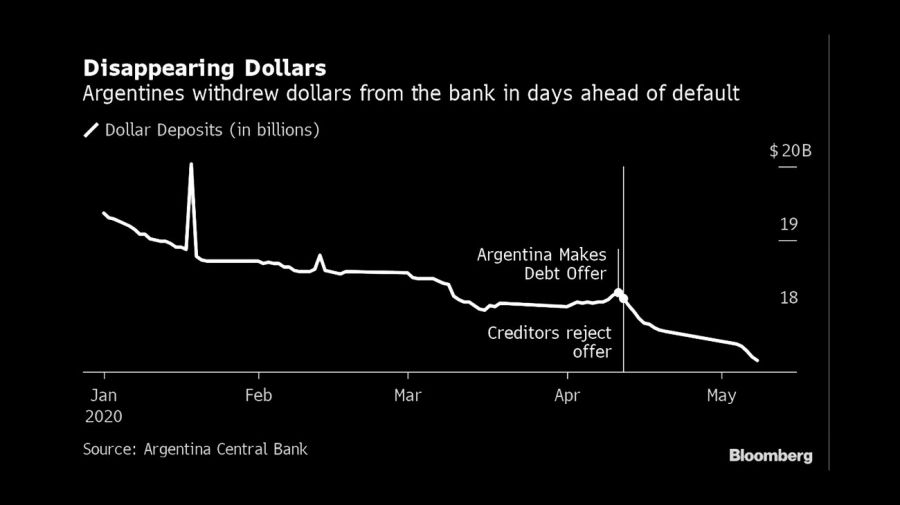 The government is also blocking some imports.

“This is worse than ever,” said Edgardo Guerrini, owner of local tire manufacturer Guerrini Neumaticos SA, who has 14 containers stranded in ports due to the brake on imports. “They asked us to cancel our import requests. And my colleagues have been told to import 30 percent less than in 2019.”

At the same time, the government has halted all dollar debt payments and is asking creditors for a three-year grace period before resuming them.

The peso has a track record of disappointing investors, posting the biggest declines in emerging markets in each of the past three years.

Not only do Argentines want dollars, they want to hold them somewhere perceived as safer than an Argentine bank. Memories linger of the 2001 “corralito” when the government restricted access to dollar deposits amid a similar financial crisis.

The value of greenback deposits declined for 30 straight business days through May 20, dropping by 6.3 percent, or US$1.16 billion. The Central Bank has also said it sold US$1.3 billion in the spot market to avoid the currency weakening during that period.

A spokesman for Argentina’s central bank said that the debt restructuring will improve Argentina’s financial climate and will discourage speculative trading.

“There are no signs that the exchange rate is overvalued, and there have not been any complaints by exporters,” he said.

While officials renegotiate the debt and the lockdown continues, farmers are meantime hoarding the soy harvest, waiting for a devaluation to receive more dollars for their stockpiled crops.

“They’re in dire straits, but until the debt negotiations are resolved, they’re sweeping the exchange rate gap under the rug,” said Mateo Reschini, an analyst at LBO in Rosario, Argentina.