Argentina is considering fiscal incentives to encourage companies to hire workers after unemployment spiked to the highest in at least 16 years amid the pandemic.

Labour Minister Claudio Moroni said he’s been working with the Production Ministry to lower some employer contributions. The incentives will probably be aimed at hard-hit industries in Argentina’s least-favoured provinces, he said.

“The idea is that we’ll assist companies so that they hire young people and we help to train them,” he said in a video interview with Bloomberg, declining to specify the type of benefit or sectors that would receive them.

Unemployment in Argentina rose to 13 percent in the second quarter, the highest level since 2004 – with more than two million Argentines having fallen out of the labor force entirely. Work suspensions have increased substantially too.

The fast deterioration of the labor market comes in spite of the government’s initiatives to offset the economic impact of the pandemic. Argentina has banned firing workers and also forced companies to pay double the ordinary amount of severance if they discontinue operations in the country. On top of that, the government is paying half of private sector workers’ salaries to support firms that have lost revenue during the crisis.

The administration of President Alberto Fernández also recently rolled out an ambitious initiative to provide some three million workers with training customised to employers’ needs. 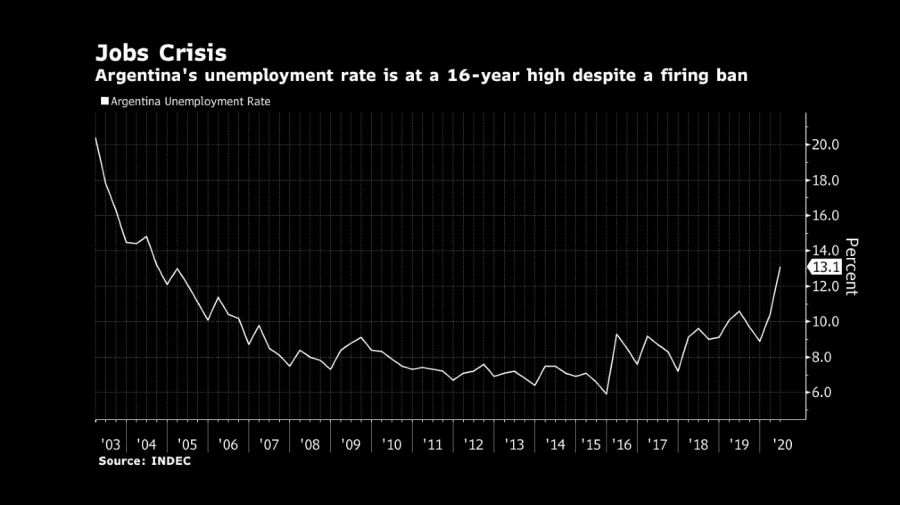 During the interview, Moroni pushed back against the notion that Argentina labour market’s design requires a major overhaul, saying he wouldn’t change anything about the government’s approach to protect jobs. Business leaders point to powerful labour unions and extensive employment litigation, among others factors, as a reason why some multinational firms decided to leave the country this year.

“We do everything possible when firms let us know about these things, and we try so that the companies don’t leave, but companies make decisions,” Moroni said. “Attributing Argentina’s economic problems to the labour market’s design is excessive and outlandish.”

The government is aiming for an economic recovery to spur job growth and is not planning any structural reform, such as an amnesty programme to bring more workers into the formal, tax-paying job market, the minister said.

Although the severance doubling and firing ban are currently set to expire this year, Moroni also said the measures are dependent on how the Covid-19 pandemic plays out.

“They’re extraordinary measures tied to the pandemic and when everything normalises, we’ll return to the normal regulations,” he said.