Argentina’s cash-strapped government says it can find US$5.1 billion to give to natural gas drillers in a bid to resuscitate the country’s Vaca Muerta shale patch and prevent a jump in imports of the fuel.

The four-year subsidy programme that was announced last week will cost Argentina more than US$1 billion annually, including US$1.5 billion in 2021, at a time when the government is struggling to recover investor confidence following a debt restructuring and hasn’t posted a monthly fiscal surplus in a year.

Drillers may be wary after previous subsidy programmes saw producers encounter difficulties in receiving payments and confusion over the rules. Energy Secretary Darío Martínez said spending on subsidies is still better than the alternative of buying cargoes of liquefied natural gas, even though LNG is cheap at the moment.

“We’ve done the analysis and we really benefit from doing this,” Martínez told reporters in Buenos Aires on Wednesday. The government incorporated the LNG slump into its calculations and estimates it will still save US$2.6 billion from 2021 to 2024 by subsidising drillers instead of importing fuel.

Vaca Muerta in Patagonia is the world’s second-biggest shale gas formation. Production there was floundering even before Covid-19 roiled markets because of supply gluts and pipeline restrictions. Soaring gas output from Tecpetrol SA, a unit of billionaire Paolo Rocca’s Techint empire, came just as the economy began to shrink, slashing prices and putting the breaks on drilling.

The latest subsidy programme hopes to lure US$5 billion of investments and a dozen drill rigs, Martinez said. Companies that compete in an auction next month for three-year supply contracts can receive a maximum of US$3.70 per million British thermal units, with the government covering the difference between the winning bids and prices currently paid by consumers of US$2.30. Other natural gas basins, not just Vaca Muerta, are eligible.

State-run YPF SA will probably be one of the biggest beneficiaries, and the government has also held talks with Pan American Energy LLC, Total SA, Cia General de Combustibles SA and Pampa Energía SA, Martínez said. It is also in discussions with Tecpetrol since it’s unclear whether the company will be able to take part while it pursues a legal battle to receive a better rate under a previous program. Tecpetrol says it is waiting for full details of the new program to be published to know where it stands. 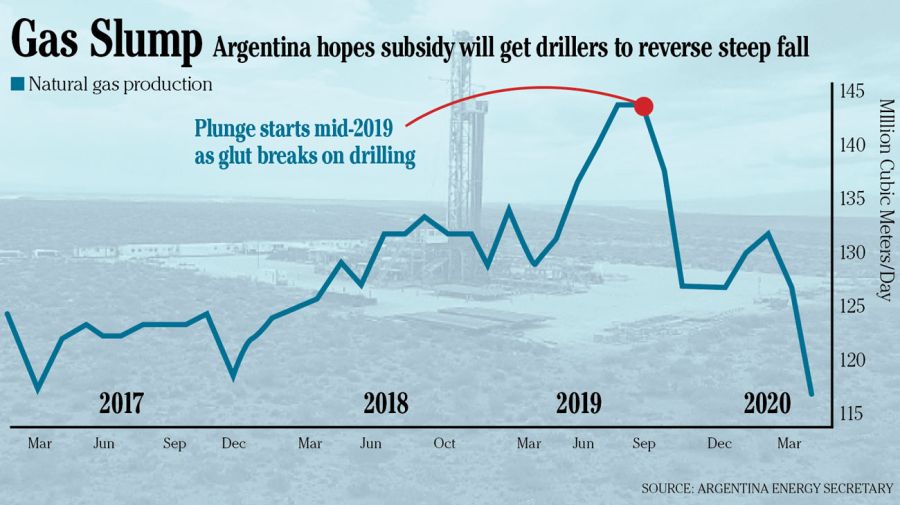 Other highlights from the interview:

– Martínez didn’t rule out bringing back a second re-gasification tanker to supply Argentina in the winter of 2021. A decision will depend on the auction next month for subsidised production

– Argentina needs to know for how long, and at what price, Brazil will commit to buying gas before progressing with a plan to build a pipeline to supply its neighbour

– A bill to spur oil investments is still being drafted. Martínez says drillers with overseas debt should be able to freely access dollars to service those borrowings

– The Energy Secretariat has given companies that won renewable energy projects in government tenders but haven’t started building them until next month to explain why. The projects will be reassigned if the companies can’t commit to them