Investors pummelled Argentina’s debt market on Wednesday as a looming presidential election stoked concern the country is heading for its third default in less than two decades.

Five-year credit default swaps were quoted at 1,117 basis points, according to prices compiled by Intercontinental Exchange, Inc. That puts the probability of a default over that period at more than 50 percent, up from 22.7 percent just one year ago, Bloomberg data indicated.

Markets are retrenching as support for President Mauricio Macri tumbles ahead of October’s election, with the economy enduring the second recession of his presidency. That has opened the door to the possible return of former president Cristina Fernández de Kirchner, whose policies of tax and spend some blame for the subsequent economic crisis. Inflation of almost 55 percent has also spooked markets.

Regional governments express unease at rolling back of facemask rules

"It clearly seems the election is slipping away from Macri," said Alberto Ramos, head of Latin America research at Goldman Sachs. "There’s increasingly less guarantee that policy continuity will be maintained after the election, and that makes markets nervous."

An Economy Ministry spokesperson did not respond to a request for comment.

Last year’s unprecedented US$56-billion credit line from the International Monetary Fund (IMF) and US$76.7 billion of reserves at the Central Bank have failed to reassure investors that the government can ride out the current recession. 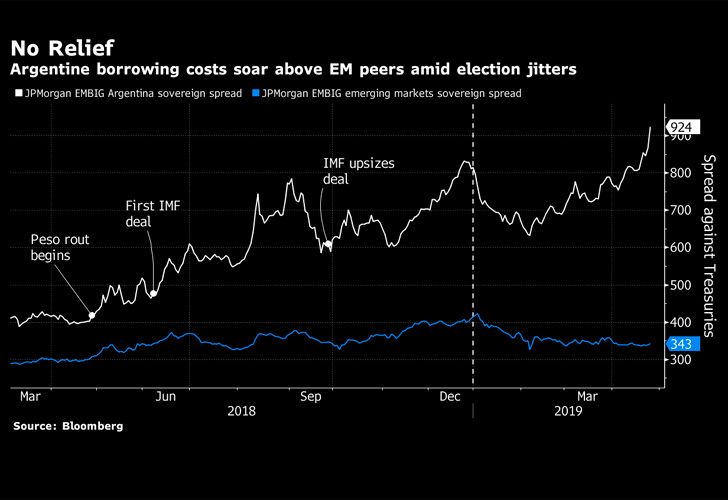 Some analysts attributed Wednesday’s sell-off to comments made by Juan Germano, head of Argentine polling firm Isonomia. In a radio interview Wednesday, Germano said a recent poll Isonomia conducted showed Fernández de Kirchner winning in a potential run-off vote against Macri. Germano, who does polling for the government and private clients, cautioned that it was early to draw conclusions on the data.

Turn the page on Covid-19? Not so fast, say experts

Macri’s approval rating stabilised in April, while a run-off vote against Fernández de Kirchner is too close to call, according to a separate poll published Monday by Buenos Aires-based consulting firm Elypsis. While only 28 percent have a positive image of Macri, Fernández de Kirchner is seen positively by 44 percent of Argentines, the survey showed.

The former president is on the verge of releasing an autobiographical book this Friday called Sinceramente, further raising her profile ahead of the vote.

It’s "all about inflation and Macri’s prospects in the fall,” Greg Lesko, a money manager at Deltec Asset Management in New York, said in relation to Wednesday’s decline in stocks. “Inflation is staying stubbornly high, which hurts Macri’s chances. The election is seen as a binary."

As the political tension rises, Argentina’s dollar debt has fallen 5.6 percent on average in April, compared with a 0.2 percent gain for its emerging market counterparts, based on JPMorgan data. The country’s century bond due in 2117 fell 2.3 cents today to a record low, while the 2021 dollar bond, the first to mature after October’s election, is yielding a record high of 17.41 percent.

“There’s a big upside or downside depending on” October’s results, Lesko said.

Unemployment in Argentina dropped to 9.6% in second quarter

Details of the new Covid restrictions introduced by Argentina's government

by by Pablo González, Bloomberg