Argentina’s airline passengers have been enjoying their first taste of the global boom in discount airlines. Now the shift to greater competition is under threat from a powerful potential foe: the country’s next leader.

Fernández’s resounding victory – fuelled by voters’ rejection of austerity measures adopted as part of a US$56-billion loan from the International Monetary Fund – endangers an aviation opening that has enabled half a million passengers to fly for the first time. The biggest discounter, Flybondi, drew unwanted attention last week after its former chief executive officer described Peronism as a “cancer” in leaked personal messages.

“A Fernández administration can make life much harder for new entrants and favour Aerolíneas Argentinas,” said Savanthi Syth, airlines analyst at Raymond James. “There’s a risk that the somewhat supportive environment, through the removal of barriers to entry/market-based competition, would be reversed with a change of the administration.”

Of Macri’s many grand plans, his airline opening was one of the few that were successfully executed.

He allowed competition on more routes and scrapped price floors that propped up airfares. Alongside airport operator Corporación América, the government invested US$2.2 billion since 2016 in infrastructure works. A former military airport near Buenos Aires, El Palomar, was adapted for commercial flights.

That positioned Argentina to join a regional boom in budget airlines in countries from Mexico to Brazil.

“What’s interesting about Latin America is that low-cost carriers have really been the engine of growth, especially in Brazil but also in other large markets like Mexico and Colombia,” said Darren Hulst, Boeing Co.’s managing director for market analysis & sales support.

Low-cost operators control about 35 percent of the Latin American airline market, he said.

Companies such as Flybondi, Norwegian Air Shuttle ASA and Chile’s JetSmart flocked to Argentina, which according to Syth has Latin America’s fewest trips per person after Venezuela. Argentina had 14.2 million domestic passengers in 2018, up 13 percent from the previous year, and low-cost carriers now fly 40 routes. The discounters have carried more than 3.4 million passengers since early 2018, according to the Transport Ministry.

“We continue doing what we know how to do: being efficient and demonstrating that our model has no political party,” Mauricio Sana, Flybondi’s chief commercial officer, said in comments before last week’s dust-up involving the company’s former boss.

The ex-CEO, Julian Cook, resigned from Flybondi’s board last week after his harsh words for the next president’s party. 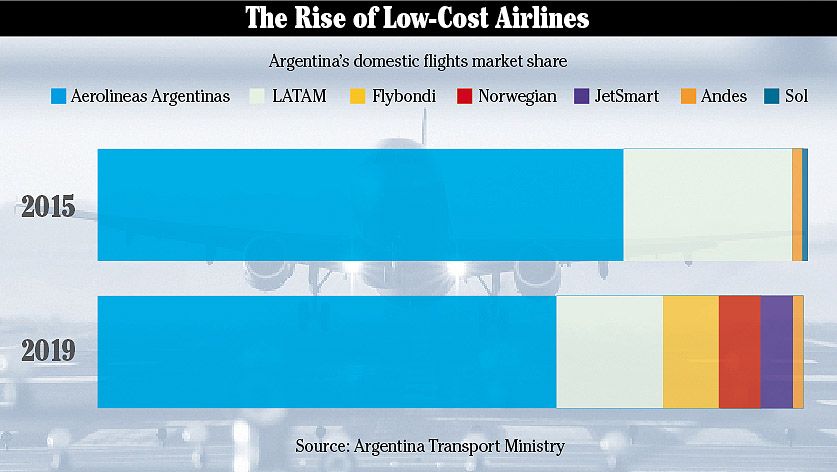 For discounters, the going hasn’t always been easy in a country with inflation above 50 percent and an economy headed for its second straight annual contraction this year and a third expected in 2020.

Perhaps the toughest challenge has been the plunging peso, which lost half its value last year and has already dropped 37 percent in 2019 – with most of this year’s decline coming after the August PASO primary vote that foreshadowed Fernández’s election victory.

The volatility is bad news for an industry where the purchasing power is in local currency but as many as 60 percent of costs are in dollars.

“The rising inflation has imposed some challenges on the ability for the companies to both grow and sustain the operation,” said Ole Christian Melhus, head of Norwegian Air Argentina, which operates domestic routes as well as a flight to London. “Growth plans have been reduced.”

Flybondi has the most routes of the discounters and an eightpercent domestic market share. Since changes in the airline policy, the piece of the pie controlled by Aerolíneas Argentinas has fallen to 65 percent so far this year from 74 percent in 2015, according to the Transport Ministry. But the flagship airline flew three percent more passengers in the first eight months of 2019 compared with the same period a year earlier as the number of flyers expanded.

Fernández, who takes office December 10 after winning the October 27 election, campaigned on promises to boost salaries and stoke consumer spending. His running-mate, former president Cristina Fernández de Kirchner, took a protectionist approach to the economy during her two terms in office.

In the airline industry, the incoming president has complained that the rise of discounters has put more pressure on Aerolíneas.

“It allows low-costs to go to the profitable destinations while Aerolíneas must take care of the unprofitable ones,” he said in a radio interview during the campaign. “I’ll review it.”

The state-controlled company will require more than US$300 million in subsidies this year, up from US$197 million in 2018, because of the latest currency volatility, said Guillermo Dietrich, Macri’s transport minister.

Another drag on its finances comes from the strength of its labour unions, which require more pilots and mechanics per plane than other companies operating in the country, he said.

“We’ve worked hard to cut costs,” he said. “To curb the kilos on the aircraft, we analysed everything from digitising manuals to the weight of coffee stir sticks.”

Many of the low-cost carriers are diversifying their risk amid the turbulence. Four of them have announced this year that they are opening routes to Brazil, the largest market in the region.

Ultimately, though, their fate depends on what happens in Argentina.

“Nothing is clear for now,” Flybondi’s Sana said.

One million doses of Sputnik V and 18 million euros