Argentina must repay US$5 billion by the end of 2019. It doesn’t have much to work with.

While the country’s foreign reserves total a still somewhat robust US$43 billion, that figure shrinks markedly once untouchable assets such as dollar deposits of everyday Argentines and a credit line from China are stripped out. Analysts surveyed by Bloomberg News estimate that the amount that policy makers can actually freely spend is no more than US$12.5 billion. One of the analysts, Siobhan Morden of Amherst Pierpont Securities, puts the figure at as little as US$6.5 billion.

Bond investors are largely prepared for that moment, having already driven down the price of some of the government’s foreign bonds to less than 40 cents on the dollar. But the dire foreign reserves situation indicates the default could come sooner than some expect, perhaps shortly after president-elect Alberto Fernández takes office in December. 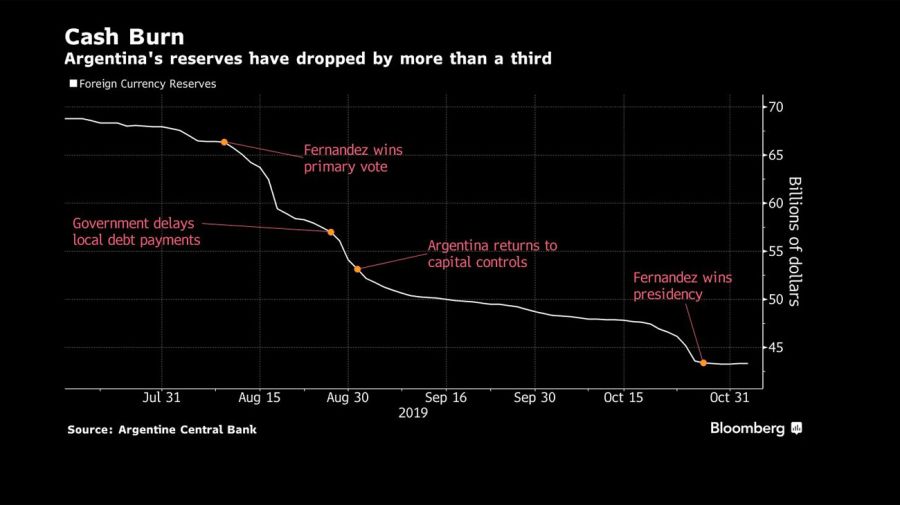 Morden anticipates Argentina will manage to muddle through the end of 2019, though that will come thanks to capital controls that were first imposed after the August presidential primary victory by Fernández and his running-mate, former president Cristina Fernández de Kirchner. Total reserves have dwindled by about a third, from US$66 billion, since that vote sent the Frente de Todos leader, a populist with broad promises to improve life for Argentines, on a path to the presidency. The Central Bank has managed to rebuild reserves by more than US$1 billion by imposing even tighter controls on dollar purchases after Fernández’s election in October.

Argentina’s Central Bank doesn’t publish official data on net reserves, so estimates on how much it has left vary.

Net reserves may be closer to US$10 billion including Treasury deposits at the central bank and liquid reserves, according to Ezequiel Zambaglione, head of strategy at Balanz Capital Valores in Buenos Aires. Bank of America strategist Sebastian Rondeau in New York puts the figure as high as US$12.5 billion, while Martin Castellano at Washington’s Institute of International Finance estimates the figure at US$11.2 billion.

The Central Bank declined to comment on net reserves.

Interest payments on foreign-currency debt total US$3.5 billion through the end of 2019. In addition, Argentina owes another US$1.5 billion of peso debt. Finance Minister Hernán Lacunza told El Cronista that the nation would meet its financing needs until year-end by rolling over public-sector debt and said Argentina won’t simply go “out of control” printing pesos.

All told, the nation has US$115.8 billion in outstanding debt to institutional and retail investors, according to the Economy Ministry. While Argentina could conceivably dip into parts of its gross reserves to stay current on payments, doing so would further weaken investor sentiment and rattle existing or potential lenders. The International Monetary Fund, which arranged a record US$56-billion bailout in June 2018, targeted at least US$10.5 billion in net reserves by the end of November and US$9.8 billion at the year’s end.

It’s little surprise, then, that credit-default swaps imply a 97 percent probability that Argentina will suspend payments during the next five years. The ministry declined to comment. 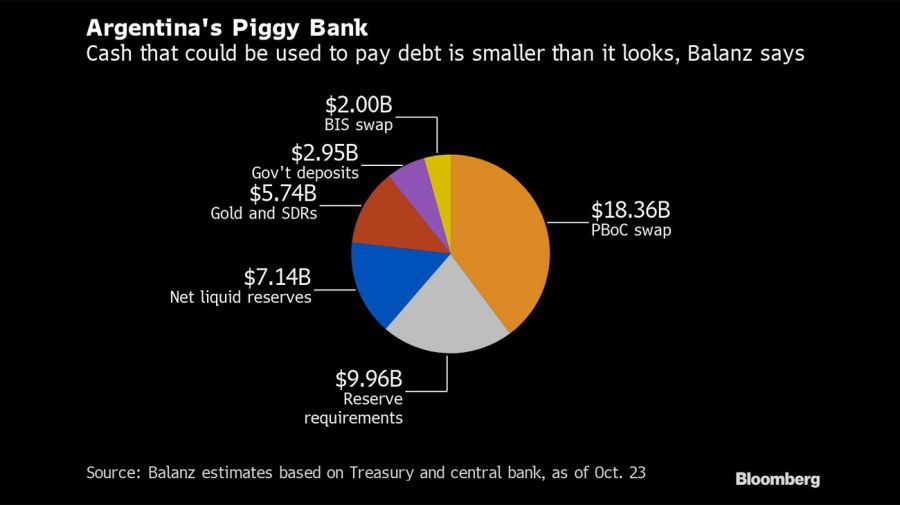 “Argentina’s market access is closed, and it is highly unlikely that it will be able to pay most, if any, of these interest payments given its current situation,” Citigroup Inc. emerging-market strategist Donato Guarino in New York wrote in a note, referring to the total debt load. “Argentina is running out of cash, hence the need to restructure.”

Here are Argentina’s key debt obligations for the remainder of 2019, according to data compiled by Bloomberg:

Exchange rate calculations as of close on November 6, 2019