One of them worked alongside Clint Eastwood, others acted in the remake of sci-fi classic Planet of the Apes, while yet another was the darling favourite of Michael Jackson.

They are the 53 chimpanzees and orangutans who live in a unique sanctuary in central Florida.

All of these great apes were raised by humans and lack the basic survival skills to ever live in the wild. They do not know how to gather food, and the mothers would be incapable of caring for their offspring.

For that reason, they had no other place to go when Hollywood or scientific research labs had no more use for them, or when they grew too big and powerful for their celebrity owners to continue caring for them. The lucky ones make the final journey to this oasis, officially known as the Center for Great Apes (CGA) in Florida, in the southeastern US.

It is the only accredited orangutan sanctuary in the western hemisphere and one of only nine chimp sanctuaries in North America.

One of the more recent arrivals is 33-year-old orangutan Sandra, who joined the CGA community last November, after a court in Argentina declared her a "non-human person" with the right to liberty from the former Buenos Aires City Zoo (later renamed Ecoparque) where she had been kept. After that historic legal finding, she was sent here to get over her depression.

Now she is the spoiled girl of Florida's most exclusive retirement community. "She plays a lot. She's doing really well," said Patti Ragan, who founded the centre.

"She is meeting several orangutans right now. The one that I think she's most interested in is a male named Jethro," she said. "Pretty soon we're going to open the door so they can be in the same space. So we hope that goes well."

Another resident is Popi, a 48-year-old orangutan who was eight when she played the girlfriend of Clint Eastwood's simian sidekick in the movie Every Which Way but Loose and then again in the sequel Any Which Way You Can.

She wounded up acting in Las Vegas until hidden camera footage showed she was being mistreated by her trainer.

Then there are the 23-year-old twin chimpanzees Jacob and Jonah, who appeared in the 2001 Tim Burton movie Planet of the Apes, as well as Bubbles, once the adored baby chimp of Michael Jackson and now a hulking 37-year-old, the alpha male in his group.

Furthermore, there is Tango, an orangutan who for years served as the face of the orange beverage Tang.

"We have a lot of former entertainment great apes here," Ragan told AFP.

Not all of them are former Hollywood stars. Others were in circuses, research laboratories or were sold as exotic pets when they were still babies. Some wound up living in cramped cages or garages because they became more difficult to control when they grew up.

The CGA is located on 40 hectares (98 acres) of wooded land near Wauchula, surrounded by central Florida's orange groves.

The entrance to the sanctuary does not call attention to itself, with well-trodden dirt tracks snaking between the trees and connected by raised corridors along which the apes can move about.

In the clearings are the enclosures, like giant bird cages, full of plants, toys and things for the apes to climb on.

It is one of the few places in Florida to have been opened in secrecy, rather than with the usual fanfare of theme parks and tourist attractions. It is neither a zoo nor a park, does not accept visitors and does not promote itself.

Only donors can visit, and then only by invitation, and just a couple of times each year to get to know the apes. Even then, they are banned from posting pictures on social media.

"Their [the apes'] well-being is priority," said Ragan.

As a result, very few people even know the place exists, said Jeff Thomas, 76, who together with his wife Terrie were among a group of donors visiting the centre during a recent auction of "ape art".

On tables arranged among the trees, the organisers had displayed paintings created by the chimps and orangutans, abstract and vibrant with colour. On a paper to one side, the visitors write down their bids for the artwork.

"I'm very proud to know that this is a wonderful place for them," said Terrie Thomas, 60, her voice trembling slightly. "It makes me really emotional to talk about it because I really, truly love these animals. I think they're amazing."

The description of one painting by Jacob explains that the chimp "especially enjoys painting, and he usually likes to taste each bright color before he puts it on his canvas."

Supporting each animal costs around US$23,000 per year, and together with other running costs, the sanctuary needs US$1.8 million every year. It is financed solely by voluntary donations.

The foundation sprang up almost by chance. Patti Ragan was living in Miami and doing volunteer work at the city zoo when she was asked to look after a baby orangutan, due to experience she had gained in Borneo.

A year later, a baby chimp was added to her care, and in 1993, Ragan registered her sanctuary as a not-for-profit organisation.

And the baby orangutan she was originally asked to look after is still with her, named Pongo, and now 29 years old. 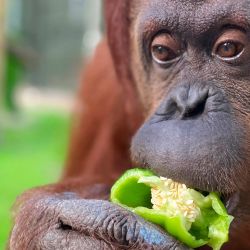 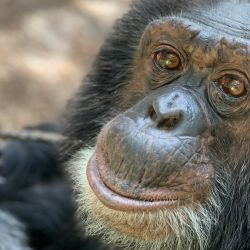 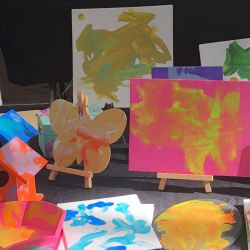