After reaching the top of the Billboard Argentina Hot 100 in December 2020 with his song ‘L-Gante Rkt,’ the L-Gante phenomenon has only continued to rise this year, exploding out into the mainstream.

Today, the creator of ‘cumbia 420’ is an artist who fills stadiums like Luna Park, which he played for the first time on November 20. The 'trapero' performed his show dressed in customised Baller Brand t-shirts, like the one that can be seen on his Instagram page. It bears the legend "Cumbia 420 K-Loke” and it costs 9,044 pesos. According to media reports, the artist's one-off performances at nightclubs or private events are worth 1.5 million pesos, a figure that rises to two million if those attending number between 3,000 and 5,000. Royalties Calculator is a website that calculates how many listeners an artist has per month on streaming sites and what their estimated earnings are, based on the price per play. According to this site, L-Gante’s 8.9 million monthly listeners on Spotify gives him estimated earnings of more than US$28,300 per month and more than US$339,600 per year.

L-Gante is an artist who tunes in very effectively to the needs of his audience, but he is also much more than that. The boy from General Rodríguez, Greater Buenos Aires, is strategic in his movements when it comes to achieving greater impact, new business deals and agreements with important companies.

To cite just two cases as an example, in September of this year the singer gave a show in Mendoza – and in the process, he unveiled his own wine. Produced with the company Biri Biri Wines, ‘Tinty 420’ is a Malbec wine made with grapes from the Uco Valley. Launching at a price of 780 pesos, so far it is only sold via email ([email protected]). L-Gante says that the idea came to him after talking to his managers, who contacted the wine broker Marina Mendieta for advice. With renowned winemaker Bernardo Bossi Bonilla onboard – the man responsible, among other things, for wines produced by former footballer Nicolás Burdisso – the effort got underway. Damián Campins, a managing partner of Biri Biri Wines, said: "The project took between six and seven months. We released a batch of 10,000 bottles that sold out and we will probably release 10,000 more next year. As soon as they announced it, it got out of hand, even though it is not a wine for mass consumption, due to the price."

Another example occurred back in October, when L-Gante starred in an advertising campaign for Mercado Pago, Mercado Libre's virtual payment wallet. Sticking to the brand, he appeared rapping with advice about what to do with personal finances.  “L-Gante te lo explica, como el ‘ABC,’ pero con tu guita,” ("L-Gante explains it to you, like the ‘ABC,’ but with your own money") he rapped to viewers. "The objective of the campaign with urban artists is to continue promoting financial inclusion and the democratisation of access to financial tools in the region that allow you to manage your money in a simple way," said Mercado Libre, the firm that recently ranked top in a list of the most valuable companies in Latin America. In addition, the company stated that they liked the idea of using L-Gante for the campaign because his "urban" music reaches young people and allows the company "to accompany them and explain that through simple solutions, such as those offered by Mercado Pago, you can manage money without it being boring or difficult."

Beyond his personality and popular appeal, it is clear that L-Gante is part of a wider phenomenon of young artists who take cultivate urban rhythms like reggaeton, trap or rap and who, in turn, are empowered by the advances of technology, which means that it is no longer necessary to be discovered by a record label. Today,  you can start a musical career just through Spotify or a Youtube channel.

"It is the strongest generational change of the last decades. In Argentine rock, we haven't had young celebrities since Soda Stereo or Spinetta. From the 1990s onwards almost all the famous rockers we had were older than 35. This is a time of young people for young people and where they have broken the industry, they come from other places and they are doing it on their own. It has all the characteristics of a movement – they have their clothes, their aesthetics, their sports, their art, which is graffiti, their competitions, which are freestyle. They collaborate and nurture each other," says music producer Juan Florido.

Luna Park was not L-Gante's only quantum leap during November. That same month the singer collaborated with actress and singer Tini Stoessel on the song ‘Bar,’ which at the time of writing has already racked up 59,210,778 views and 901,225 likes on YouTube. According to Spotify's latest ranking, L-Gante and Tini were two of the most listened to artists in Argentina in 2021. ‘Bar’ currently tops the list of most listened to tracks.

Agustín Guevara previously worked as Spotify's manager for the Southern Cone. Today he runs EskaleraReal, a network that provides services for music artists. According to the expert, L-Gante’s strategy is to appeal to the masses and everything that people consume massively. "He does songs with Tini, he does Mercado Pago; he was with Mona Giménez in Córdoba; he covered 'Mano de Dios' in homage to Maradona and Rodrigo – his strategy is to be as popular as possible. He is an artist who develops a musical genre with its own development, such as ‘cumbia 420’  – something similar to what happens in Brazil with funk, which was born in the favelas," said Guevara.

The strategy of working with Tini, a star of international renown, seems like a smart move on the part of the rapper. In 2020, Spotify revealed the list of the artists who have grown their listener base the most over the last seven years, when the company landed in the country: Tini tops the list. She has 16 million followers on her Instagram, while L-Gante has four million. On Spotify, Tini has an audience of 14 million users versus eight million for L-Gante.

"There are artists that many people didn't have on their radar, such as L-Gante. Although he had already been making music, most people got to know him when he recorded the track with Bizarrap. It helps Tini to stay current and not close herself off to her own audience, and L-Gante to make himself known to a larger audience," offers Guevara, who also pointed out that there are the limitations of this type of strategy. "Because of the type of lyrics and music she makes, L-Gante doesn't have the easy access to a target audience that Tini has had since her 'Violetta' days. I think these strategies work as long as the artists share the same target. If L-Gante were to go more pop, which I don't think he will, he might win over Tini's audience. Tini's most loyal audience has a 'cleaner' profile than what L-Gante proposes. His strategy is to go popular," he concludes.

Beyond the commercial agreement and the fight for fans, for Juan Florido the collaboration between the two singers has a clear winner: their fans. "They are both highly valued celebrities. Music wins and the public wins, who are seeing their two superheroes as if it were the Marvel multiverse," he says.

In addition to his business savvy reputation, L-Gante is always seen to be in total control of his media impact. Whether it's telling an interviewer about his refusal to fix his teeth or raising the issue of the legalisation of marijuana consumption at Juana Viale's dinner table, the rapper knows the concentric circles that his public actions generate (and whether they are favourable to him or not). The singer's latest coup was his appearance on Showmatch, a programme that, despite its current course, one perfectly embodied popular appeal for a long time. There, L-Gante was invited to participate as the fifth judge, and he gave himself the pleasure of singing a song live, accompanied behind the camera by his mother, his wife Tamara and his newborn daughter, Jamaica: a family side of the idol that reinforces his closeness to the public.

It’s not known who will provide or who will be the next hit from Argentina's new urban-class music phenomenon. But judging by all that L-Gante has achieved in such a short time, one would think that ‘cumbia 420’ has only just begun. 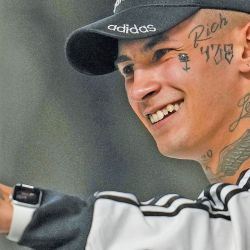 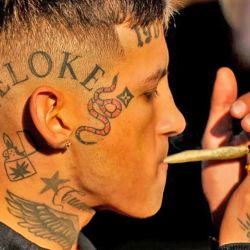 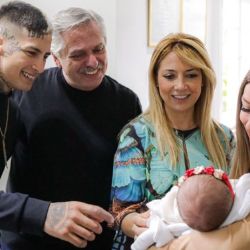