In the late 1920s, Robert Woods Bliss walked into the mansion of Argentine diplomat Ernesto Bosch. He was immediately taken aback by its beauty. The sweeping columns, the captivating grandeur of its Fench classical design, it gardens whose sophisticated geometry was reminiscent of Versailles. He knew he had to have it.

He made repeated propositions to Bosch who always refused him; it was unimaginable that he would willingly part ways with his enormous masterpiece of a home, one that he himself had commissioned and had been living in for just over 10 years. But Bliss, the United States ambassador to Buenos Aires who had first stepped foot into the palace for a reception in his honour, was in love with the majestic Palermo residence. He would not relent.

“Three million dollars,” was the response. It was a sum Bosch considered inconceivable to actually gather.

Bliss showed up the next day with the money.

Three months later, the stock market crashed and the worst economic crisis in US history began. If Bliss and the US State Department had waited any longer, the palace would certainly have remained in the hands of the Bosch family – and it would not have become the residence of the US ambassador in Argentina, as it is today.

Last Saturday and Sunday, the Palacio Bosch in Palermo was opened up to the Argentine public. Unlike Ambassador Bliss – who had the treasure of the United States government to help him fulfil his dream of acquiring the residence – none of the visitors made attempts to purchase the mansion this time around.

Yet they were given an insider look at the interior of the palace in person and heard tales about its history – a privilege hardly offered to anyone short of foreign dignitaries.

The tour was organised as a part of Open Embassies programme, a US government scheme which takes place every year and features different embassies from around the world such as those in the UK, Brazil, Poland and France.

The Palacio Bosch was opened to the public for the first time through the programme in 2016 and last weekend marked the third time that tour groups were given a chance to see its interior. Between Saturday and Sunday, over 500 people received 30-minute tours after preregistering online.

As visitors were ushered into the house they took seats in the lobby to receive a brief history of the house. They learned that the home was originally the residence of Ernesto Bosch, a card-carrying member of the early 20th century porteño aristocracy. Bosch commissioned French architect Rene Sargent to build the mansion in the French neoclassical style after returning home from diplomatic posts abroad to serve as foreign minister. It is often considered Sargent’s finest work.

Just as the tour guide was diving into the work of André Carlhian, who did the interior design on the house and the rug later added to the lobby featuring elements of the US and Argentine flags, a voice popped up from the back of the room.

“Who lives upstairs?” said the voice which belonged to US Ambassador Edward Prado, the current resident.

Prado and his wife Maria, who both speak fluent Spanish, made their way to the front of the room to answer questions as the audience applauded. The ambassador, who has lived in Bosch Palace for over a year, quipped that “my house at home is a bit smaller. ”

Ambassador Prado told the Times that he hopes that Argentines come to visit the building as much as possible during his time in the country, emphasising that is not only important to both the US and Argentina, but also that it was a unique historical relic.

“People can see what life was like 75 years ago,” he said.

“Though people can’t usually visit because we live here,” he added with a smile.

The tour group began walking up the building’s enormous white staircase, which features an ornate engraving memorialising the time when US President Franklin Delano Roosevelt stayed in the residence from November 30 to December 2, 1936.

In total four US presidents have stayed at the Palacio Bosch, including Roosevelt, Dwight Eisenhower, George H.W. Bush and most recently, Barack Obama.

The sense of history infuses the building, the ambassador believes.

“Sometimes at night when we are alone in the house, my wife, Maria, and I can visualise these great world leaders along with prominent Argentines striding up the grand staircase, or waving to a crowd from the balcony overlooking the garden,” Prado writes in the introduction to The Ties That Bind: Los lazon que unen, 100 years of Palacio Bosch, a collection of artifacts from Palacio Bosch published early this year by the US Embassy.

In the house office, the main attraction sat in the back right corner of the room: Ernesto Bosch’s personal desk that he used when he served as the first president of Argentina’s Central Bank. Nearly a century on, US President Donald Trump signed agreements there while in Buenos Aires for the 2018 G20 Leaders Summit.

Connected to the office is the billiards room which contains a chimney that appears to not quite fit in. That’s because it is a replica.

When Robert Woods Bliss came up with the US$3 million Bosch asked for, the Argentine aristocrat remained true to his word. However, he would then have to face the unpleasant task of breaking the news to his wife, Elisa.

Needless to say she was furious. If she was going to move out of her beloved home, she insisted on at least moving the original chimney to their new, slightly more humble abode.

But the palace is arguably best known for its Versailles-esque gardens.

Assistant Cultural Affairs Officer Brian Asmus said it was important to the ambassador to open up the house more to Argentines, whether they be from diplomatic circles or just members of the public.

He described Prado as “very friendly [and] very down to earth,” adding that he wanted the Fourth of July to be like a “family gathering.”

Asmus hopes the palace can serve as a symbol for Argentines and Americans to unite around.

“[Bosch palace] is beyond politics. It’s beyond social class,” he told the Times. “This is part of our shared history.” 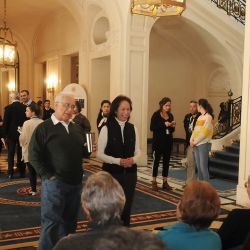 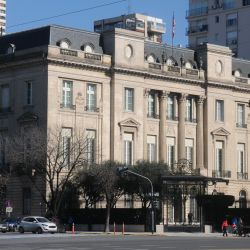 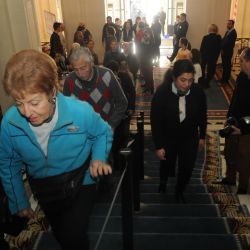 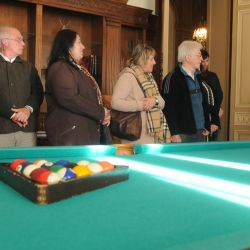 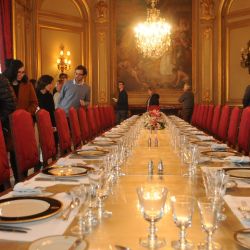 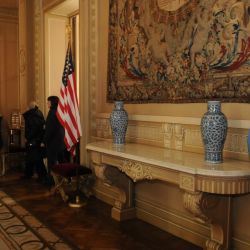 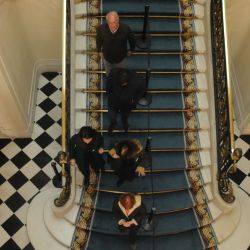 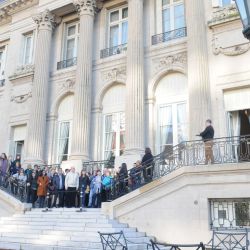