After a three-week vacation in the Patagonian city of Villa La Angostura, President Mauricio Macri kicked off 2018 this week with an international tour that took him to Russia, the World Economic Forum at Davos in Switzerland, and France. Demonstrating once again that his comfort overseas and on the international stage, Macri stayed on message, pitching Argentina as a land of opportunity in his attempts to attract international investment. The last leg of his trip was in Paris yesterday, where he met Friday with President Emanuel Macron in order to pave the way for the final negotiations in the never-ending quest to sign the Mercosur-EU freetrade agreement.

While the body language was encouraging, Macri’s ambitions of securing France’s support for the deal were dealt an important setback. “France must respect the bovine sector and an agreement could be destabilising,” the French President said at a joint conference at the Élysée Palace. Macri insisted, however, telling the press “we cannot lose this opportunity.” At Davos, Macri attended the World Economic Forum, meeting with world leaders and global businessmen. Macri was given a privileged spot in the tight agenda, awarded a keynote speech as G20 president. He wasted no time in reminding those present of Argentina’s new direction. “This is the longest period of economic growth since 2011, and investment is experiencing a boom due to a double-digit expansion,” he explained, standing and speaking in English. “Our economy is surging, inflation is at its lowest in a decade, wages have recovered and poverty and unemployment have fallen,” Macri added.

The president, who was accompanied by Economy Minister Nicolás Dujovne, Production Minister Francisco Cabrera, Foreing Minister Jorge Faurie, along with other members of his Cabinet and a few opposition governors, highlighted the attractiveness of mining and energy investments in Argentina. “[Vaca Muerta] is the world’s second largest reserve of nonconventional natural gas,” he pitched the crowd, “we also have the world’s largest lithium reserves.”

It wasn’t all roses for Macri, though, as an unfortunate statement during the Q&A section drew heavy criticism. Speaking of the potential for the Mercosur- EU deal, Macri told Borge Border, WEF President, “I believe [the deal] is a natural association as in South America we are all European descendants.”

Macri’s gaffe was immediately seized upon by opposition lawmakers, who blasted the president for ignoring the heritage of the continent’s indigenous cultures, as well as immigrants from other regions including Asia and Africa.

“Our President has omitted the existence in Argentina and South America of original settlers and migrants from all regions of the world,” explained Daniel Filmus, lawmaker for the Victory Front (FpV), “this is discrimination and the negation of the cultural diversity that is constitutive of our nation.” Another controversial statement concerned neighbouring Brazil. After its former president and presidential frontrunner Luiz Inácio Lula da Silva saw an appeals court uphold his conviction for corruption, Macri broke ranks to laud the country’s courts. Calling the ruling “excellent,” Macri asked the courts to press on: “We ask the Brazilian courts to continue investigating so we may find out who paid and received bribes in Argentina in Odebrecht’s projects.”

In Davos, Macri was accompanied by some of the country’s most prominent businessmen. At the Casa Argentina, the delegation’s official headquarter while at the exclusive resort town, Eduardo Elzstain (Grupo IRSA), Marcelo Mindlin (Pampa Energía), Sebastián Bagó (Bagó), Juan Manuel Bulgheroni (Pan American Energy), and Martín Eurnekian (Aeropuerto Argentina 2000) were seen showing their full support for the administration and their ambitious reform agenda. On the sidelines of the Forum, Macri also met with important figures from some of the world’s top companies, such as James Quincey and IIndra Nooyi, CEOs of Coca-Cola and Pepsi-Co respectively, and the heads of Norwegian energy giant Statoil and major goldminer GoldCorp. The president, accompanied by First Lady Juliana Awada, also received Dutch Queen — and fellow Argentine — Máxima Zorriegueta. From that meeting, which counted with the participation of Prime Minister Mark Rutte, Argentina and the Netherlands unveiled an agreement to build a nuclear reactor In the city of Petten (see box).

Angela Merkel was also among those who paid a visit to Argentina’s headquarters at the Swiss resort. President Macri welcomed the German Chancellor on Wednesday. The 15-minute visit was an “extraordinary gesture” on the part of the Merkel, Foreign Minister Jorge gushed to reporters. Merkel, who visited Argentina in 2017, has long expressed interest in possible future investment in Argentina. However, she also warned Argentines would first have to trust in the country’s potential before German companies make good on their eagerness to invest. “The meeting served to forge agreement about the themes of the G20 (which Argentina will preside throughout 2018), as well as negotiations between the Mercosur and the European Unions, the inclusion of Argentina in the OECD and about bilateral relations and the presence of German companies in the country (Argentina),” Faurie said. Macri also found time for meetings with Canadian Prime Minister Justin Trudeau and Swiss President Alain Berset.

Before making his way to the city of Davos, Macri made a quick pit stop in Moscow to have meetings with Russian Premier Vladimir Putin and local businessmen. Russian president Vladimir Putin confirmed, without providing details, that his nation’s firms would “participate in the modernisation of the rail network” in Argentina, after meeting with Macri at the Kremlin. Prior to their meeting, Mari met with representatives of 18 of Russia’s biggest companies in agriculture, energy, tech and construction.

“We have signed a declaration of cooperation, which means we will work to strengthen relations in various areas: technical, military, cultural, humanitarian, economic and commercial, among others,” Putin said during the visit. “We hope we can cooperate and compliment one another, (and) increase cultural, commercial and sports exchange,” Macri told reporters at the Kremlin, seated alongside Putin.

He noted that “Argentina had chosen to return to the world, to build relationships with important countries like Russia.” His government’s priority was to “see the country grow and reduce poverty,” he added, also taking the opportunity to thank the Russians for their role in search efforts for the missing ARA San Juan submarine. 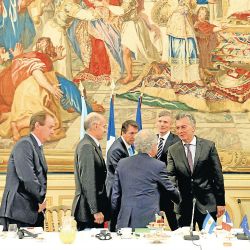 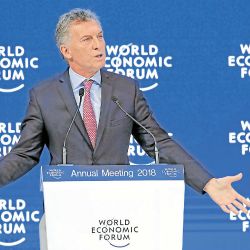