Provinces without new confirmed cases of the novel Covid-19 coronavirus will be allowed to loosen restrictions on citizens, the president confirmed, with the rest of the country entering a new stage of "mandatory and preventive social distancing.”

"Our results are still good, but we have not yet overcome the problem. We will maintain quarantine in the Buenos Aires metropolitan area, [and] in other areas of great community circulation," he said at a press conference at the Olivos presidential residence.

The three-week extension was a surprise, with most anticipating two weeks. The president said he was going further in order to calm people and stop the cycle of repeated announcements.

Health Ministry officials confirmed another 929 infections on Thursday, one of the highest daily totals since the coronavirus pandemic began. In total, 20,197 cases have now been recorded in Argentina, with the overwhelming majority in the capital and its surroundings. The death toll stands at 608, while officials say 5,993 people have recovered after infection.

According to data shown by the president during the announcement, Argentina’s mortality rate from Covid-19 is 12.8 per million inhabitants, among the lowest in Latin America.

Argentina has been under a mandatory lockdown since March 20, which was due to expire on Sunday, one of the longest quarantine measures introduced by any nation since the pandemic began. Restrictions have been lifted in recent weeks for some regions not reporting new cases.

Detailing the new stage of lockdown, President Fernández said there would be a three-week extension of the isolation period in the capital, Buenos Aires Province and other areas that report the highest concentrations of confirmed infections. Those include Chaco, parts of Córdoba, parts of Rosario and some cities in Río Negro Province.

From now on, "there will be two types of quarantine: one of isolation and the other of social distancing," the president said, confirming that those with looser restrictions would enter “a new normal.” 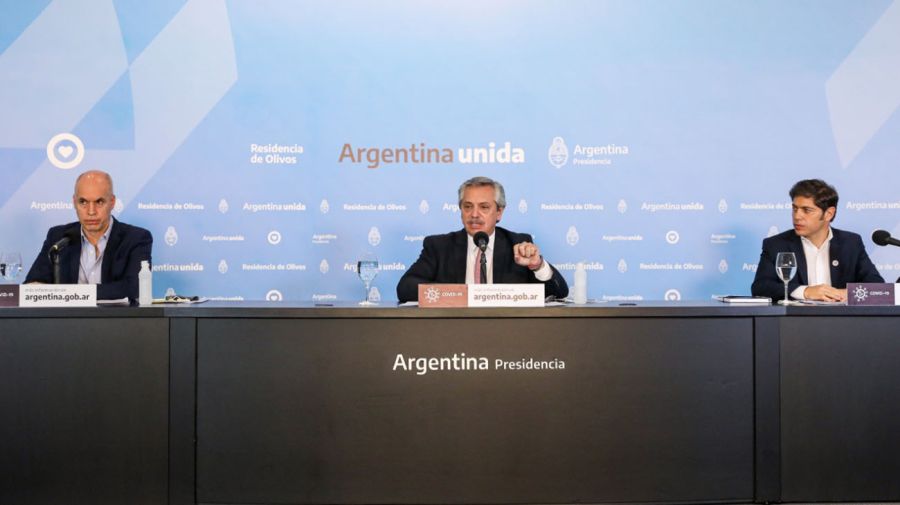 The capital and the 13 districts that surround it, a conglomerate of 14 million inhabitants known as the Conurbano, account for “85 percent of cases," revealed Kicillof, speaking after the president. The provincial governor said some industry would be allowed to restart, but that restrictions on residents would remain tight.

Kicillof said there would be a system of "advances and setbacks depending on whether the situation improves or worsens," and that the Conurbano would continue under lockdown and the “the same situation as before."  In areas of no circulation, factories and industry would be allowed to return to work under strict conditions.

Rodríguez Larreta, the opposition City mayor, said that he would loosen some rules, allowing residents to begin exercising outdoors at night and children to leave their homes for walks on Saturdays and Sundays. Runners will be allowed out between 8pm and 8am and in groups of no more than two.

Addressing the public, he said he understood the “anguish” people felt after almost 80 days of confinement to their homes (bar essential workers), but he said the sacrifice had been worth it.

“I want to highlight the positive effect of the quarantine. If the [number of] cases increases, we will have to go back" to harsher restrictions, he said.

The average age of fatalities who had Covid-19 in the City is 76.3 years and among those aged over 80 "almost one in four dies," revealed the mayor.

Both Kicillof and Rodríguez Larreta again expressed fears over the levels of contagion in low-income neighbourhoods, villas and nursing and care homes in and around the capital.

Fernández said the lockdown had been a success to date, highlighting that in 18 of Argentina’s 24 regions (23 provinces and Buenos Aires City)  "there is no community circulation" of the virus. Measures in these areas would become increasingly flexible with many businesses and activities allowed to restart.

Only massive gatherings, sporting or musical shows and events, and any type of grouping would be banned, he added.

Argentina’s economy, in recession for the last two years, has been hit hard by the pandemic-led shutdown. GDP is expected to contract by between seven and ten percent this year, according to most estimates. Industrial output plunged 33.5 percent in April year-on-year, the INDEC national statistics bureau reported on Thursday.

The government has to date invested the equivalent of 2.6 percent of GDP on emergency measures to support the poor and small and medium businesses.