Argentina’s politicians ramped up the rhetoric this week as campaigning intensified ahead of tomorrow’s PASO primaries, with both fingers letting rip at their opponents in the bid to swap undecided voters.

The following day, with Vice-President Cristina Fernández de Kirchner in attendance, the head of state once again took the stage at Technopolis as he lead the charge for last-minute votes.

President Fernández leaned hard into a narrative that said the worst of the coronavirus pandemic is over and that Argentina’s economy is on the rebound after the devastating 9.9 percent fall in gross domestic product recorded last calendar year.

Expressed his "pride" that he had "saved thousands of PyMES (small and medium-sized firms) and Argentine jobs" with aid and support programmes, the Peronist leader sought to paint Buenos Aires City Mayor Horacio Rodríguez Larreta as immune to the needs to everyday people, taking aim at the opposition leader’s initiatives against severance.

"For them jobs are a cost, that’s why they want to end severance. For us they are capital, a common project of companies and the state. Labour is not a cost, it’s a contribution towards growth, understand that once and for all. We need rights to be recognised. Since secondary school we know that it is so, we came out to support a colonel [Juan Perón] who spoke of that," insisted Fernández, before declaring that “Labour is dignity.”

That’s why collective bargaining has remained open through until today. That has to do with a form of perceiving the country we want," he argued.

On Thursday, Fernández returned to the theme of dignity, saying that he was eager to "end so much inequality and so much decline." Referencing criticism from the opposition about the state's role and public spending during the pandemic, he declared: "My obligation is with the people, the rest I don't give a damn about."

"To those who voted for us in 2019, to those who for us today and doubt, to those who did not vote for us, I ask that we stand together," he said.
Fernández de Kirchner, who spoke before the president, directly accused the opposition of "lying." The veep defended the government's handling of the pandemic and claimed the ruling coalition was "mistreated" by the media. Riffing on the Mauricio Macri administration's time in office, she slammed the opposition's handling of the recovery, saying salaries had plunged on their watch.

"There are two models of the country, I have no doubt," said the former president, referring to the main electoral coalitions.

Despite the fiery rhetoric, however, she insisted that Argentina had to be "rebuilt" and said that on Monday, all political parties had a responsibility to help create "a country without grievances."

From the Casa Rosada, sources later told the Noticias Argentinas news agency that voters had heard "two very good speeches" from the president and vice-president with "great content." Officials were said to be delighted by the appearance of Peronist activists.

Perhaps the ruling coalition’s most prominent candidate in this race, Frente de Todos hopeful for Buenos Aires Province Victoria Tolosa Paz, used her speech on Wednesday to declare that “we are emerging from the pandemic with the worst over."

"We’re experiencing a campaign closure with the certainty that we can still look each other in the eye. Some candidates had to cross the Riachuelo because they could not do that," she declared.

Speeches from Massa in Junín and Máximo Kirchner in Bahía Blanca were simultaneously transmitted via the social networks of the coalition.

"It is no coincidence that those plunging the country into debt have always been City Mayors, [Fernando] de la Rúa, Aníbal Ibarra, [Mauricio] Macri and Larreta. They think that Argentina is the City of Buenos Aires," declared Kirchner, as he played to the ruling coalition’s base in the nation’s most-populous province.

Speaking Wednesday, María Eugenia Vidal wound up her PASO electoral campaign with a speech appealing to voter emotions that was dominated by harsh criticisms of the government. Tomorrow she will compete against Adolfo Rubinstein and Ricardo López Murphy, to see who will represent the Juntos alliance in the November 14 midterms.

"While our kids had no classes, the presidential dog was being trained," said the former Buenos Aires Province governor ironically, as he made reference to Argentina’s extended school closures during the coronavirus pandemic.

Vidal’s predominantly anti-government tone was delivered with a view to attracting undecided voters, beginning with the phrase "Argentina is in mourning."

"While our grandparents awaited their vaccines, this government vaccinated its officials," blasted Vidal in reference to the so-called ‘VIP vaccine’ scandal that saw health minister Ginés González García resign his post. The PASO hopeful told gathered supporters that the government was "mocking" and "cheating" the population.

Speaking at the Rural Society grounds in Palermo on her 48th birthday, Vidal aimed her fire at President Fernández not only for his illegal party at Olivos but for his handling of the pandemic. She concluded that  "instead of giving answers, he gets annoyed, yells at the people and casts the blame elsewhere. He tells you that between more poor people and more dead people, he picks the former and we end up with more poor people and more dead people.”

Describing the state of affairs as “annoying,” Vidal said voters must transform that anger into saying “we’ve had enough."

"This election is not about proposals but about values, about who is lying and who isn’t," said Vidal, to an ovation from those present, including opposition leaders as Rodríguez Larreta, ex-president Macri, PRO party chair Patricia Bullrich, Senator Martín Lousteau and several other Juntos por el Cambio deputies.

For the campaign closure Vidal was joined by the next two on her "Juntos Podemos Más" list, Martín Tetaz and Paula Oliveto, who tomorrow will be competing against the lists topped by Rubinstein (Adelante Ciudad) and López Murphy (Republicanos Unidos).

Rodríguez Larreta, a likely presidential hopeful in 2023, made a strong appeal to Juntos por el Cambio militants to "grind their teeth" for tomorrow’s elections.

"We need the votes of Juntos por el Cambio [in Congress] to continue stopping them. Don’t let up, through to tomorrow there are many people we can convince," he declared.

Lousteau chimed in: "While many national officials jumped the queue to be vaccinated, the employees, volunteers and officials of City Hall did the opposite, facing up to the pandemic in things which had never been done before in hotels and vaccination and testing centres."

The senator continued that he shared "the commitment of Pato [Bullrich] to tour the country nationwide promoting her tougher version of Juntos por el Cambio, after which society must decide in what order it wants the lists for the PASO [primaries]."

Opposition leaders also showed their support for candidates running on their tickets nationwide, with Macri joining Mario Negri in Córdoba Province to support his run for the lower house. "We want each Argentine to say enough with the lies, we want to work," said the former president, who said he often felt like a cordobés (resident of Córdoba). 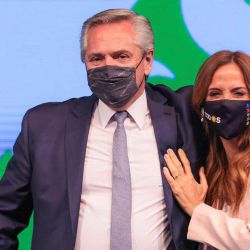 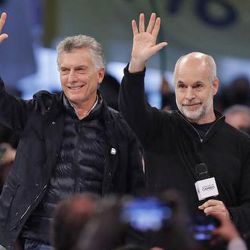 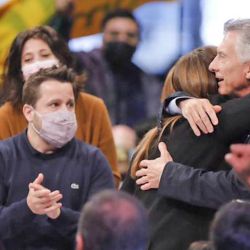 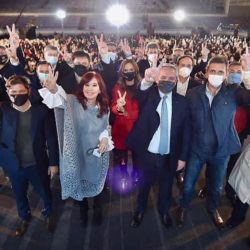