With pressure mounting on the government and the Gendarmerie, a new 200-page report was shown to the media last week before the courts. It revealed that a panel of experts now believe late AMIA prosecutor was murdered on that fateful night in 2015.

The investigation into Alberto Nisman’s death returned to the fore after a leaked report conducted by a team of experts led by the Gendarmerie (Border Guard) indicated the AMIA special prosecutor was likely murdered by two individuals, who then manipulated the crime scene to make it look like a suicide.

The 200-page report was finished this week and officially submitted to the courts yesterday, sources confirmed. But the furore began earlier in  the week as the report’s conclusions were made public.

Both sides of the political spectrum eagerly seized upon the report’s release to accuse the other of attempting to use the incident politically,  particularly former president Cristina Fernández de Kirchner, who accused the Mauricio Macri administration of creating a “smoke screen” to  bolster the reputation of the under-fire Gendarmerie and to reduce pressure on the government following the still-unsolved disappearance of  Santiago Maldonado. Pressure has been building on both the government and the Gendarmerie, who have been accused of being involved in the 28-yearold’s disappearance.

The report’s findings are a stark contradiction to a previous analysis carried out by the Supreme Court’s Medical Board (Cuerpo Médico  Forense), which two years ago concluded there was no evidence of third-party involvement in the late special prosecutor’s death.

Nisman was found dead of a gunshot wound to the head in his apartment in 2015, a day before he was due to testify before Congress about his  accusation that Fernández de Kirchner plotted with Iranian officials to cover up Iran’s alleged role in the terrorist attacks in the Argentine capital.

Sources inside the legal system confirmed yesterday that the federal courts have received a final copy of the controversial report carried out by the Interdisciplinary Board (Junta Interdisciplinaria), which is made up of the Border Guard investigators, representatives of the Nisman family and Diego Lagomarsino, an IT specialist who has been charged with providing the firearm that caused the prosecutor’s death. Now they are in  possession of the document, Federal Judge Julián Ercolini, Prosecutor Eduardo Taiano and their teams will examine the arguments used by the  investigators to come to their conclusion: that the late AMIA special prosecutor was murdered by two people in the bathroom of his apartment.

Another shocking detail that has emerged in recent weeks is that traces of ketamine — anesthesia commonly used on animals or as a recreative  psychedelic drug — were found in Nisman’s body, suggesting he may have been sedated by the potential attackers. Adding to that hypothesis  was the physical damage to Nisman’s body — including a broken nasal bone and bruises in the leg and kidney region — which could indicate he  was subdued before being killed, details which hadn’t emerged in the Medical Board’s original report. Also in question is the precise time of death, which the 2015 forensic analysis pinned at approximately 8am Monday January 18, compared to between 2am and 3am the previous day in the  Interdisciplinary Board’s report.

Taiano and Border Guard experts reportedly debated as to whether to open the doors to another measure: the reconstruction of the death. The  investigators so far have carried out a recreation, which has other elements too: the death is played out in an environment similar to the actual setting – in this case a replica bathroom – without the presence of witnesses or legal officials. Two weeks ago, the prosecutor asked Ercolini to  greenlight his decision to reconstruct the scene. Two days later, Taiana received the judge’s approval to begin work.

The measure will allow the Judiciary to exhaust every legal instance and to rule out doubts or contradictions that could arise in the report that the  Border Guard will produce.

Taiano has been insisting on a reconstruction of Nisman’s death, a step that the Border Guards do not think is necessary. Instead, the force  carried out a re-creation of the death. To do so, a replica of Nisman’s bathroom was built and various hypotheses were tried out according to the  position of the body, the weapon and other scientific evidence. The recreation took place in the Centinela building, the force’s headquarters.

The official legal reconstruction of Nisman’s death would be done in the bathroom of the Le Parc apartment, where the event actually took place and must be carried out in the presence of witnesses – in this case, for example, the emergency doctor that checked him on that Sunday night and Nisman’s mother could be summoned – as well as the judge and prosecutor. The apartment, though, is currently being rented out.

“What the Border Guards said broadly matches with what was reported,” a source with access to the experts’ work told the Perfil newspaper.  According to the Border Guards, Nisman – allegedly under the effects of the drug ketamine – was murdered by two people, one who acted as a  “skeleton,” holding the prosecutor with a knee on the ground and another firing the gun on the side of the righthand temple. This was confirmed by additional sources to Perfil.

Sources in the Supreme Court said that for the country’s highest court “the matter had been exhausted” and that they couldn’t make any further  comment. Sources in the Border Guards also sought to put daylight between themselves andthe conclusions and said that the investigators would  have to explain any possible contradictions, if the courts deemed it necessary.

Legal sources have said that if the final results indicate a homicide took place, those most under scrutiny in the short term would be IT specialist Diego Lagomarsino and the Federal Police security detail assigned to protect Nisman. Lagomarsino’s defence team, however, considers it proven that he wasn’t at the scene at the time of the death.

Last weekend’s leaks came at an opportune moment for the government, which had become the centre of attention. While the Gendarmerie are  being investigated for the disappearance of Santiago Maldonado, the 28-year-old who went missing in Chubut, the force’s conclusions backing  the theory of a homicide were leaked to the press – for the second time in a year and this time, with a far greater detail made public. The report  was only officially submitted yesterday to the courts. The assumption is that the government sought to bolster the Border Guards and put the Nisman case back on the agenda in order to displace the Maldonado case, the single biggest problem in the headlines for the government and Security Minister Patricia Bullrich, one of its key officials.

“[The leaks] respond to an objective, they are an immense smoke screen to cover up Santiago Maldonado. Because the question that we’ll keep  on asking to the Border Guards and the government is: where is Santiago Maldonado,” asked Fernández de Kirchner in a radio interview with Victor Hugo Morales on Thursday.

The former president was also responding to accusations by Elisa Carrió, the Let’s Change (Cambiemos) coalition’s lead candidate in Buenos  Aires City, who blamed the previous administration for Nisman’s death. “The Border Guard report shows Cristina Kirchner’s government was  responsible for Nisman’s crime and its cover- up with the help of [César] Milani and Aníbal Fernandez.”

A medical board carried out by the Supreme Court’s forensic team found in 2015 that there weren’t any elements to hold that there were any  third parties at the scene of Nisman’s death. The collection of evidence and the analysis of the bloodstains was carried out by Federal Police officers. Last week no one at either at the Supreme Court nor the Federal Police defended the investigators of the first report.

Contradictions. There are some key contradictions between the Gendarmerie’s report and the findings of the medical board carried out by the Supreme Court’s forensic team in 2015.

The collection of evidence and the analysis of the bloodstains had been carried out by Federal Police officers.

In light of these contrasting hypotheses, below are the major elements in each report:

According to the leaks and sources, the Gendarmerie have placed the time of the prosecutor’s death in the early hours of the Sunday, between 2am and 3am, which is five or six hours before the official time of death stipulated by the medical board.

As a result of the recreation of the moment of Nisman’s death, the experts seem to have determined that the prosecutor was “murdered” by two  people. One of them would have held Nisman while another shot him in the head. Interpretations of the investigation into the firearm were completely different. In this case the Border Guards have argued that given the absence of “particles characteristic of gunshot residue” on  Nisman’s hand, the gun must have been fired by a third party. As the hand had blood on it, they have argued that the third party held the  prosecutor’s hand to fire the shot.

It has been reported that one of the elements that has convinced the Border Guard experts of the homicide theory is allegedly the absence of  ingerprints in the apartment, except those belonging to Nisman.

The ketamine found in Nisman’s body was reportedly identified by the Border Guards and was something that the medical board didn’t identify.  With regard to the blows to the face and body of Nisman, the investigators believe that they were carried out by the aggressors to subdue Nisman and later, to kill him.

The Supreme Court’s medical board determined that Nisman died between 8am and noon on the Sunday. The prosecutor’s body was found on Sunday night. The experts were unable to prove the presence of third parties at the scene of Nisman’s death. They weren’t conclusive in their  report but based on the evidence collected by the Federal Police they couldn’t state that there was a third party. One of the key elements in their  report was the circumstances surrounding the gun which fired the bullet that caused the prosecutor’s death. For the investigators, it was found  underneath the left shoulder of Nisman’s body.

They said that “particles characteristic of gunshot residue had not been found” on the prosecutor’s right hand, as the tests showed that of three  elements necessary to conclude the presence of gunshot residue only two were found. For that reason they did not rule out suicide and said that  the blood on the hand could have removed the remaining element.

The fingerprints are another element of disagreement between the experts. The Federal Police investigators found Nisman’s fingerprints, his mother’s and Lagomarsino’s on a mug. There has also been talk of a fingerprint belonging to a domestic worker.

For this reason they have held that the scene wasn’t “cleaned.” Ketamine was not found in the checks on the body. The blows were attributed to  the body’s fall after the shot was fired.

CREDIT: TIMES/PERFIL
WITH REPORTING BY EMILIA DELFINO AND PATRICIA BLANCO

by TIMES/PERFIL, WITH REPORTING BY EMILIA DELFINO AND PATRICIA BLANCO 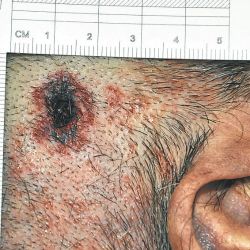 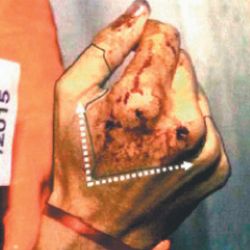 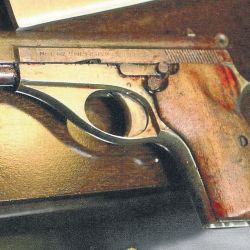