Argentina is standing out for the wrong reasons in its six month battle to ward off the coronavirus pandemic.

As some relief finally arrives to places like Brazil, Chile, Colombia, Mexico and Peru that were hit hard by the respiratory disease, Argentina is seeing its curve nationwide steepen with cases spreading to ill-prepared interior provinces and daily death records set on multiple days this week.

South America’s second-largest nation has the most deaths per million people over a seven-day basis in the world and has the most cases globally using the same metric and time period after only Israel, Montenegro, Bahrain and Spain, according to data compiled by Bloomberg.

Before this week, Argentina hadn’t posted a single day with more than 400 deaths in the previous 24 hours. But every day this week the tally has topped that figure with a record 470 people reported to have died from Covid-19 on Tuesday. Some of the fatalities occurred as long as a month ago and are now being loaded into the system, according to Federico Tiberti, a PhD candidate at Princeton University who has been analysing the data.

The Health Ministry didn’t reply to a request for comment on the sudden rise. In global rankings, Argentina is 10th in cases with 664,799 and 14th in deaths with 14,376.

“Argentina is going through a very difficult situation,” Dr. Marcos Espinal, the director of communicable diseases at the Pan American Health Organisation, said in a webcast on September 23. “And we can’t say they’ve yet reached a peak.” 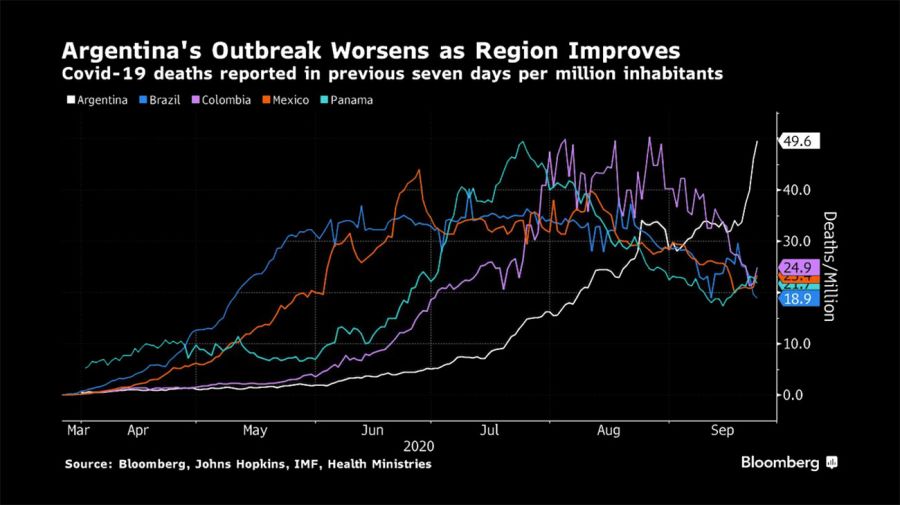 La Rioja province leads the nation with a mortality rate of 173 per million inhabitants, followed by Jujuy province with 125 deaths per million and Rio Negro with 115 per million. The hospitals in many provinces, which are ill-equipped and have far fewer resources than the greater Buenos Aires area, are also nearing capacity.

Intensive care units at hospitals in Río Negro Province in Patagonia have 87 percent of intensive care beds occupied between Covid and non-Covid patients. Two of the countries famed wine regions, Mendoza and Salta, both have 81 percent of ICU beds occupied, far above the 60 percent national average. In some hospitals in Santa Fe Province, a key export hub, ICU bed occupation is already at 90 percent, according to La Nación.

Mendoza and Rosario (the capital of Santa Fe) will see cases continue to accelerate rapidly for at least another week, according to Federico Collado, research director at data analytics firm Urbeos, which examines transit data by socioeconomic demographics.

Low-income suburbs stand to be hit hardest. For example, five times as many low-income residents in Rosario travel regularly to densely packed high-risk zones in the city than middle and upper class residents. Collado advocates for Covid-19 reopening policies that distinguish between areas where populations are more prone to high-risk travel than areas where pedestrian traffic is minimal.

“The most serious problem in the coming months is concentrated in the population that lives in low-income suburban neighbourhoods,” Collado said. “If we don’t understand this point in our cities, we’ll continue seeing cases grow and above all, we’ll run the risk of new outbreaks like what we’re seeing in Europe.”