Most senior Catholic cleric ever convicted of child sex abuse sent to prison and awaits his sentence in two weeks time for molesting choirboys in Melbourne two decades ago.

The most senior Catholic cleric ever convicted of child sex abuse has been sent to prison and will wait two weeks behind bars to learn his sentence for molesting two choirboys in a Melbourne cathedral two decades ago.

A Victorian state court judge revoked Cardinal George Pell's bail at the end of a sentencing hearing Wednesday in a packed courtroom. The judge said he would deliver his sentence on March 13.

The 77-year-old Pell, who could face 50 years in prison, was taken from the court to the Melbourne Assessment Prison, a maximum security facility where inmates new to the state penal system are assessed.

A jury unanimously convicted Pell in December of abusing the two 13-year-olds in a rear room of St. Patrick's Cathedral in 1996 weeks after becoming archbishop of Melbourne, Australia's second-largest city. But Pell wasn't taken into custody immediately because he had surgery scheduled to have both knees replaced.

Acting Vatican spokesman Alessandro Gisotti read a brief statement that described the news of the 77-year-old's prelate's conviction "painful." He later tweeted confirmation that Pell "is no longer" the Holy See's economy chief. Pell had been appointed by Francis to be the Vatican's treasurer and help reform the Holy See's scandal-plagued financial institution.

In 2016, reports emerged that Australian police were investigating abuse allegations against Pell that involved minors. But the pope allowed the cardinal to stay on in his Vatican roles as Francis' leading financial adviser.

Pell's five-year mandate was due to expire this month, and Francis had not been expected to renew it.

This serves as another blow to Francis' reputation, particularly in light of the Zanchetta case earlier this year. Francis had brought Zanchetta to the Vatican and given him a high-ranking job after he resigned suddenly from his post in 2017.

Gisotti claimed that “Cardinal Pell maintains his innocence and has the right to defend himself until the last stage of appeal.” But the spokesman added that while awaiting the "definitive assessment of the facts," Pell is "prohibited from exercising public ministry and from having any voluntary contact whatsoever with minors."

Pell faced an abusive crowd Wednesday as he entered court half an hour before his sentencing hearing began.

"I hope you burn in hell!" one man shouted while pushing against a cluster of police officers trying to shield the cardinal as he walked into the courthouse. "You're a paedophile! You're a criminal! You're a monster!"

Pell's lawyer Robert Richter was heckled by members of the public during the lunch break, prompting the chief judge, Peter Kidd, to warn people in the gallery that they could be charged with contempt of court for such behaviour.

Kidd said such acts directed at Pell and Richter showed that Pell was being blamed for the sexual abuse and cover-ups within the Catholic Church recently exposed by a government-commissioned investigation into Australian institutions' handling of abuse allegations.

"The Catholic Church is not on trial ... I'm imposing sentence on Cardinal Pell for what he did," Kidd said.

The court had until Tuesday forbidden publication of any details about the trial because Pell had faced a second trial in April on charges that he indecently assaulted two boys aged 9 11 as a young priest in the late 1970s in a public pool in his hometown of Ballarat. Those charges have now been dropped.

The judge said Pell was guilty of a breach of trust with an element of brutality and had had a sense of impunity. "I see this as callous, brazen offending — blatant," Kidd said.

"At the time, he thought he was going to get away with it. Otherwise he wouldn't have done it," Kidd added.

Richter had told the jury during the trial that "only a mad man" would take the risk of sexually abusing two boys in a cathedral room with the door open and people likely to wander in.

Kidd responded that the jury rejected this appeal on the basis that ‘there are no medical records suggesting he is mad. The only inference I can make is that he thought he could get away with it. People don’t go ahead and do what he did without thinking about it. People make choices.’

On Wednesday, Richter described the abuse as a "temporary loss of judgment" in response to an "irresistible impulse" which resulted in ‘no more than a plain vanilla case of sexual penetration where the child is not participating.’

Pell had maintained his innocence throughout, describing the accusations as "vile and disgusting conduct." His lawyers have appealed the convictions and were scheduled to appear in the Court of Appeal on Wednesday afternoon to apply for bail. But the bail application was later withdrawn, and no date has been set for an appeal hearing.

Pell lawyer Paul Galbally said the cardinal had decided against applying for bail.

"He believes it is appropriate for him to await his sentencing" in prison, Galbally said in a statement.

The victim who testified at Pell's trial said in a statement that since the conviction was revealed, he has experienced "shame, loneliness, depression and struggle." The man said it had taken him years to understand the impact the assault had on his life.

The other victim died of a heroin overdose that his father attributed to the aftermath of the abuse. Neither victim can be named under state law.

The revelations in the Pell case came in the same month that the Vatican announced that Francis approved the expulsion from the priesthood of a former high-ranking American cardinal, Theodore McCarrick, for sexual abuse of minors and adults.

The convictions were also confirmed days after Francis concluded his extraordinary summit of Catholic leaders summoned to Rome for a tutorial on preventing clergy sexual abuse and protecting children from predator priests. 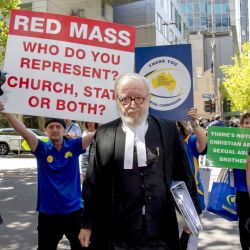 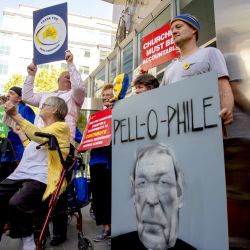 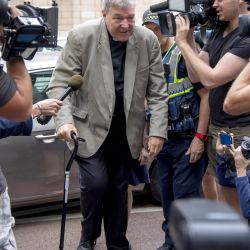