Donald Trump’s presidency careened toward its conclusion this week with a shocking display of lawlessness, as a mob of supporters inflamed by the president stormed the US Capitol in a bid to disrupt the final certification of his re-election defeat.

A day that started with Trump basking in the adulation of his supporters ended with him on the defence and politically radioactive. His vice-president, Mike Pence, fellow Republicans and business leaders conspicuously distanced themselves while top advisers considered resigning their posts.

Even Trump’s staunch ally Senator Lindsey Graham said he had seen enough. “Trump and I, we’ve had a hell of a journey. I hate it to end this way,” said Graham, the South Carolina senator who was a confidant and golf partner to the president as recently as Christmas Day. “All I can say is, count me out. Enough is enough. I’ve tried to be helpful.”

Senate Majority Leader Mitch McConnell, an icon among conservatives, delivered a devastating condemnation on the floor of the Senate, warning that the attempts to overthrow the election “would damage our republic forever.”

Former president George W. Bush said the assault on the Capitol was “undertaken by people whose passions have been inflamed by falsehoods and false hopes.“ And his successor, Barack Obama, said history would remember the violence “incited by a sitting president who has continued to baselessly lie about the outcome of a lawful election, as a moment of great dishonour and shame for our nation.”

Trump’s handling of the violence – which saw him continue to praise rioters even as clashes with Capitol Police continued – also led to new restrictions and warnings from the social media companies that propelled his political rise, including Twitter, Facebook and Google’s YouTube, along with widespread condemnation from across the political spectrum.

The historic spectacle only underscored the president’s diminished standing and dissipating options after refusing to accept his defeat at the hands of voters.

Talk in Washington swirled over whether the Cabinet should consider removing Trump by invoking the 25th amendment. Some Republican lawmakers, as well as the Democrats, have discussed the possibility of impeaching Trump – a move that could prevent him from seeking public office again.

Several White House officials resigned in the wake of the unprecedented violence at the Capitol and others weighed departures. Among the big name departures were Education Secretary Betsy DeVos and Transportation Secretary Elaine Chao – one of Trump's longest serving cabinet members and McConnell’s wife – who announced they were stepping down over the "entirely avoidable" violence.

The twilight of Trump’s presidency was obvious even before chaos erupted at the Capitol. On Tuesday, voters in Georgia – until recently a reliable Republican stronghold – elected two Democrats to the US Senate, giving President-elect Joe Biden’s party control of the upper chamber despite Trump’s efforts to buoy the state’s Republican incumbents.

And Pence – long a loyal foot soldier in Trump’s insurgent campaign against Washington – said he could not violate his oath to uphold the Constitution by rejecting Electoral College votes for Biden from states where the president’s claims that fraud cost him the election.

Pence’s determination came despite a last-ditch phone call. Trump framed the choice in vulgar language, and when Pence revealed his decision, the president reacted angrily, according to people familiar with the incident.

Minutes later, Trump said publicly that he would be “very disappointed” with his vice-president if he failed to block the count of Electoral College votes.

Pence’s decision may create an irrevocable rift between the pair, with Trump tweeting Pence “didn’t have the courage to do what should have been done.” Pence’s chief-of-staff, Marc Short, has been banned from White House grounds, according to two people familiar with the matter. 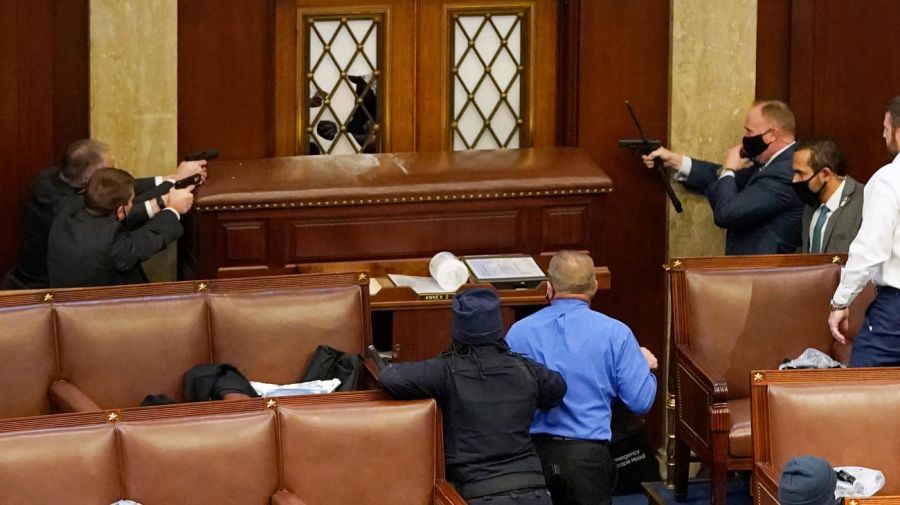 The turmoil within the administration underscored the historic gravity of the images from the Capitol, where rioters smashed windows, scaled walls and vandalised offices. The incident will stand as the coda for a presidency that could never escape Trump’s inability to rise to the moment and put his personal interests aside.

At least five people, including one police officer, died during the mayhem Wednesday, with one woman shot by Capitol Police when protesters stormed the Capitol building. More than 50 people were arrested and a number of guns were seized.

Though Trump did eventually condemn the violence in a video statement on Thursday, for much of the preceding day, the president had seemed to relish the chaos he had fomented.

While never calling for violence, Trump had encouraged supporters to pour into Washington on Wednesday with repeated suggestions that the ceremonial certification of the election results could somehow be overturned. As he addressed the assembled crowd earlier in the day outside the White House, he called on them to march on the Capitol and give “weak” Republican lawmakers “the kind of pride and boldness that they need to take back our country.“

As events began spiralling out of control – with Pence whisked from the Senate floor by security, lawmakers ordered to shelter in place and don protective hoods, and rioters with Confederate flags roaming the halls of the Capitol – the president did little to calm the situation.

Top aides prodded Trump to react, with Chief-of-Staff Mark Meadows, Cipollone, and social media director Dan Scavino all urging him to say something, according to a person familiar with the discussions.

The president bounced back and forth between the Oval Office and his private dining room as he watched coverage of the siege on television. In the end, it took him more than 45 minutes to send a tweet asking his supporters to “stay peaceful.” Neither that tweet nor a subsequent post explicitly called on followers to leave the Capitol.

It was only hours later, after public calls from a chorus that included Biden, congressional leaders, former aides and Republican allies – as well as private persuasion from his daughter Ivanka Trump and other senior advisers – that Trump issued a video telling his supporters to “go home.”

Prominent allies expressed dismay with the president’s behaviour, but Trump was unapologetic, telling supporters who overran the Capitol Police to menace lawmakers that they were “very special.” While some aides were shaken by the events and viewed them as potentially catastrophic for Trump’s political future, others floated unfounded conspiracy theories that political enemies had embedded with Trump supporters to incite the violence, according to officials who requested anonymity.

The president’s response was in some ways familiar. Since entering public life, he’s stubbornly refused to grapple with the consequences of his actions, and never worried that his flirtation with radical elements would weaken the republic he was charged with defending. Nor have brazen double-standards – like the disparate police treatment of his supporters, compared to Black Lives Matters demonstrators – been an issue for Trump. In many ways, it will be up to his successor to address the ills demonstrated by Wednesday’s events.

Still, the Capitol Hill violence will haunt Trump through whatever he chooses as his next act. Having already lost his mantle as a unique political talent able to win despite outrageous acts, he has now sacrificed any claim he had to being a “law and order” leader.

Four years after promising to banish “American carnage” in his inaugural address on the steps of the Capitol, he brought it to the door.