Revenge of the drones: how Ariel Holan lead Independiente to Copa Sudamericana glory

Former field hockey coach’s innovative, methodical approach to training – which includes the use of machines buzzing away filming in the sky – was once dismissed as sectors of the media. On Wednesday, he was vindicated.

The tears that rolled down Ariel Holan’s face on the Maracaná pitch told their own story. The Independiente coach, a boyhood fan of the Avellaneda club, was overcome by the emotion of lifting the 2018 Copa Sudamericana title in the most hostile of climes, after the Rojo dug deep to take a draw against Flamengo and prevail 3-2 on aggregate after 180 minutes of enthralling action.

It is the first football crown that Holan has won in his career on the bench. And it is also a vindication of the work carried out by a man that does not fit into the mould of your average Primera División coach, and indeed was made to suffer for the perceived cardinal sin of challenging the accepted norms of a deeply conservative league.

Holan’s first offence in the eyes of opinion-makers was to come from an essentially non-footballing background.

The 57-year-old Lomas de Zamora native started out in the parallel world of women’s field hockey, coaching some of Argentina’s biggest clubs and taking Uruguay to a bronze medal in the 2003 Panamerican Games. An early fan of technology, Holan went to the extreme of selling his car in order to fund the purchase of a computer he needed to develop his own software for monitoring performances.

Judge probes whether Messi was spied on by government agencies

His innovative, methodical approach to training was noted by then-River Plate boss Matías Almeyda, who took him to the Monumental to work in football professionally for the first time as his assistant. The partnership worked perfectly: River returned to the Primera in Almeyda’s first season in charge in 2012, and two years later the double-act secured another Nacional B title, this time with Banfield. Those successes encouraged Holan to strike out on his own, first spending two impressive years at Defensa y Justicia honing a dynamic style of play before stepping up to the big leagues at the helm of Independiente at the start of this year.

The media’s nails were already sharpened when the unassuming coach walked through the doors at Avellaneda. Holan entered Independiente with a bumper backroom staff of 12, including two GPS monitoring experts and a video analyst. But it was the use of drones buzzing above the Villa Domínica training ground that most provoked the derision of those observers. Many believed it was a gimmick, an unnecessary offence against the ‘purity’ of football destined to failure. Holan, however, has never doubted that, while matches are still won within the confines of the pitch, such technology can give his sides an extra boost compared to rivals. “I don’t care what they think about the drones,” the coach fired in an interview with Página 12 in July, as Independiente started to inch toward the Sudamericana.

“I am not going to start explaining to all and sundry why I use drones. I have always been this way, all the players and hockey players I have worked with know that.”

The past 12 months have indeed been systematic proof of the benefit that the team of analysts perched at the side of Independiente’s training sessions have bestowed. After a chaotic start to the 2016-17 season had forced Gabriel Milito out of the job, Holan steered Independiente to sixth at the end of the campaign and suffered just two defeats in 12 Sudamericana outings on their way to the title. A team that blended the youthful exuberance of Ezequiel Barco, Maxi Meza, Alan Franco and Fabricio Bustos with experienced campaigners like Walter Erviti and Emanuel Gigliotti proved an extremely tough prospect. Holan has also promoted an unshakeable belief in his charges, even the youngest members of his squad – it was 18-year-old Barco, indeed, that stepped up to fire home what proved to be the decisive goal on Wednesday from the penalty spot, showing nerves of steel at such a tender age.

Wednesday’s aftermath may have been the first time in his short Rojo tenure that Holan finally allowed himself to lose his famous control and coherence, if only for a few seconds. “I don’t know, I don’t know, I don’t know,” he stammered to reporters in the euphoria of victory. “I cannot speak. This is my club, I love it with all my soul. We won because we had football, we had bravery. I have 28 lions here, I am proud to be their trainer.”

Holan will now face the challenge of moving on from this wonderful feat.

After losing star forward Emiliano Rigoni over the winter the coach is likely to see young Barco exit in January, with Gerardo Martino of Atlanta United keen to take the teenager to MLS. The likes of Meza and Bustos will also be in the shop window, as Independiente face the perennial problem in South America of keeping together a winning team in adverse economic conditions. Next year will also bring new challenges: a return to the coveted Libertadores, but also an admittedly distant bid for the Primera title nine points shy of Boca, a crown the Rojo last won all the way back in 2002.

Barco may not be there, and there may be a few other faces missing too when Independiente return in the new year. But if Holan stays on for another campaign one thing is for certain: the drones will be out in force, working overtime to build on this memorable end to 2017 for the outsider who has enraptured the red half of Avellaneda. 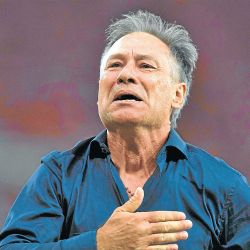 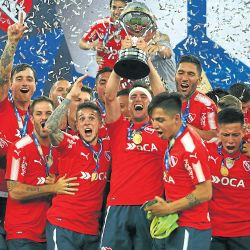