Defending champions River Plate are through to the Copa Libertadores final, progressing thanks to a 2-1 aggregate win over their arch-rivals Boca Juniors after a hard-fought Superclásico.

The Millo were made to work for it at La Bombonera in the second leg of the semi-final, with Boca's 1-0 victory on the night not enough to save them elimination after River won the first tie 2-0.

Jan Hurtado scored the only goal of the match after 80 minutes, scrambling the ball over the line from close range after a knockdown from Lisandro López.

There was little quality on show and River were clearly restricted from performing at their best by an industrious Boca side, but the hosts were unable to create good-quality chances and didn't score the first of two goals they needed on the night to draw the tie level until the 80th minute.

The Millo will now be hunting their fifth South American crown in a one-off final against Brazilian opposition in Santiago on November 23. It's their second in a row and seventh Libertadores final overall.

Flamingo face Grémio tomorrow night at the historic Maracanã Stadium in Rio de Janeiro in the other semi-final. Both sides are level 1-1 after the first leg.

The game kicked off 15 minutes late due to a large amount of paper on the pitch, which had been thrown out by the home fans, sparking ridiculous scenes of workers with leaf-blowers attempting to move the paper from the turf.

Another defeat to their arch-rivals is a bitter blow for the Xeneize – River, of course, defeated them in last season's relocated final in Madrid to clinch the cup. Before the second leg of the 2018 final, River fans threw rocks at a bus with the players of their rivals and hurt several of them hours before the match. The decider was transferred to Madrid because of the attack.

Boca are also sick at the sight of River coach Marcelo Gallardo, who has won seven international titles since he took charge in 2014, including two Libertadores, and defeated the Xeneize in their last five ties in cup competitions.

With Preisdent Mauricio Macri, the club's former president, reportedly watching on from home, Boca switched up from their normal style to adopt a more adventurous approach, fielding Ramón 'Wanchope' Ábila upfront with Carlos Tevez and Eduardo 'Toto' Salvio off the target man.

They attacked repeatedly but to little effect, looking more dangerous from set plays. Coach Gustavo Alfaro had promised they would attack, but River, well organised and drilled in defence, offered up few opportunities to their rivals.

The closest Boca came to scoring in the first half was a sliced clearance from Enzo Pérez while defending a set piece, which was pushed over by goalkeeper Franco Armani.

As the time ticked down, Alfaro went for broke, removing Ábila, Agustín Almendra and Alexis Mac Allister, with Mauro Zárate, Sebastián Villa and Jan Hurtado. The 19-year-old had a quick impact, scoring Boca's first as their fans' hearts began to soar.

River, with Gallardo setting them up far more conservatively than ever before, blinked and the coach threw on this own goalscorers, Lucas Prado and Ignacio Scocco, hoping they may carry a threat on the break.

Time continued ticking though, and soon, it was too late for Boca. For their fans, who cheered and applauded their team's efforts, the worst was to come. The final whistle blew, River's players were celebrating on the turf and the Xeneize dream of revenge for Madrid was over. River march on.

"We are a team that knows how to play in adverse conditions. Today we could not develop our own conditions and we had to fight," Gallardo told the press afterwards. "To reach a Copa Libertadores final you have to know how to suffer."

Alfaro believes his team deserved to take River to a penalty shoot-out.

"We searched for our goal at all times, we took risks. Now we feel this result was unfair," he said.

New league season gets into the swing of things 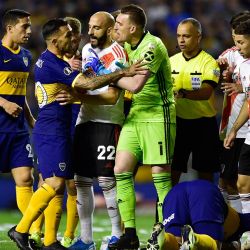 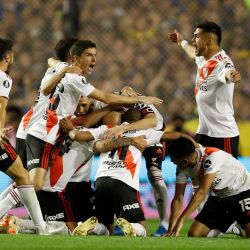 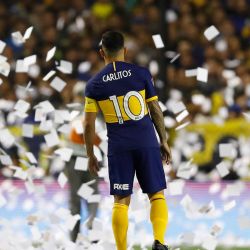 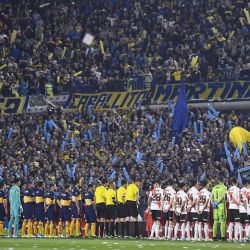