If they give us a chance, we are going to be great hosts Argentine President Mauricio Macri said during the announcement at the Case Rosada.

Argentina, Uruguay and Paraguay will form a joint bid to host the centenary World Cup in 2030, the presidents of the three countries confirmed on Wednesday.
"If they give us a chance, we're going to be great hosts," Argentine President Mauricio Macri said during the announcement at the Case Rosada. "We're going to organise a great World Cup because there's plenty of passion for football  in this region of the world."
Macri said the three countries are looking into "six or eight" stadiums in Argentina and "two or three" stadiums in Paraguay and Uruguay.
Uruguay staged the first World Cup in 1930 and had long been expected to seek hosting rights with Argentina.
Uruguayan President Tabaré Vázquez said the idea of a joint bid followed a visit by Macri to Montevideo in January 2016.
"The subject came up and, after just over 40 seconds of talking about it, we had agreed on the possibility of an Argentina-Uruguay bid," he said, adding that the possibility of bringing Paraguay into the bid came later.
"We think we deserve it because it marks 100 years from that historic milestone," Vazquez said. But he declined to answer reporters' questions about the costs of hosting the tournament or concerns about the possibility of stadiums becoming so-called white elephants if not managed properly.
Paraguayan President Horacio Cartes had said in August that his country would join the shared bid by neighbours Argentina and Uruguay, which hosted and won the inaugural World Cup in 1930. Cartes met with his Argentine and Uruguayan counterparts on Wednesday to finalise the announcement.
Bidding is not due to open for at least another four years, but the South American bid is already expected to face tough competition for the hosting rights of a tournament that will likely feature 48 teams. European soccer federations will be eligible to bid, with an option that could unite England and other British members of FIFA, while China is also expected to express interest in hosting the tournament.
"The first meeting (for the bid preparation) will be organised in the first week of November," Cartes said.
"Other countries are going to want to host but there is a very strong argument in favour of Uruguay, which will celebrate 100 years" since it staged the first World Cup, he said.
South America last hosted the World Cup in Brazil in 2014. Any bid for 2030 is likely to face stiff competition from the Asia region, where China is expected to be the front-runner to stage the finals.
The next World Cup takes place in Russia, with Qatar staging the event in 2022.
A joint United States-Mexico-Canada bid is the favourite to host the 2026 tournament, with only one other country, Morocco, having entered the bidding race.
The 2026 World Cup will be the first to feature 48 teams with the competition set to expand from its current 32-team format.
Infantino: "Argentina must do more." FIFA president Gianni Infantino asked Argentina to "do more" for football aside from producing star players like Lionel Messi on Wednesday, as the country announced a joint bid for the 2030 World Cup with Paraguay and Uruguay.
"The Argentine Football Association can do a lot for football and not just with the players on the pitch, with Messi and all his teammates," Infantino said after the meeting at the Casa Rosada.
"Argentina has had a bad time in recent years, at an administrative level, like others in the continent and outside the continent, like FIFA," the Italian added, in reference to the corruption scandal that shook the football world in 2015.
Three former presidents of South American football's governing body CONMEBOL were detained or put under house arrest in the wake of the scandal, as well as several national federation bosses.
The new CONMEBOL administration, in place since January 2016, has had its reforms hailed by audit firms and FIFA.
Infantino said that Argentina must "be an example" by putting "heart, strength and passion into it, to start working seriously for the sport, with a new, stronger FIFA, with a new, stronger CONMEBOL.”
- TIMES/AFP/AP 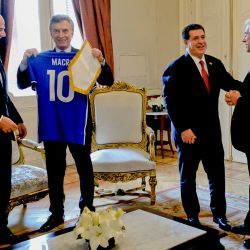 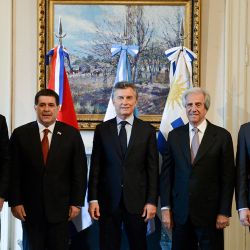 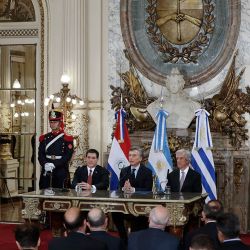