Organisers expect up to 1.2 million people to attend the open-air masses Francis will give in Santiago, Temuco (in the south) and Iquique (in the north).

Three Catholic churches in Santiago firebombed on eve of departure to Latin America, while child-sex abuse allegations and scandals make the headlines.

If the hype and controversy surrounding his upcoming trip to Peru and Chile is anything to go by, it is no wonder the Pope is still staying clear of his native Argentina.

Organisers of his visit to Chile and Peru, beginning on January 15, were scrambling last week to ensure security measures were tightly in place, even more so after three parishes in Santiago were attacked with homemade bombs in the early hours of Friday morning. Police discovered the bombs with a pamphlet threatening the 81-year-old Pope himself. “The next bombs will be under your robe,” one read. Nobody was reported injured and Police continued to investigate the origins of the threats. Unconfirmed reports, based on the pamphlets, linked the attacks to the countnry’s Mapuche community. Neighbouring Chile is gearing up for a huge security operation. Over 18,000 officers of Chile’s Carabinero police force are set to participate in police operations across the country.

Organisers expect up to 1.2 million people to attend the open-air masses Francis will give in Santiago, Temuco (in the south) and Iquique (in the north).

In Argentina, the Foreign Ministry – estimating that as many as 800,000 Argentines could travel to Chile – has called on travellers to remain calm in the face of likely delays at border crossings.

Francis’s trip begins in Chile and will end in Peru on January 21. An audacious pontiff, he is expected to address a number of hot topics involving the Church, particularly the historical mistreatment of indigenous communities and the sex abuse scandals that have plagued the Vatican for years.

His planned activities in the southern city of Temuco have prompted particular hype. There, he is expected to address the conflict between the authorities and the indigenous Mapuche community over disputed territory.

And on a number of ocassions he has addressed the historic mistreatment of indigenous communities by colonial powers including the Church.

Any olive branch toward the Mapuches is likely to provoke strong reactions because of the tensions surrounding the activities of minority militant groups who have led violent protests and attacked private property, including churches.

In Santiago, the Pontiff is scheduled to meet outgoing president Michelle Bachelet whose second presidency brought her into direct conflict with the Church over the legislation of same-sex marriage and less restrictive abortion laws.

Francis will visit Peru from January 18. There, a political crisis is well under way after embattled president Pedro Pablo Kuczynski pardoned convicted human rights abuser, former dictator Alberto Fujimori, in exchange for opposition votes in an impeachment process that would have seen him booted from office.

Aside from in-demand photo- ops with the leader of the world’s largest religion, in Peru the Pope will also have to contend with a scandal closer to home. The Vatican last week intervened in the management of a controversial local Catholic group whose leader is accused of psychically and pscyhologically abusing his members.

Luis Figari, the leader of Sodalitium Christianae Vitae, a conservative movement with around 20,000 members across the Americas, was removed from his post after the Vatican assigned a commissioner to take charge of its operations.

Local prosecutors are seeking his arrest on allegations he sexually abused and humiliated members of his congregation. In a statement, the Vatican said Francis had followed the Sodalitium saga for years, had asked that the congregation pay particular attention to it and was “particularly concerned about the seriousness of information about the internal regime, the training and financial management.”

Meanwhile in Chile, fresh revelations about the sex-abuse scandal there are likely to flame tensions which are set to include protests. The online database BishopAccountability.org released research showing 78 priests or members of religious orders had been credibly accused or convicted in Chile.

A letter obtained by the Associated Press and published on Thursday also revealed details of Francis’ behind-the-scenes manoeuvring to deal with prelates connected to Chile’s most notorious paedophile priest, Reverend Fernando Karadima. It addresses the concern of local bishops about Francis naming a Karadima protege, Bishop Juan Barros, to the helm of the diocese of Osorno.

Francis, who once studied in Chile and visited Peru as a Jesuit seminarian, has avoided visiting his home country Argentina citing political tensions. Yet the proximity of the visit has sparked debate once again over why the man formerly known as Jorge Mario Bergoglio has not scheduled a trip home. Many observers claim the Pope’s words carry particularly strong implications in Argentina where they are regularly interpreted as political or partisan interventions, against the government of President Mauricio Macri.

Francis last year said that the date for any visit to Argentina was in God’s hands.

This week, the Argentine Synod released a statement expressing concern about the tendency of some to speak in the name of Pope Francis or to interpret his words in a slanted way so as to aggravate divisions among Argentines. Nobody spoke in the Pope’s name other than his Vatican official spokesmen, the bishops underlined.

Meanwhile, Bishop Santiago Olivera, the chief military chaplain, this week revealed that between 1975 and 1979 at least 127 of the children born to mothers who subsequently disappeared in the ESMA concentration camp and then illegally adopted, had been baptised in thenavalengineeringacademy’s chapel (now named after the late Irish ex-priest Patrick Rice, a human rights activist). Olivera divulged this information following an audience with Pope Francis, who authorised him to speak out. 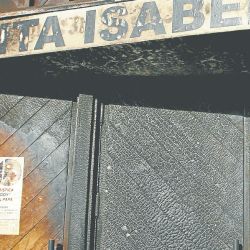 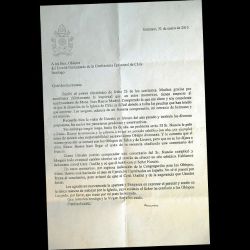