Peace demands ‘the commitment of everyone,’ Francis tells nation in pointed reference to sceptics of FARC, ELN deals.

Pope Francis appealed to Colombians to reject “vengeance” for the sufferings of their near half-century civil conflict and promote forgiveness to overcome lingering resentments as the country seeks lasting peace.

Cheering crowds greeted the 80-year-old Argentine pontiff this week as he prayed for the country to heal the wounds of war – though some warned that forgiveness was hard after so much violence.

Francis spoke alongside President Juan Manuel Santos, who has overseen a controversial peace deal with the Revolutionary Armed Forces of Colombia (FARC) and a ceasefire with the last active guerrilla group, the National Liberation Army (ELN), declared just last week.

“The steps taken give rise to hope, in the conviction that seeking peace is an open-ended endeavour, a task which does not relent, which demands the commitment of everyone,” Francis said. “May this determination help us flee from the temptation to vengeance and the satisfaction of short-term partisan interests.”

Santos won a Nobel Peace Prize last year for his part in the accord that has seen the FARC disarm and transform into a political party. It was a key step toward ending a many-sided territorial and ideological conflict that has left 260,000 people confirmed dead, 60,000 unaccounted for and seven million displaced.

But the peace process has been fraught with division. Critics say the FARC rebels got off too lightly, with amnesties and alternative sentences.

“This process is a lie... I believe in God, but I do not need intermediaries,” said Bogota resident Luis Eduardo Martínez, 63, commenting on the pope’s visit. “We who saw so many victims die have not lost our resentment. I hope God will allow me to let that resentment go, but it is still there.”

In a balcony address later to crowds of young people near Bogotá’s cathedral, Francis urged them to “dream big” for the country’s future.
“Your youthfulness... makes you capable of something very difficult in life: forgiving. Forgiving those who have hurt us,” he said.

Divisions. Francis last year tried unsuccessfully to mediate between Santos and the lead opponent of the FARC accord, conserva
tive leader Álvaro Uribe.

The former president wrote a Twitter message welcoming “His Holiness Francis” to Colombia on Wednesday, but without commenting on the peace process. Uribe, a fierce opponent of the peace deal, had written a letter to the pope a day earlier expressing concern that the deal with the rebels had fuelled a rise in drug-trafficking and created economic uncertainties with the potential to destroy Colombia’s social fabric.

FARC leader Rodrigo “Timochenko” Londoño welcomed the pope on Thursday, tweeting his thanks to Francis “for supporting the peace and defending social and environmental justice.”

Colombians narrowly rejected the accord in a referendum last year. But a reworked version was later pushed through Congress.

Santos thanked Francis for coming to “encourage us to take the first step toward reconciliation,” in a speech alongside the pope on Thursday.

“There is no use in ending a war if we still see each other as enemies,” Santos added.

The highlight of Francis’ trip came yesterday with a meeting and prayer of reconciliation between victims of Colombia’s conflict and former guerrillas in Villavicencio, a city south of the capital surrounded by territory long held by the FARC.

Francis beatified two Colombian priests killed during the decades of guerrilla warfare, declaring them martyrs who were killed out of hatred for the Catholic faith, with the Vatican emphasising the trip’s focus on forgiveness. 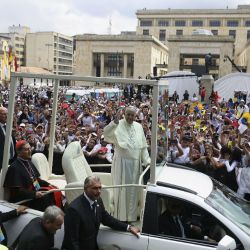 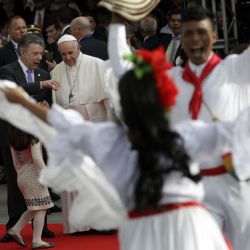