Faced with violent protests and political chaos, Peru’s besieged Congress chose a US-trained engineer and systems analyst to be the nation’s president – the third in less than a week – in a bid to restore some measure of calm.

Lawmakers on Monday voted in Francisco Sagasti, an elder-statesman legislator with extensive consulting experience at home and abroad to lead a new government by electing him head of congress.

Sagasti, 76, who has a doctorate from the University of Pennsylvania, is a former head of strategic planning at the World Bank and a one-time adviser to the United Nations on science and technology. Although he’s been a lawmaker only eight months, he’s seen as a conciliatory figure and corruption-free in a fractured and volatile congress, half of whose members have been accused of a crime.

After being sworn in, Sagasti said he’d seek to heal an anguished nation through fairness and justice.

“The protests were a powerful wake-up call,” he said. “The pandemic, the economic crisis, the problems with security weren’t enough. We had to wait for the death of two young men to realize the ignominy of the situation we’re living in.”

“For a long time he’s dreamed of becoming president,” said Miguel Jaramillo, a researcher at the Lima-based Grade think tank, which Sagasti co-founded. “He’s better qualified for the post than anyone else in Congress and better placed to convince competent technocrats to take over public administration until next July.”

Merino, his Cabinet chief and interior minister are now under investigation by the Attorney General's Office for the two deaths and abuse of authority.

As head of Congress, Merino led the impeachment of Vizcarra, one of the most popular politicians in the country, in what many saw as a naked power grab. Vizcarra had the backing of much of the nation but butted heads with the legislature – his party has no members in it – in a dynamic that has paralysed Peruvian politics.

Sagasti’s Purple Party is the only one in Congress to have voted squarely against Vizcarra’s ouster.

Sagasti has opposed congressional economic proposals considered dangerous by the government, such as a large cash payout from the state retirement fund. He was on the ticket with a leftist lawmaker, Mirtha Vasquez, who’ll become acting head of congress.

Peru has long been a paradox – wild politics and endless corruption allegations but solid economic and market opportunities. The coming and going of numerous presidents has rarely affected investment basics.

But on Monday, its currency, the sol, declined to a record low. It and other assets will respond positively to Sagasti’s appointment, according to David Tuesta, who served as the nation’s finance minister in 2018.

“He was the best choice from this very precarious Congress,” Tuesta said. Still, “market volatility will remain until the Cabinet is known.” 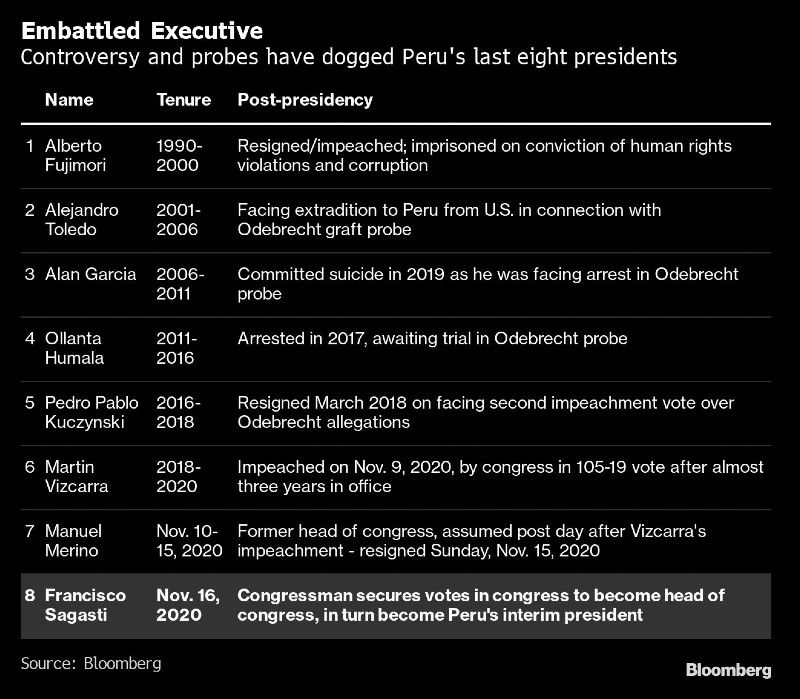 Others said the selection would strengthen institutions shaken not only by this infighting but by Covid-19 and the deep economic challenges it has brought to Peru.

“Francisco won’t do anything to jeopardise a democratic transition,” said Carlos Penny, a veteran banker who taught at Universidad del Pacifico at the same time as Sagasti. “I think he’ll be cautious in making sure the process is smooth. He’s a thoughtful person, who’s not impulsive.”

Jo-Marie Burt, a Latin America specialist at George Mason University, said what happened in the past week reflected the raw nature of Peru’s politics. Vizcarra had sought reforms, including term limits and an end to parliamentary immunity, that many in congress found threatening.

“There is a coalition in Congress that act on their very personal, private interest to maintain their seats in parliament, their parliamentary immunity, to be able to run in the next government and keep access to government funds,” she said.

She added, “Peruvians understood what was going on and protested massively. They want to put an end to this conspiracy of ‘to the victor goes the spoils.’”

The speed with which Congress installed a new president was an indication that its members understood the public was feeling betrayed and furious. Demonstrations continued on Monday throughout the voting.

Nicolas Urrutia, a senior analyst at Control Risks, put it this way: “When you boil it down to its simplest elements, you have a very unpopular congress led by a second or third degree politician that ousted the most popular head of state in 20 years.”

In his statement after being sworn in, Sagasti made clear that the divide between Congress and the people had to be bridged. He said the “country wants to be recognised and to be able to say ‘that congress represents me.’”

After the ceremony, Sagasti went outside to the street in front of Congress to wave, and hold up a clenched fist to demonstrators. He’ll be sworn in as interim president on Tuesday afternoon.

Speaking to journalists, he added, “It’s not a time for celebration. We have too many problems and difficulties. It’s a moment of reflection to ask ourselves where we lost our way, to correct and advance decidedly.”