At a recent rally in Lima, hundreds jostled to catch a glimpse of Pedro Castillo, the school teacher and union organiser who pulled off an upset to make it to the run-off for Peru’s presidency.

Supporters chanted “No more poor people in a rich country,” as they waved an image of Túpac Amaru II, the indigenous leader who fought against Spanish domination almost 250 years ago and who has inspired revolutionary movements across the region ever since.

Castillo’s jubilant backers can barely believe that the son of illiterate Andean peasants has reached the June 6 second-round vote on a platform that amounts to taking up the historic struggle to liberate the oppressed. Investors are shocked for different reasons, recoiling at the prospect that Castillo and his Free Peru party — founded by a Marxist — seem prepared to tear up decades of market-friendly consensus.

“He came from nothing and now he’s on the verge of being president,” said Miguel del Castillo, a friend and adviser who’s not related to the candidate. “The Peruvian miracle exists.”

Left-winger Castillo polling ahead of Fujimori for Peru presidency

In reality, Castillo’s rise is a consequence of the political upheaval sweeping Latin America as it’s battered by one of the world’s deadliest waves of Covid-19 and an economic crisis that has exposed and exacerbated long-standing inequalities.

The seeds of Peru’s revolt were sown during 20 consecutive years of economic growth that pulled millions out of poverty and established the country as a relative safe haven in a turbulent region, at least until the pandemic hit. An economic slump of 11 percent last year focused attention on the fact those gains haven’t been evenly distributed. Perversely, some of the country’s most mineral-wealthy provinces — rich with copper, gold, silver and zinc — are also its poorest.

The result has been to accentuate the divide between a wealthier, Spanish-speaking capital and the impoverished countryside, where much of the population speaks the indigenous Quechua language. As classes moved online, for example, many students in rural areas didn’t have Internet access. It is that latter constituency where Castillo has built his base. Wearing a straw hat and carrying an over-sized pencil to stress his focus on education, Castillo, 51, promises to forge a country that works for everyone, not just the capital elite.

“People see that all the natural resources are in the countryside but all the benefits are concentrated in Lima,” said Maritza Paredes, a sociology professor at the Pontifical Catholic University of Peru. “Castillo has been able to capitalise on it.”

Castillo’s programme is as ambitious as his lack of government experience is daunting. At the center of his strategy are plans to force multinational corporations, particularly the mining companies that are the backbone of the economy, to leave more of their profits in Peru. He wants to promote rural development, plow 20 percent of economic output into education and healthcare and shut down private pension funds. His flagship proposal is to rewrite the Constitution crafted under ex-president Alberto Fujimori, a document he says prioritises business interests over “human rights” like public housing and organised labour. 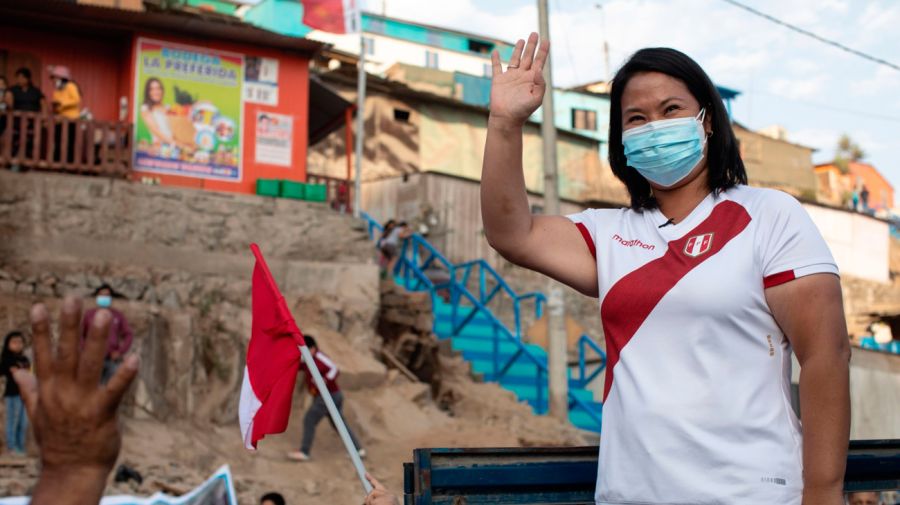 Castillo’s rival in the run-off, Keiko Fujimori, is at the other extreme of the political spectrum. The former president’s daughter, she is one of Peru’s best-known politicians and one of the most controversial: Her father is in jail and she’s running her campaign while out on bail facing money-laundering charges.

The final polls released over the weekend suggest the race is too close to call, an indication of how polarised the country has become. Peru has churned through three presidents in the last seven months and rampant corruption has undermined faith in a political class tainted by decades of presidential impeachment, imprisonment and criminal investigation.

Castillo appeared on course for victory until just a week ago, when polls narrowed in the wake of the murder of 16 people in a rural, cocaine-producing region. What took place remains unclear, but the military blamed the massacre on the Shining Path terrorist organisation. While both candidates condemned the attack, the race may be influenced by Fujimori’s tough stance on security and the fact that Castillo’s party has repeatedly been accused of having connections to remnants of the Maoist guerrilla group.

During the campaign, Fujimori used that line of attack, calling him “a car bomb” who would “explode the last 30 years of development into a thousand pieces.” Castillo denies any ties to the group, and said his government would pour more money into the police department “to determine the real causes of these attacks.”

The incident was another jolt to a tumultuous race. Castillo’s first-round victory on April 11 sent stocks and bonds tumbling.

A week before the vote, polls had him in sixth place; in the event he beat out 17 other candidates. On election night CNN didn’t have a stock photo of him to broadcast. Speaking to reporters the morning after his win, even Castillo seemed unprepared: “I just fed my chickens their corn and need to check on the cattle,” he said of his post-election schedule.

The third of nine children, Castillo started out teaching in Anguía, one of Peru’s poorest villages.

Nilver Herrera was a student of Castillo’s and then followed him into a rural self-defence force known as “Rondas Campesinas.” Created to hunt down cattle and chicken rustlers, the group fought guerrilla organisations in the 1980s and is known for building schools and wells in areas neglected by the central government.

After gaining a Masters degree in education, Castillo became active in the teachers’ union. In 2017, he led a strike for higher pay and the repeal of laws that would have de-certified many rural, poorly trained teachers, bringing him to national attention.

Yet Castillo’s true political leanings seem to be a work in progress. Early on in the campaign he parroted the talking points of his party’s Marxist founder, Vladimir Cerrón. More recently, he has sought to distance himself from the party’s more radical ideas.

Kurt Burneo, a former deputy finance minister touted as a possible presidential economic adviser, said Castillo reminds him of Ollanta Humala, who won the presidency in 2011 campaigning as a “21st Century Socialist,” only to turn moderate in office.

“When you look at Peruvian history, it’s not unusual for someone to campaign on the left and govern from the right,” said Burneo.

If so, that will be hard to balance with the expectations of Castillo’s supporters — people like Elias Quispe, 49, a construction worker who said he’s backing Castillo because the political class sold off the country to foreigners and big corporations.

“They take our country’s riches and don’t even pay taxes,” he said. “We the common people, we’ve never benefitted.”