Wealthy businessman Rodolfo Hernández and leftist hopeful Gustavo Petro are technically tied in voting intentions ahead of Colombia's June 19 presidential run-off, according to a poll released this week.

The poll, which interviewed 1,200 people, has a margin of error of 2.8 percent, leaving the two candidates technically tied, it added.

Petro, a 62-year-old senator, ex-Bogotá mayor and former guerrilla, topped last weekend’s national ballot with 40 percent of the vote and will face his rival in a run-off vote later this month.

Hernández, an eccentric former mayor of Bucaramanga whose entire programme is based on the fight against corruption, was the fastest-growing candidate in the final stretch of the presidential race and pushed right-wing candidate Federico ‘Fico’ Gutiérrez into third place.

With opposing visions of change, both Hernández and Petro are considered to be anti-establishment politicians who embody a pushback against the elites that have historically governed the country of 50 million.

Since the first round, Hernández has received the backing of the right and other traditional parties for the ballot, creating a sort of "anti-petrista" front that could take him into power.
Petro, who would become Colombia’s first left-wing president if elected, is garnering support in dribs and drabs from the centre.

Without a party backing him or a clear ideology, Hernández has managed to garner attention via videos on TikTok that slate the ruling class and lash out at the squandering of public resources. He has never been seen on a platform and has already announced that he will not participate in presidential debates.

Hernández, 77, is not on the political left, nor the right. He ran under the banner of the Anti-Corruption League, a young and marginal party with two seats on the 168-member Chamber of Representatives, Colombia's lower house of Congress.

Summits do not always reach a peak

The hopeful’s programme is described as inscrutable, but he has a reputation for calling out endemic corruption by Colombia's long-ruling political and economic elite.

Among his best known proposals: closing embassies to pay off student loans and making a visit to the sea at least once in a lifetime a right for all Colombians.

Hernández recently had to retract an expressed admiration for Adolf Hitler, explaining that he had actually meant to say "Albert Einstein."

"I don't think it was his policies that got him this strong vote, I think it was more his rhetoric and appealing to a lot of disenchanted voters who were very nervous about Petro, basically," said analyst Michael Shifter of the Inter-American Dialogue think tank.

Hernández's rhetoric has proved appealing at a time Colombians are reeling from high poverty and unemployment rates worsened by the coronavirus pandemic.

There is real anger at a sense of being abandoned by the government, as illustrated by mass protests last year that were violently suppressed.

"Also, he has a very colloquial way of connecting with people. He is not a member of the traditional elite using elaborate, complex, guarded language... Rodolfo speaks like the people, who understand what he is saying."

Hernández is himself under investigation for graft allegedly committed during his mayoral term.

Petro, fearing his campaign may have hit a hurdle he cannot overcome, is expected to turn his attention to young citizens who did not cast a vote last time out.
In an interview with W Radio on Wednesday, the 62-year-old accepted the "reality" that Colombia is divided between his candidacy and his rival’s, though he sought to underline the differences between them both.

Petro said that from now on he will focus on two "key points:" attracting his followers to the polls who did not vote believing that his victory was assured, and attracting abstentionist youth to the polls.

"The first results – we do not yet have more concrete information – show a high rate of abstention among the youth, as could be predicted given the traditional behaviour of young people, who are more abstentionist than older people," explained the candidate, who is backed by a coalition of left-wing forces.

In Sunday's election, abstention stood at 45 percent, slightly below the historical average.

"If young people turn out en masse to vote as happened in Chile ... the same thing could happen here," said Petro, who declares himself to be in agreement with the Chilean left-wing president, Gabriel Boric.

Petro based his campaign on rooting out poverty and inequality, and moving away from oil exploration – a major income generator for Colombia. Yet his chances, analysts say, would have been better if his right-wing rival had made the second round.

"He [Petro] would have been a lot stronger" against Gutiérrez in the second round, said Shifter.  "He would have benefited from a lot of people who are disgusted with politics as usual." 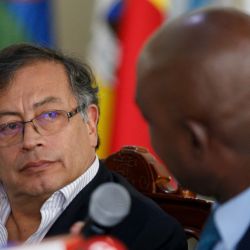 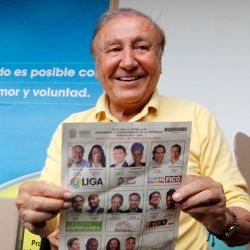