Output tumbled 1.3 percent in March, its worst reading in six months. In the 12 months through March, Brazil’s industrial production contracted for the first time since 2017, the national statistics bureau reported Friday.

Brazil’s economy has suffered with a disappointing recovery since emerging from recession two years ago. Record-low interest rates haven’t provided the hoped-for boost to the industrial sector, which since 2017 hasn’t once posted back-to-back months of growth. With the government fiscally strapped, a wave of private-sector investment is needed to accelerate growth, but confidence has wavered since Brazil’s President Jair Bolsonaro assumed power. Exports to Argentina are also down as the neighboring country sinks into recession.

The March industry data “definitely increases the risk” gross domestic product contracted in the first three months of the year, said Alberto Ramos, Goldman Sachs’ chief Latin America economist. Edward Glossop, Latin America economist at Capital Economics, added that the first-quarter data is “likely to be ugly” and it appears the economy may have posted a small contraction.

Swap rates fell across the board, with interest paid on the contract maturing in January 2020 dropping 2 basis points, as the weak economy suggests no scope for inflationary pressures.

The March plunge in industrial production was led by a two-percent decline in output of consumer goods, particularly due to a drop in vehicles as Argentina imports fewer cars.

From the same month a year earlier, overall output fell 6.1 percent, the most since last May’s trucker strike ground the economy to a halt. The effect of the Brumadinho dam disaster in January continues to weigh on the mining sector, with output from extractive industries down 14 percent year-on-year, according to Andre Macedo, who coordinates the survey. 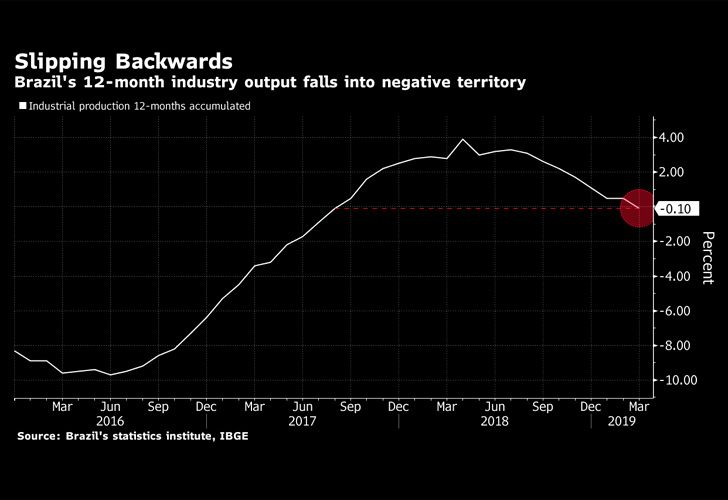 Alberto Fernández to visit Chile's Piñera in Santiago this month

Bolsonaro government’s message to Biden: Trumpism lives on in Brazil

Abortion becomes legal in Argentina as Chile starts a debate

by by David Biller, Bloomberg