Overhauling the bloated public pension system has been a ubiquitous topic among Brazil investors for years now, the change nearly every money manager would cite when asked what the country needed most. Now that it’s finally here, traders seem to want a whole lot more.

The revamp, which is expected to save the government almost 1 trillion reais ($266 billion) over the next decade, has mostly been priced into local assets, with the currency, stocks and bonds all among the world’s best performers this year.

For further gains to take hold, investors want to see interest-rate cuts, a rebound in economic growth and further progress in government efforts to shore up the economy. Measures including rewriting the tax code to privatizing state-run companies are in focus.

“The pension reform is like a gate. It has to pass for the gate to open,” said Jan Dehn, Ashmore Group Plc’s London-based head of research. “Without pension reform Brazil’s outlook is unsustainable. With it, the economic cycle can begin to recover.” 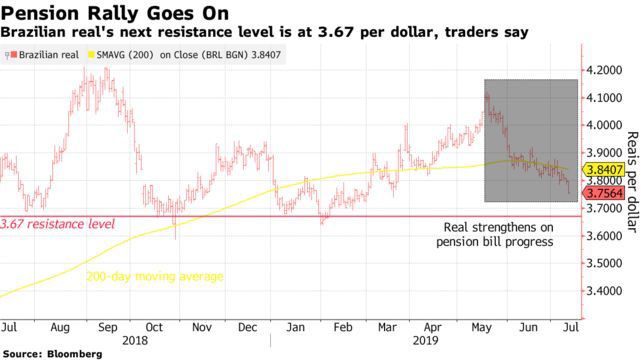 The effort to cut benefits for retirees, which proponents said was needed to shore up Brazil’s fiscal accounts, was marked by countless setbacks, delays and fierce pushback. The topic itself has been around for decades: Adriana Dupita, who covers Brazil and Argentina for Bloomberg Economics, recalls heated debate about it back when she started working as an economist in 1996. The never-ending cycles of debate made it a “Groundhog Day’’ for Brazilian analysts.

Brazil came close to pushing through the reform two years ago, with then-President Michel Temer almost done gathering enough support to put the bill to a vote when accusations of corruption rocked the government and buried any chance for the legislation.

The version proposed by President Jair Bolsonaro has been in the works since February, plodding through the procedural steps before reaching the lower house floor for the first of two required votes. Late on Wednesday, 379 lawmakers voted in favor of the base text of the bill, way more than the 308 needed. While the reform still faces a number of legislative hurdles before becoming law, including amendments that could sap its strength, it has now overcome its most challenging obstacle.

Ilya Gofshteyn, a senior emerging-market strategist at Standard Chartered in New York, says the approval should lure more foreign investors, who have been fleeing Brazil in recent years. He expects momentum from the bill’s passage will help Brazilian assets outperform for “about a month.”

This “will open the door for investors to turn their attention to other reform initiatives,” Gofshteyn said. “The privatization effort has gotten drowned out a bit in the noise surrounding pension reform, but should be an important driver of market sentiment going forward as well.”

The Ibovespa stock index has repeatedly reached new records, mostly driven by local investors. While Brazil’s benchmark equity gauge is up 20% this year, foreign investors have pulled 5 billion reais out of the country’s stocks, according to the latest data available. That adds to a net outflow of 11.5 billion reais in 2018, the biggest yearly withdrawal since the global financial crisis.

With the optimism around the pension reform mostly priced into the currency and rates markets, stocks are widely seen as the best asset to ride a new leg of the rally. Strategists surveyed by Bloomberg see the Ibovespa poised for an additional gain of as much as 16% this year.

That may explain why an exchange traded fund that tracks the MSCI Brazil Index on Thursday extended its winning streak to the longest since February 2018 in British pound terms, but the nation’s dollar bonds due 2029 were little changed.

Giovanna Musa, the head of equities at Zurich Asset Management in Chile, who helps oversee $1.4 billion, says she would need to see either a pickup in economic growth or additional government measures to bolster the economy before she would add to her position.

“Focus will continue on additional measures,” she said. “This is key -- there is more to come in Brazil after the pension reform approval.”

Venezuela's Maduro hopes for 'better relations' with US under Biden