Argentina’s overseas bonds careened toward 40 cents on the dollar after President Mauricio Macri asked creditors for more time to repay them amid a growing economic crisis.

The notes reached a record low and some Argentine mutual funds suspended redemptions hours after Macri’s advisers laid out a series of desperate measures to try to lighten the debt load. They will force investors in short-term notes issued in the local market to accept longer maturities; they want foreign bondholders to “voluntarily” push out maturities; and just a year after getting an International Monetary Fund bailout, they will plead to delay repayments on the US$44 billion received under the programme.

The moves seek to shore up the currency and avoid yet another default by a country that has earned a reputation as a serial defaulter over the past century. (Back in 2001, Argentina hit creditors with the biggest default in history, halting payments on US$95 billion of bonds.) And yet by forcing holders of local debt into longer maturities, officials are skating very closely to the broad definition of default.

“It now looks like a disorderly phase of a debt restructuring with a piecemeal strategy of seeking debt relief without a comprehensive debt repayment plan,” Siobhan Morden, the head of Latin America fixed income strategy at Amherst Pierpont Securities, wrote in a note. “Capital controls could quickly follow.”

International, dollar-denominated notes due in 2028 fell 3.2 cents to 39.9 cents on the dollar. The extra yield investors demand to hold Argentine government debt over US Treasuries widened 214 basis points to 22.9 percentage points, the highest since a debt restructuring in 2005. After initially weakening, the peso gained 0.7 percent to 57.7 per dollar.

With the economy mired in a deep recession, the peso in freefall, inflation soaring and most investors unwilling to roll over short-term debt, Macri had little choice but to take drastic measures in the run-up to an election he will almost certainly lose. A primary held earlier this month – which acted as something of a dry run for the actual October 27 vote – triggered the deepening of a year-long financial crisis when it showed that Macri, a free-market advocate, was trailing the Peronist candidate Alberto Fernández by a wide margin.

The verdict from investors was swift: Stocks, bonds and the peso all tumbled, sending the benchmark equity index down 48 percent in dollar terms in one day alone. The losses have kept piling up. Swaps traders see a 92 percent chance of the country defaulting over the next five years.

It’s unclear how successful Macri will be with his bid to ratchet back the financial pressure his administration faces after foreign-currency reserves plunged US$10 billion over the past month. The government is seeking to reprofile a total of US$101 billion of debt – US$7 billion of payments on short-term local notes held by institutional investors, $50 billion of longer-term debt and the obligations owed to the IMF, Economy Minister Hernán Lacunza said.

Fernández’s camp, after initially saying officials would respond to Macri’s plan Thursday, later said there were no plans to offer a comment “for now.”

“While we think the short-term funding needs have been addressed, political uncertainty remains high,” analysts from Citigroup Inc. wrote in a note Wednesday. “Any proposal on global bonds could be unwound by the potential new administration.” 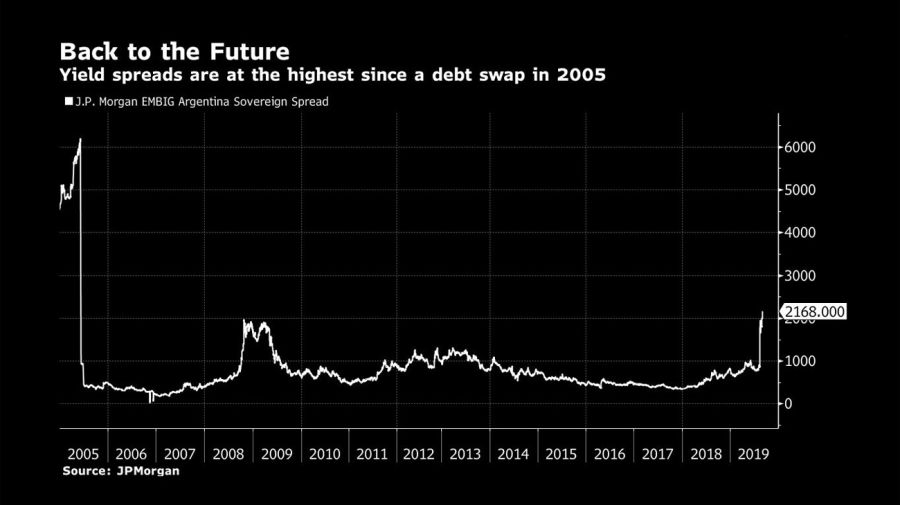 Several mutual funds invested in short-term debt, including funds run by Santander Asset Management and Galileo Argentina, told regulators that they won’t allow clients to withdraw money for the time being as they monitor the effects of the government’s plan.

The major credit rating companies didn’t have an immediate comment on Macri’s plan. But Argentina, by signalling that individual investors will be treated differently than institutional counterparts, is essentially acknowledging that this won’t necessarily be a friendly debt reprofiling. Argentina is currently rated CCC by Fitch Ratings and B- with a negative outlook by S&P Global Ratings.

Macri took office less than four years ago amid a wave of optimism among investors that South America’s second-largest economy finally had a leader who understood business. He settled creditor lawsuits that had dragged on more than a decade and returned to global capital markets with a splash, selling bonds that wouldn’t mature for 100 years.

But he soon ran into one problem after another, from persistent inflation he couldn’t tame to a global trade war, that thwarted his free-market goals. An expected economic surge never materialised, leaving the government with a debt load that’s now too big for it to handle.

Macri spoke Thursday morning to call for cooperation and dialogue with the opposition and said his government is addressing the debt issue.

Argentina raises key interest rate to 69.5% in biggest hike since 2019

The fear among investors now is that the December 10 inauguration will usher in a return of the policies championed by former president Cristina Fernández de Kirchner, who is running for vice-president under her former Cabinet chief Fernández. Her tenure was marked by a contentious relationship with investors over policies including currency and capital controls, price freezes and nationalisations.

Fernández has sent mixed signals to the market. One day vowing to never default if elected president and staking a claim to be against currency controls, while another criticising the IMF and dismissing the idea of trying to calm investors before the election.

Lacunza, the economy minister, lamented Argentina’s long history of political and economic turmoil, noting no administration that wasn’t affiliated with the populist Peronist movement has finished its allotted term in almost a century.

“That’s a collective failure of political leaders, not of citizens,” he said. “For 91 years we’ve owed our people, who watch as we gamble with their peace of mind, that sense of normality.”