Iceland has the best pension system in the world, according to a global study that shines a light on how nations are preparing their ageing populations for retirement.

The country took the top spot in the published Tuesday, drawing praise for being well governed and providing strong benefits to retirees, including a generous state pension. The Netherlands and Denmark came in second and third respectively after holding the top spots for the past decade.

The scores of 11 countries including India and Korea slipped this year as the world battles to limit the economic fallout from the Covid-19 crisis. The current economic environment with reduced wage growth, historically low interest rates and shrinking returns in many asset classes, is placing additional financial pressures on existing retirement income systems, the report said. 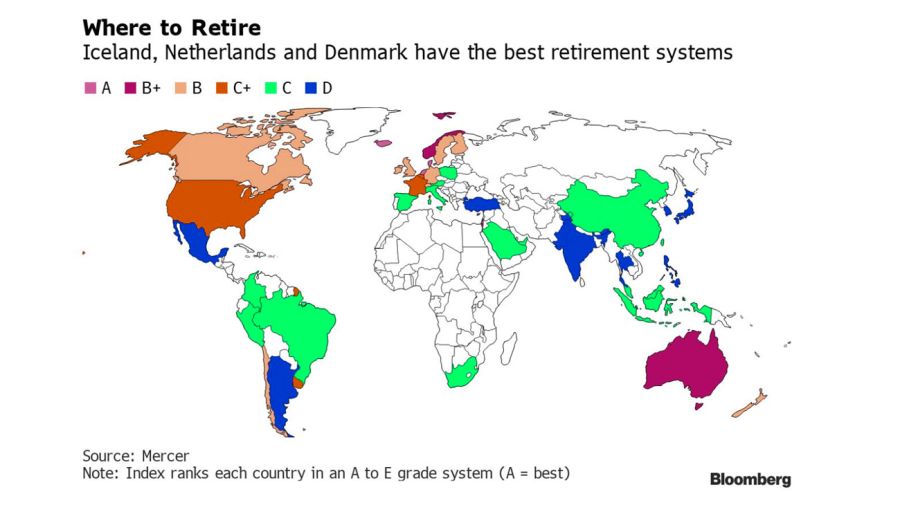 In the survey of 43 nations, Thailand was ranked last, followed closely by Argentina and the Philippines due to their systems having “major weaknesses and/or omissions that need to be addressed.”

The United Kingdom and China, ranked 9th and 28th respectively, showed the most improvement on last year as a result of significant pension reform, according to the report. The United States, at 19th, could increase its score if it raised the minimum pension for low-income retirees, it said.

“Despite the challenges, now is not the time to put the brakes on pension reform – in fact, it’s time to accelerate it,” said David Knox, senior partner at Mercer and lead author of the report.