Axel Kicillof relished the role he played in the Argentine government years ago: the brash left-wing economy minister who clashed at every opportunity with foreign investors. They hated him and he loved it.

Today, Kicillof is once again locked in a bruising battle with financiers in New York and London. This time it’s as governor of Buenos Aires Province, which, along with nearly a dozen other regions, called for debt restructuring talks last year as the federal government began negotiations of its own with creditors. But unlike the others, Buenos Aires Province has yet to emerge from default. In fact, 10 months after Kicillof halted payments on US$7.1-billion worth of bonds, barely any progress has been made in talks.

With the bonds now languishing at just 35 cents on the dollar in secondary markets and not a penny of interest income flowing their way, creditors are growing tired of the stalling and the disinterest displayed by Kicillof’s aides. Last week, funds from the Buenos Aires Ad Hoc Bondholder Group sued the province in a US court for unpaid principal and interest.

This gambit, analysts say, may help jump-start the process by forcing the province to take a more active role in negotiations. But, they warn, there’s another dynamic at play that threatens to only embolden Kicillof to further radicalise his hard-line approach. The federal government – under the growing influence of Vice-President Cristina Fernández de Kirchner, a mentor to Kicillof – is aggressively pushing for concessions to refinance a US$45-billion failed programme with the International Monetary Fund.

The government’s newly restructured sovereign bonds, like the defaulted Buenos Aires bonds, now trade below 40 cents on the dollar, a reflection of how badly the country’s economy and finances have been battered by the pandemic and lack of credibility.

“For Kicillof, this is political,” said Diego Ferro, founder of M2M Capital in New York, a veteran debt investor who doesn’t hold bonds of the province. “Which means that unless he gets a deal consistent with what Argentina got, it will reflect poorly on him.”

And as August primaries and October mid-term elections get closer, politics will play an ever larger role in shaping all aspects of policy. Cutting a deal with the IMF or provincial bondholders isn’t a priority, especially during a pandemic.

Buenos Aires Province has extended the deadline on its debt proposal no fewer than 13 times. But last week, the provincial government published details of a new one shown to New York-based hedge fund GoldenTree Asset Management, one of its largest creditors. It was swiftly rejected – as was the counteroffer.

The next day, the creditor group, including GoldenTree, submitted two legal claims against the province in the US District Court of New York seeking US$366 million in unpaid interest and principal.

“There’s definitely more pressure with the litigation now ongoing,” said Carlos de Sousa, an emerging market portfolio manager at Vontobel Asset Management in Zurich. “Kicillof is quite ideologically driven and close to Cristina. And thus his lack of cooperation with creditors until recently.”

Those who observed Kicillof as Economy Minister between 2013-2015 under then-president Fernández de Kirchner know that he doesn’t quickly surrender in high profile conflicts with creditors. Back then he battled Paul Singer’s Elliott Management and other holdouts, insisting that Argentina couldn’t comply with a ruling in their favour and eventually opted to default again with the president’s blessing.

And while he’s delegated negotiations this time around as governor to his provincial Economy Minister Pablo López, he’s very much involved.

The legal claims are only a strategy to pressure the government and the province will still have 60 days to respond, López said in an interview last week. While Kicillof, 49, doesn’t directly participate in conversations with bondholders, López frequently discusses the debt restructuring process with him, he said.

“He is focused and interested,” López said. “The debt negotiation is determined by the provincial government.”

The province is bigger than many countries and represents half of the debt from regional governments. Home to almost 18 million people and accounting for two-fifths of Argentina’s GDP, it’s a critical political battleground in any election.

Last week at an event, Fernández de Kirchner, who hand-picked Alberto Fernández as the presidential candidate in 2019, railed against the IMF and the terms being sought to renegotiate the largest credit agreement ever struck with the Washington-based lender. Bond prices fell.

“We can’t pay because we don’t have the money,” she said, with Kicillof nodding in the background. While they spoke, Economy Minister Martín Guzmán was wrapping up a trip to Washington after meeting IMF officials. 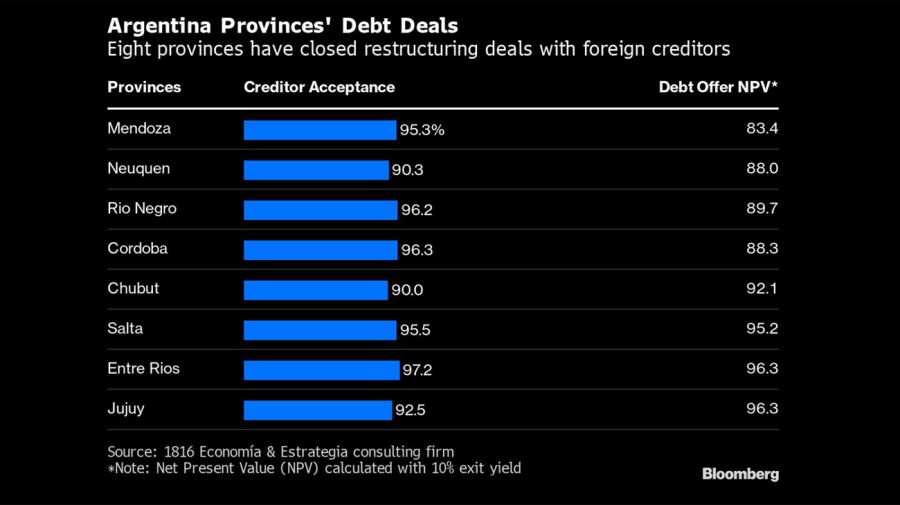 After Fernández took power in December 2019, Buenos Aires Province was the first to default on its debt payments in May. Days later, the federal government followed suit, along with several other provinces over the course of the next months.

Since then, the government and eight provinces have settled with creditors. Deals ranged from about 55 cents on the dollar for the government while many regional authorities agreed to much smaller discounts, between 83.4 and 96.3 cents considering a 10 percent exit yield. While a few small provinces also remain in talks, Buenos Aires Province, which offered to pay about 65 cents, is the last major holdout.

As economy minister, Kicillof negotiated a settlement with Spain’s Repsol SA after the government seized its stake in oil producer YPF SA in 2012, agreeing to compensate the company with bonds. He also struck a deal with the Paris Club of creditors.

Those events give some investors hope that he’ll eventually come around to an agreement. Still, his rhetoric remains combative. Speaking at an event on Friday, Kicillof called investors “unsupportive and intransigent.”

“Court claims aren’t going to lead to solutions to the root problems,” he said. “We remain open to dialogue to reach an agreement that’s convenient to creditors and that the province can pay.”

Even after the lawsuit was filed, Kicillof has little financial incentive to reach a settlement soon or offer concessions to creditors. The province realistically has no chance of tapping international markets for fresh funding, so it has little to lose in dragging out talks. And if a court ruling were to go against it, the province’s lawyers could appeal the case several times, and that could stretch the saga into the next gubernatorial elections in 2023.

“I don’t see a situation where Kicillof agrees to a deal that’s better than what the sovereign agreed to,” Ferro said.