Argentina’s dollar debt is getting hammered by global investors.

Prices hovering below 75 cents on the dollar and an average yield of 11.08 percent for its international bonds shows investors are uneasy despite an unprecedented US$56-billion credit agreement with the International Monetary Fund (IMG) and US$76.7 billion of reserves at the Central Bank. During a year in which emerging-market notes posted their best quarter since 2012, Argentina’s return of 2.1 percent year-to-date is one-third the average for peers.

Moreover, credit-default swaps are pricing in a 49 percent probability of non-payment over the next five years compared with just 22 percent a year ago. The extra yield investors demand to hold the dollar debt over US Treasuries – 8.58 percentage points – is the highest since 2014, when the country was in default and before Mauricio Macri boosted optimism with a presidential campaign that promised a return to economic normalcy.

Debt due in 2021 is trading below 90 cents and yielding 13.5 percent. If investors in that security are worried about getting paid, pity the creditors of the 100-year-bond issued at the peak of foreign-investor exuberance for Macri in June 2017. They’re currently priced at 71 cents.

Ecuador, which has historically traded close to Argentina among high-yield credits, is deemed more than 300 basis points safer in the bond market than its South American peer despite a history of defaults and a IMF programme a fraction of the size.

Here’s how that relationship has evolved over the past year:

Macri is now up for re-election in October after a first term that most investors consider to have produced mixed results, and Cristina Fernández de Kirchner, who oversaw the country from 2007 to 2015, is mulling a comeback. The prospects of a run-off in November between the former president and Macri appears to be the most likely scenario, according to pollsters who currently see it as a coin toss on who would emerge victorious.

Given that Fernández de Kirchner nationalised the private pension system, installed currency controls and blasted the IMF and foreign debt investors, it’s understandable that bondholders are unsettled. Macri’s approval rating has slipped below 30 percent for the first time since taking office and the bitter recession and stubbornly high inflation (54.7 percent year-on-year) are making it hard for even some supporters to justify another four years in office.

Aware of the poll numbers, Macri rolled out measures last week to freeze prices on some consumer goods, increase lending and lessen the blow of some planned utility rate hikes. Whether those moves, along with the Central Bank’s uber-restrictive monetary policy, will bolster the outlook enough to let him squeak by for re-election remains to be seen. 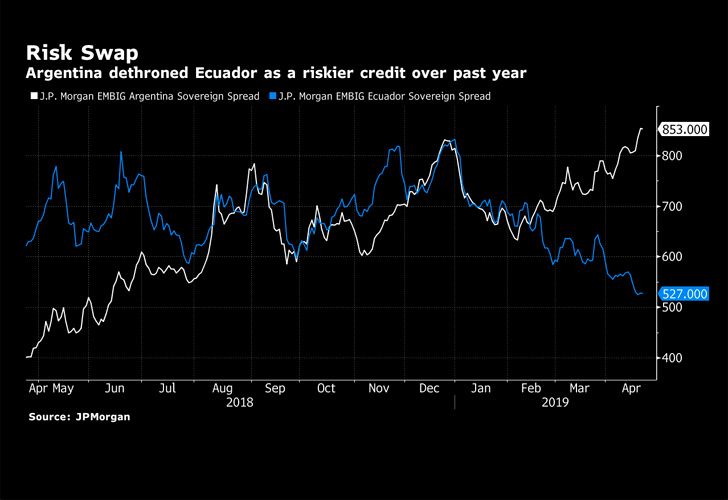 Gene-edited beer is next in Argentine crusade for GMO acceptance

IMF spokesperson on quarterly review: Targets in Argentina’s debt deal ‘have not changed’

by By Daniel Cancel, Bloomberg