That was the greeting that bank tellers gave to clients at one teller window on Friday morning in downtown Buenos Aires.

In the last day that Argentines had to pull dollar deposits or buy greenbacks with their devalued pesos, lines were visible outside several branches and the interiors quickly filled once the doors opened. One institution, conscious of the long wait, even laid out breakfast pastries, juice and Coca-Cola for clients.

It doesn’t matter if you’re going to vote for incumbent Mauricio Macri or frontrunner Alberto Fernández. Everyone has one thing clear, the coming months will be volatile – even by Argentina standards – and rather than risk having your money trapped or converted into pesos, it’s better to keep it in a safe at home ahead of Sunday’s vote.

Even though Macri imposed capital controls at the beginning of September to stem a run on the currency, savers are still permitted to pull US$10,000 a month from accounts. And those small withdrawals have multiplied this week. The Central Bank’s reserves have sunk US$2.2 billion this week alone, and while part of that is to pay government debt and comes from large corporations, the retail transactions have surged.

Argentines had already yanked US$11.8 billion – about 36.4 percent of the total – from accounts since the fateful August 11 primary election through Monday. Savers are also draining pesos from time deposits and local funds in order to buy more greenbacks, with more than a quarter of money in peso-denominated mutual funds exiting this week alone. 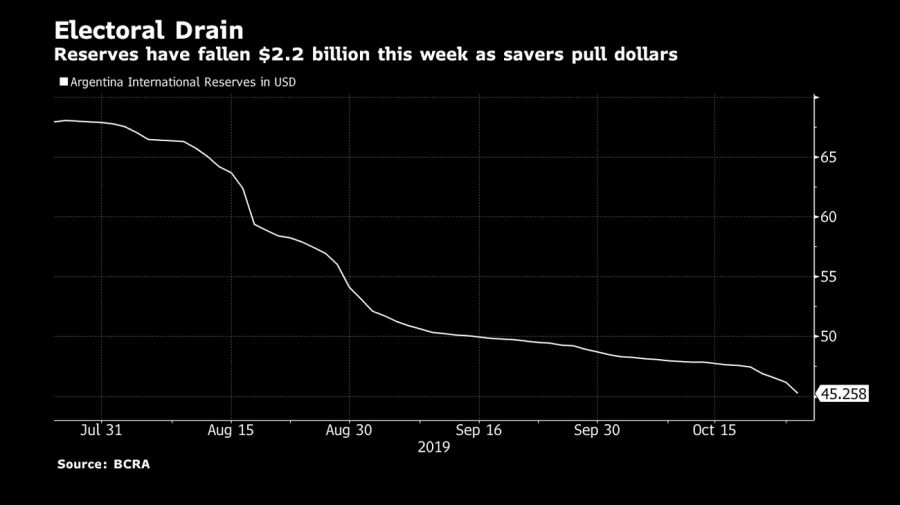 It’s not just crowds at the banks and nervous pedestrians on the streets trying to hide wads of cash where the hysteria can be seen. While discussing the different exchanges rates, a local TV network played roaring flames in the background with burnt bills flying through the air on Friday morning.

The peso has sunk 37 percent this year alone, most of that before capital controls were implemented. A variety of informal exchange rates used both by investors and people in the streets as part of a black market, trade well above the 60 pesos per dollar official rate.

On a popular late night talk show with economists and analysts on Thursday evening, the debate centered on how to defuse the economic “bomb” after the election and whether policymakers and Fernández’s incoming economic team should cut the green or the red wire.

With the Frente de Todos expected to win Sunday, focus is more on his initial comments than on the results. The indications he gives during his speech Sunday and whether he quickly assigns an economic team to negotiate a transition will be key.

The Central Bank is already preparing a menu of options to clamp down more on dollar purchases to bridge the gap to the inauguration on December 10, according to person with direct knowledge of the matter.

Whether it was the late 80’s or the early aughts, many have already seen severe economic crises cripple their savings and are wily financiers when it comes to knowing when to buy or sell dollars.

Back at the banks this morning, as clients were handed numbers and realised there were as many as 100 people in front of them, more than one remarked “this is craziness.”

Fernández is widely expected to win Sunday’s landmark presidential election and inherit a struggling economy. Mobius said there are plenty of investors who are willing to bet on Argentina if the price is right, and its debt will still have a market as a new administration takes power.

What we learned this week: January 9 to 16

Too cool for school, or too hot?