With the presidential election date just 24 days away, Argentine savers are increasingly choosing short-term instruments for their deposits.

Fixed-term deposits have fallen almost eight percent, from 1.26 trillion pesos prior to primary elections on August 11. These deposits pay approximately 60 percent annually in pesos. The proportion of deposits in instruments shorter than two months rose to 75 percent of the total, from 66 percent in January 2019, according to Central Bank data.

“The current trend is to have as much liquidity as you possibly can,” said Diego Chameides, a strategist from Banco Galicia, one of the three major private commercial banks in Argentina. “There’s surely additional pressure, as before any election. Those who are still able to dollarise will be doing just that in the next few days.” 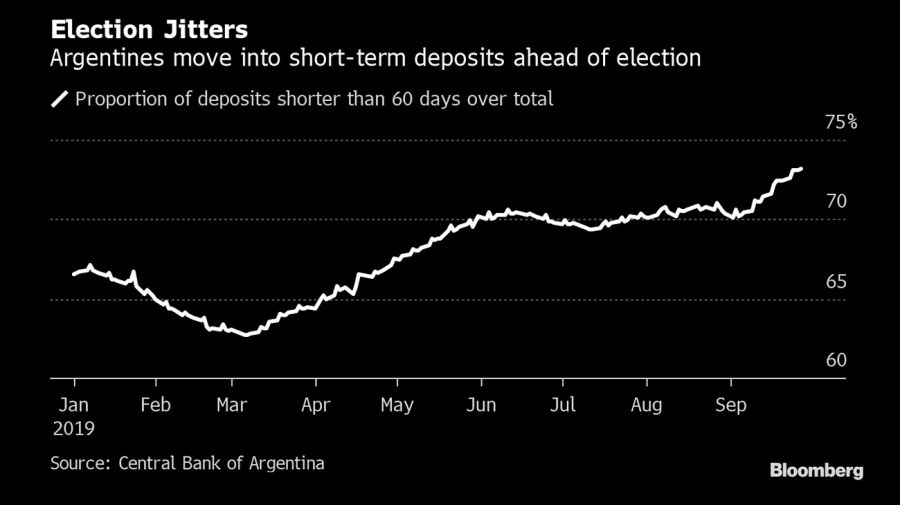 The proximity of the elections adds pressure to the Central Bank, which already sold US$3 billion in the spot market since the primaries. The fall in international reserves deepened this week to about US$200 million per day.

The quicker drop in reserves this week is due to a series of debt payments, including a Treasury bill denominated in dollars and some obligations with international entities, according to a person familiar with the matter. Since the primaries, reserves have fallen US$17.8 billion. The Finance Ministry is monitoring two key maturities before presidential elections, which correspond to Bonar 2020 and Bonar 2037 coupons due on October 8 and 18, according to the person.

The Central Bank is closely observing daily moves and potential exchange restrictions, said a person familiar with the issue who asked not to be identified because the matter isn’t public. This week, for instance, a new system will be launched so that banks are able to get a consolidated record of dollar purchases by individuals, and thus prevent people from being able to purchase amounts over US$10,000 per month.

Guzmán discusses debt with Pope Francis at the Vatican