Argentina’s currency depreciated the least in 17 months as the government stepped up efforts to curb inflation ahead of midterm elections.

The peso lost 1.1 percent of its value against the US dollar in June, its smallest decline since January 2020, President Alberto Fernández’s first full month in office.

Policy makers see slower peso depreciation, managed by the Central Bank in a so-called 'crawling peg,' as a key tool to curb rising inflation expectations. That’s a shift from the government’s focus earlier this year on negotiating pay increases with labour unions that aligned with the government’s 29 percent inflation target.

Consumer prices rose almost 50 percent in May from a year earlier, the fastest pace since before the pandemic.

Some investors say the approach risks spurring more pent-up inflation and paving the way for a sharp devaluation next year, once the November midterms are over.

Peso-denominated bonds linked to the dollar trade at lower yields for notes than mature in 2022 than those maturing later this year. Brokers say the lower yield is a sign that investors are pricing in a devaluation next year.

“The government will have to devalue and narrow the currency gap whether or not they win or lose elections,” says Leonardo Svirsky, head of sales and trading at Buenos Aires-based Bull Market Brokers.

Economy Minister Martín Guzmán has already rejected the idea of a steep devaluation.

“There’s no expectation that there’d be a devaluation after the elections,” Guzmán said June 23 in a local TV interview.

A Central Bank spokesman deferred questions on inflation policy to the Economy Ministry, which declined to comment.

To be sure, the government is relaying on several other unorthodox tools to mitigate inflation, including subsidies and price controls on a range of items, such as household utilities, gas, public transit and some food products.

Economists say the slower devaluation, price controls and the government’s money printing are stockpiling higher inflation for the future. For example, the peso has only lost 12 percent of its value so far this year, while consumer prices are up 22 percent over the same period. The exchange rate’s decline will need to catch up with the pace of prices.

“After the elections in November, the exchange rate depreciation is going to start to accelerate,” says Lorena Giorgio, chief economist at Buenos Aires-based consulting firm Equilibra. 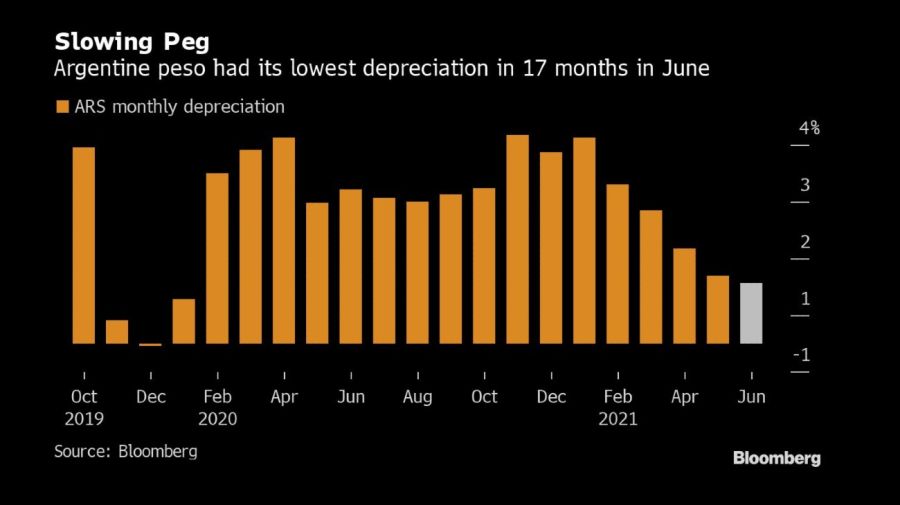