Argentina is resurrecting a page out of former president Cristina Fernández de Kirchner’s playbook by raising money for fiscal expenses through complex accounting manoeuvres and by selling bonds to the Central Bank that sceptics say are unlikely to ever be repaid.

The moves by President Alberto Fernández’s administration – which includes Fernández de Kirchner Kirchner as vice-president – were spurred by the International Monetary Fund’s (IMF) decision to grant the country US$4.3 billion of special drawing rights (SDRs), part of a campaign to help countries cope with the fallout from the Covid-19 pandemic and shore up foreign reserves.

With the money in hand, the government then undertook a multi-step process involving currency conversions, bond sales, debt paydowns and new borrowing that will enable it to spend US$5 billion – even more than the IMF granted. The manoeuvres ultimately added to the government’s obligations to the Central Bank.

In the past, Argentina was able to get the Central Bank to repeatedly roll over its bonds, essentially allowing it to borrow without ever having to fully pay back the debt. 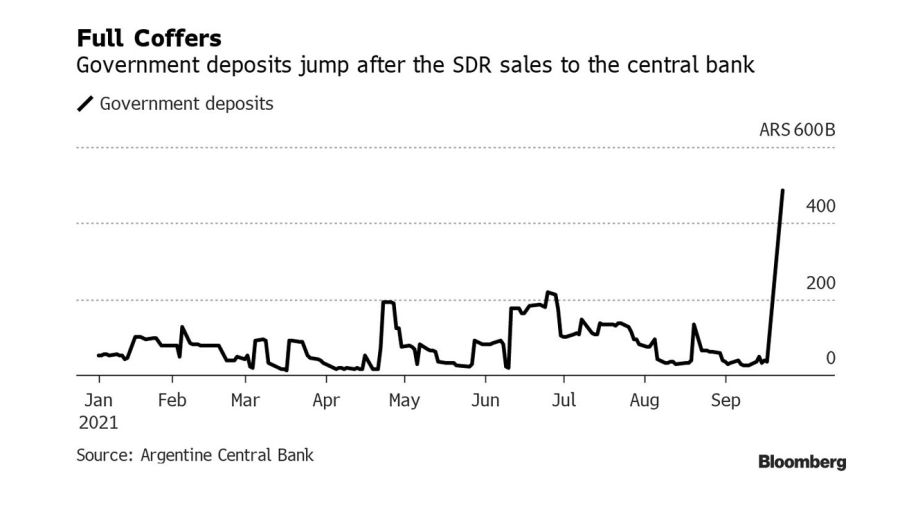 Argentina has a history of using creative accounting techniques to smooth over its fiscal situation, and this seems like another gambit along the same lines. Analysts expect the government to use the cash both to make payments owed to the IMF through the end of this year and to fund social programmes before the November midterms, when half of the seats in the lower house Chamber of Deputies and a third of the Senate are up for grabs.

The fiscal largesse risks adding to price pressures and undercutting the quality of the Central Bank’s assets.

For its first step, the government declared the money coming from the SDRs would be considered “current income.” That had the effect of essentially swelling its credit line with the central bank by 84 billion pesos (US$853 million) because of rules that limit policy makers from loaning the government more than 12 percent of the monetary base or 20 percent of the its annual income.

In a second part to the process, the Treasury sold the US$4.3 billion from the SDRs to the Central Bank, then sent the pesos it received back to the monetary authority to pay down the transitory advances it received so far this year. That opened more room in the Central Bank credit line. 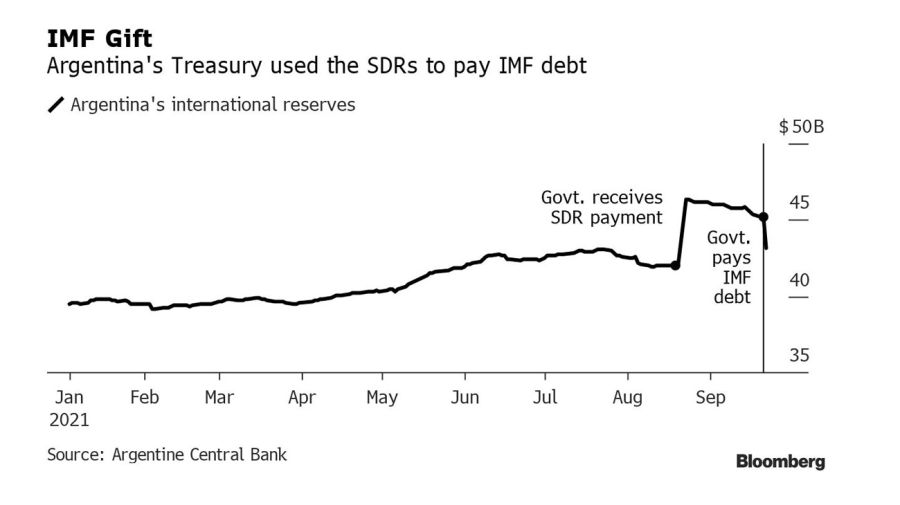 In the final stage of the transaction the government issued non-transferable, dollar-denominated notes to the Central Bank in exchange for the dollars it had earlier sold it from the SDRs. The Treasury has already started to use those dollars to make payments on a loan the country took from the IMF in 2018.

All these moves mean the government will be able to double-up on its use of a single asset: SDRs will have served both to pay the IMF debt and to cancel the transitory obligations with the Central Bank.

“Nothing like this has happened since the multiplication of the loaves and fishes in Galilee,” said Marcos Buscaglia, the founder of Buenos Aires-based consultancy Alberdi Partners.

The spending will almost certainly put upward pressure on inflation and further weaken the peso in the alternative markets people use to skirt currency controls, according to Fernando Marull, a director at Buenos Aires-based consulting firm FMyA.

“As the summer comes, the exchange rate will heat up and we’ll see pressure on the gap between the official and parallel rates,” Marull said. “The economy has surplus pesos and few reserves in the Central Bank.”