Opening November 16 and running until February 2020, Fundación Proa plays host to Anish Kapoor’s Surge, a collection of the influential British artist's work from 1992 until the present day.

With the support of the British Embassy in Buenos Aires and the British Council, UK ambassador Mark Kent co-hosted its opening alongside curator Marcello Dantas last weekend.

Surge is made up of four rooms, showcasing seven pieces by the Indian-born sculptor. Utilising only four colours – blue, black, red, and white – the exhibit relies on angles, perceptions, and movement to create the absurd, reflected in the doubt of each piece.

What is and what isn’t was the central theme of Surge.

"[Surge] has two senses,” described Kapoor in a recent interview with Chilean website Cultirizarte​. “[An] insurgent, of a wave that captures us. It is about the doubt of his eyes. Doubt says one thing and reason says another.”

The works are not without political comment either. Dantas inaugurated Surge by addressing the political instability in the region. It is a “sense of transformation and the emancipation of silence or one’s voice,” he said.

“With strong changes in Latin America, there was a sort of urgency in bringing this exhibition,” he added. “We’re living in times of insurgency, where things and feelings that were hidden are coming to the surface.”

Dragon, the first piece of the exhibition, consists of Chinese stones carved by river water. Coated in a deep midnight blue colour, the art is static, one constructed not by the artist but by water. The pigment further amplifies the surface of the stone, both highlighting and erasing the crevices of the natural rocks.

Following the depth of Dragon, the second room houses Svayabmbhu, a red block made out of wax that moves across the room, scraping through two adjacent columns before returning to its starting point. As the block moves slowly across, it leaves wax residue on the adjoining columns, creating an ever-changing image.

‘Contaminated cocaine’: One year on from tragedy that killed 24, little in the way of answers

“Each picture taken in this space is different,” explained Dantas.

The curator also compared Svayabmbhu to the political forces undergoing the region, ones that have come to light as protests take over the streets of major Latin American cities. “It is the perception of what is happening at all times. We don’t notice it, yet it leaves its mark and is there.”

The colour red bleeds onto the next piece of the exhibition, but not before experiencing a bit of vertigo.

Double Vertigo consists of two curved mirrors that “provoke a loss in our equilibrium; the mirrors change our spatial perception and distort all of that around us.” The image is constantly distorted as one walks through the convex mirrors, being present and at the same time lacking in space.

The theme of mirrors is continued into the last room, with Non-Object. A steel rectangle, centered in the last room, is polished to look like a mirror, creating distorted reflections of its image.

The lack of a fixed reflection then creates a statement of itself. “It’s a mirror that doesn’t reflect itself, you don’t see yourself in it,” explained Dantas. “It makes you doubt what you see.”

For Kapoor, it is in this sense that the piece becomes a non-object; it is the appearance of a space, that apart from new, is also virtual due to its infinite limits.

Shooting Into the Corner II takes the shooting literally; located at the end of the room, a canon is angled towards a corner, where red splotches drip down the wall. The use of red in the violent context alludes to human blood.

The continuous evolution of the piece as a red wax bullet is shot into the corner hourly points to its condition of the present. “It is not evidence of something that is in the past; in reality, it’s happening while the spectator is present,” explained Dantas.

It is this that points back to the central theme of Surge – doubt. The question of the present, past and future.

When I’m Pregnant, the next piece in the exhibition alludes to the uncertainty in the future. A white protruding half-sphere, the shape appears non-existent if viewed from the front. As one walks across it, seeing the shape disappear before reappearing, the questions of doubt and perception remerge as the exhibition’s central theme.

In contrast to the dominant white of When I’m Pregnant, L’Origine du Monde consists of a blue cavity of unknown depth. Located in the inclined wall of the second floor, this site-specific piece captivates the attention of onlookers, shifting shapes as one views it from the front or side of the room.

“There is a depth, an assumption, that pictures cannot simply capture,” lamented Dantas.

Despite the exhibition itself being displayed across the region, the curator specified that the current showings were made to accommodate Proa. This was key for L’Origine du Monde: “The architecture of the [of the building] is shaped like that,” at an incline that allows the image to change from a circle to an ellipsis as one moves from center to corner.

At the end of the exhibition – perhaps because of the French title or Dantas’ final remarks – attendees inevitably compared the presence of doubt to absurdism. “It is the city of Camus.”

* Surge is showing at Fundación Proa until February 2020.  For more information, visit https://www.proa.org/esp/ 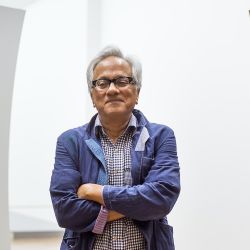 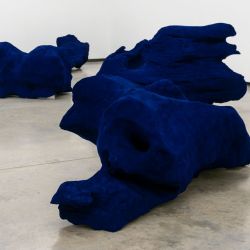 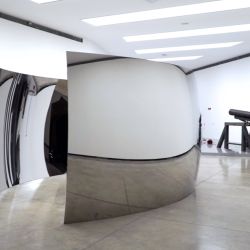 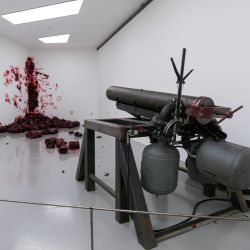 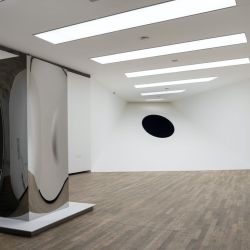